What was left of Mellona has been surviving but failing to thrive.  I've seen so much evidence of hive beetle problems that I have been going after the hive beetle using the Sonny-Mel trap and AJ's but haven't opened the hive further for fear of releasing more beetles.

When I opened the hive to check on the traps today, I could see wax moth detritus and was quite alarmed so I looked into the hive.  The bees were living on eight frames - four in the bottom box and four above in the next box.  The rest of the hive was filled with wax moth, slimed honey and a lizard.

I decided the only possible hope for this hive was to give them a new home.  I took the hive completely apart.  Here's what the slatted rack looked like - gross, gross, gross.  I invited the lizard (I think it was a skink - see photo about 5 down on this link) with a nudge out of the hive with my hive tool. 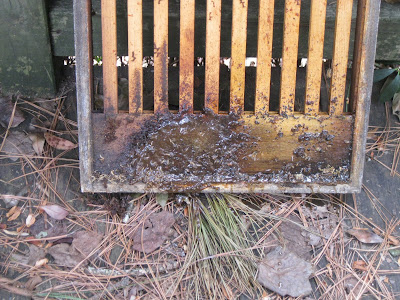 Here are two of the frames covered with wax moth web and mess. 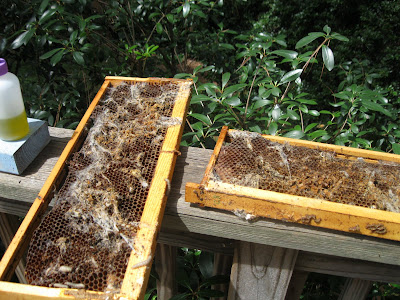 I luckily found the queen on the first wax moth covered frame.  I coaxed her onto a drawn frame that I had waiting for her and put her into the white box on the bottom.  I then added or shook bees into the hive.   I put a few frames from the old hive in that showed no wax moth occupancy and weren't slimed.

I shook bees into the hive from each frame.  As you would expect, many bees did not want to leave their box, so I stood this one on its side to encourage them. 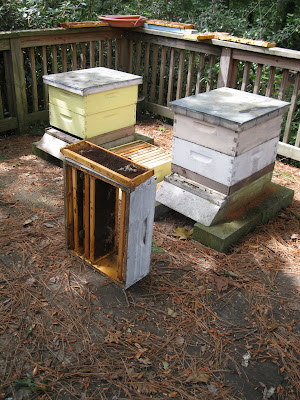 So the bees and the queen are now in the bottom box with drawn comb and two frames of honey.  I'll probably take a frame of brood from the Blue Heron hive, if there's one available in the medium box on that hive and add it to this hive.  The top box is an empty box serving as a surround for the Sonny-Mel trap and the baggie of sugar syrup that I put on this hive to feed the bees that are there.  I do have a shim that I could use in place of the empty hive and that would give the bees less room to have to protect. I'll change that when I get home from work today.