I arrived in Rabun County on Thursday and stopped by the Community Garden to check on the bees. They had, of course, gone through the syrup I left for them when I was there the first weekend in October. I put two bags of bee tea on the hive and left, expecting these bees to go through the syrup as quickly as my bees at Blue Heron or at Valerie's house do. 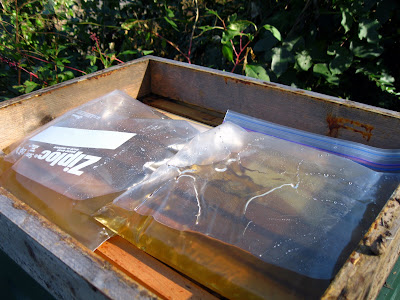 I also changed out the top "migratory" cover (I put it in quotes because it really was a solid bottom board acting as a top cover) for an inner cover and a telescoping cover anchored with the usual brick. 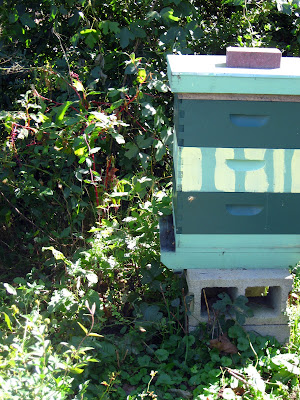 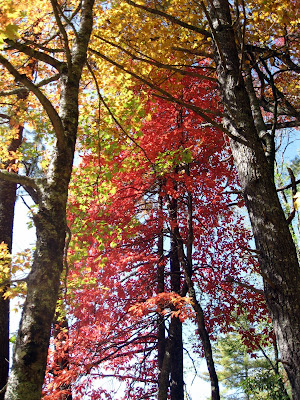 I expected to replenish the food at the hive on Saturday morning and then again before I left either Sunday evening or Monday morning.

I stopped by the hive on Saturday morning to find three dead bees on the landing board.  At first I was afraid of robbing, but realized that these were three full bee bodies - usually when robbing has happened the bodies are ripped in half or you see bee body parts.  These were girls who died but it was too cold to carry out the bodies.  So they left them on the landing until the temperatures rose later in the day. 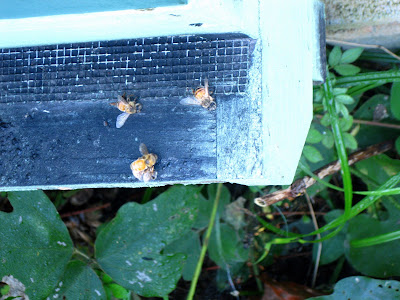 They had only begun to use the bee tea.  One baggie was more diminished than the other, but they were not ready for a new baggie. 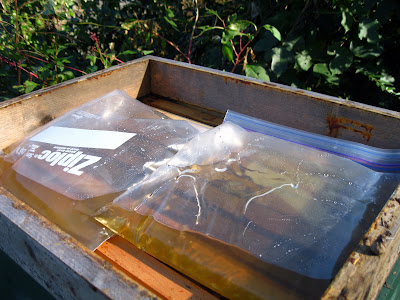 So now my plan changed to stop by the hive as I left town to return to Atlanta and change out the baggie rather than have an opportunity to feed them three times in five days!
On the way back to my house on that cold Saturday morning, I stopped by Osage Market - a farmer's market on 441 that is overflowing with fall vegetables.  Sadly this is my last visit for the year as the market closes for the season on October 31.  Bob Binnie, a well-known Georgia beekeeper, maintains an observation hive there.
Given the freezing weather of the night before, the bees in the observation hive were clustering and I took their picture.  Their cluster is actually a figure eight because of the flatness of the one-dimensional hive.   Seeing them really made me wish to have an observation hive - maybe next year. 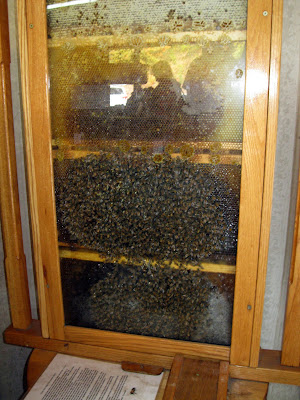 The weather stayed cold while we were there - after all, it is fall.  So when I returned to the hive on Sunday afternoon as I drove back to Atlanta, the bees still had not emptied the two baggies I had left.

If these same baggies were on an Atlanta hive, the food would have been moved to comb practically overnight.  But it has been too cold in Rabun and doesn't warm up enough for bee action until the middle of the day.

This may be my last chance to feed these bees because I won't be back until the first weekend in November. So I took the most diminished baggie off of the hive and replaced it with a very full bee tea bag (about 2 1/2 quarts).  Here's the baggie I took off - the bees are still feeding at the slits even as the baggie is on the inner cover. 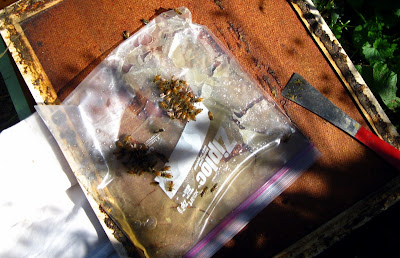 The full baggie and the remaining amount in the other baggie will at least help them since the afternoons are in the 70s so they can move the syrup around. 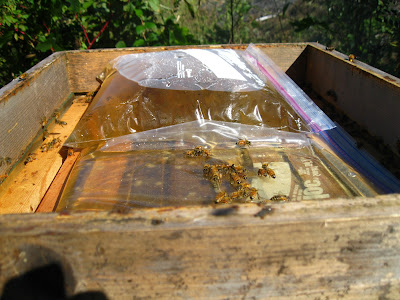 I think this hive remains too light for winter survival.  I'm going to try to address this issue when I return at the beginning of November - maybe by putting an inverted jar or jars above the cluster on end bars to allow feeding during cold but not freezing days.  Jennifer Berry talked about doing this at our most recent bee meeting.
To do this I'll need to put a medium or deep empty super to surround the feeding jars.  I wonder if for insulation purposes it would be a good idea to fill the empty space around the bottles with crumpled newspaper or if that would drive the bees crazy.  I'll put a post on Beemaster and see what response I get.

Email ThisBlogThis!Share to TwitterShare to FacebookShare to Pinterest
at 8:44 AM
Labels: baggie feeder, bee tea