The Pollen Basket on the Bee

Feeding Topsy was my mission the other day and I was pleased to find the bees falling all over each other trying to bring pollen into the hive. We have lots of aster - goldenrod and other varieties - blooming right now in Atlanta and these bees are taking full advantage of it.

The bees are crowding each other trying to enter the top bar hive in the photo below. 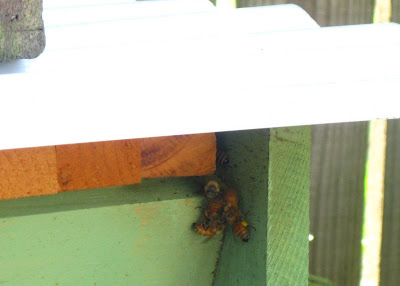 Although it is called the pollen basket, the bees don't actually have a basket on their rear legs. Instead it's a depressed area called the corbicula on the bee's hind leg. Before she heads for home, while still on the flower, the bee uses her forelegs to clean the pollen from her head and thorax. While she flies home to the hive, she passes the pollen from her forelegs and the back of her thorax to her middle legs.

She does all of this in flight - no wonder the old saying is "Busy as a bee." The bee is working hard enough to fly home, but in addition she is moving pollen the while. 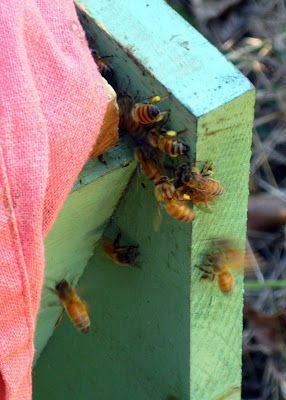 Because the pollen basket is an area rather than a basket, you can see on these bees that the pollen is packed in many different shapes coming into the hive. 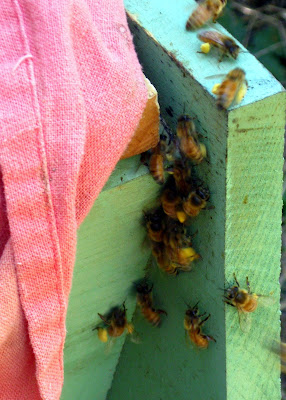 At first in order to keep the bees calm as I opened the bars where the food is kept, I draped the hive with this red dishtowel.  It's good that bees can't actually see red, or they would have been madder than they actually were.

I looked over at the area of the hive entrance while I was putting in the food and bees were buzzing and collecting in large numbers in front of the red towel covering their entrance.  I had blocked them from coming into the hive!  As soon as I realized I had done this, I folded back the towel and everyone was happy again.