We're in early winter phase in Atlanta. The nights are in the high 30s and low 40s but the days soar up to 69 or so. The temperature doesn't rise to flying temperature until the middle of the day. There is, of course, nothing to forage but the bees do fly to relieve themselves. I also wonder if they are generally exploring to see the state of the world at large.

My nephew Ben and his fiance, Stacey, were here this weekend, so they wanted to see the Blue Heron hive. We walked the trail over there - two Eagle scouts have made improvements to the trail that are so wonderful - and then visited the bees.

Here are Ben and Stacey, appropriately attired for the visit. 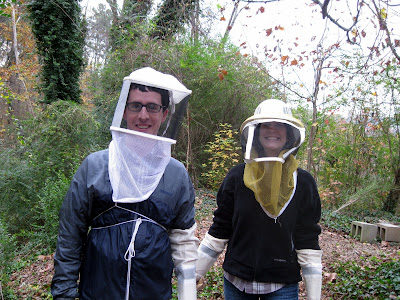 My hive had bees flying in and out - I saw at least 20 when we first walked up. It was about 59 degrees when we arrived at the hive.
They had emptied the baggie and almost consumed all of the bottled syrup in the interior Boardman. However, clearly it's easier for them to access and use the baggie feed.

I replaced both the baggie and the jar below and cut three slits in the baggie. 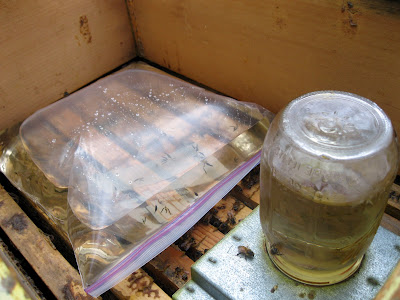 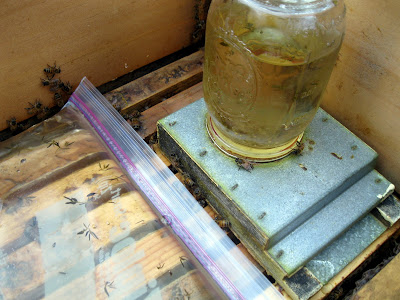 Julia is on vacation and asked me to check on her bees. I did not see a single bee coming out of the hive and her feeder was completely full. She asked me to take the feeder off, but I didn't have a reasonable way to dispose of the sugar water, so I left it there. I'm really worried that the hive has died. 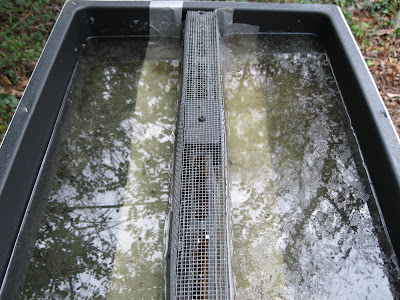