When I arrived at Valerie's house today, it was 64 and the bees were flying in and out of Topsy. I saw one bee with pollen on her legs. I don't know what the others were doing. With the severe cold nights over the weekend, I imagine there is no more aster nectar.

You can see the bees at the entry in the photo below (if you can't, I put a red arrow pointing to them). There was a constant entry and exit at that end of the hive the whole time I was there. 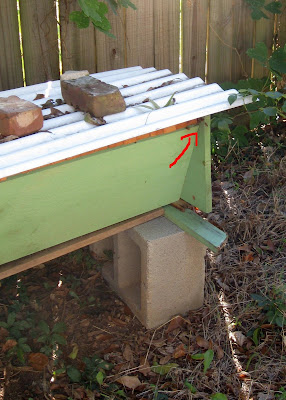 Both jars of syrup were empty. Since we are having flying temperatures every afternoon this week, the bees are likely to be able to use this syrup, so I replaced both jars.

As a nod to the colder weather, I moved the follower board closer to the actual hive to help shrink their hive space. I didn't get it as close as I'd like but I'll get that done next week. 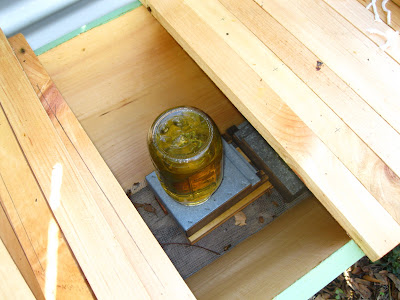 I traded out the wavy plastic cover for this newly constructed hive top. It was awkward and a little heavy, not like the wavy plastic. I may not like having this on top of the hive. When I tried to put it on the first time, I knocked against one of the top bars at the unused end of the hive and the bar dropped into the hive, necessitating my removing the top, replacing the top bar and essentially starting over again.

Doesn't it look more effective, though, than the white plastic one? 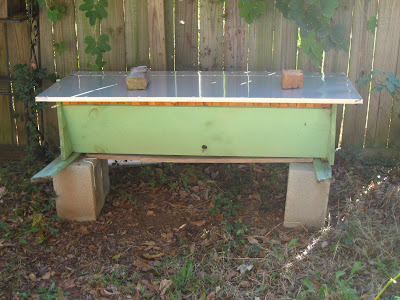 Here's a side view so you can see the supports and the amount of air space between the top and the top bars. I hope this helps the bees stay warmer than that flimsy plastic. 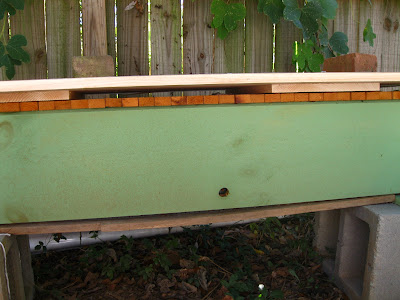