When I had the table at the science fair at Montgomery, I drove around for a couple of days with bee equipment in the back of my car.  I had a nuc with old comb in it; some honeycomb; some drawn frames out loose in the car.  Even my grandson, when he rode in my car a couple of days after the fair said, "Oh, Grandma, your car smells just like the bee hive!"

I miss that smell that goes with bee season, but spring is bursting out all over in Atlanta.  The flowering trees like cherries and pears are beginning to bloom.  Tiny red blossoms from the red maple are blowing down on the streets.

I went to Blue Heron and opened the hive for the first time.  I didn't do a deep inspection but did look at each box.  The top box was a surround for a baggie feeder and a Boardman (inside the hive).  The sugar syrup had not been touched.  The bees had not needed it despite our harsh winter. 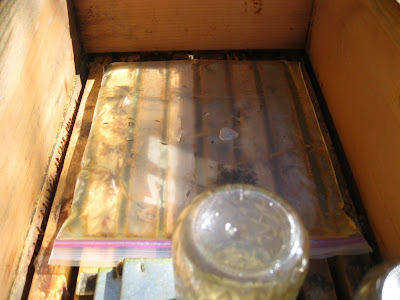 I removed the empty box, put the sugar syrup baggie into a bucket, and removed the Boardman.  Of course that means for a couple of days until I took it out of my car, the car had that warm wonderful bee hive smell!

The top box had a little honey stored but the box below it was completely full of capped honey - and heavy as could be.  The bees were still living in the bottom 8 frame deep.  There was lots of capped brood and although you can't see it since my camera was operating at less than optimal, the open cells are full of brood. 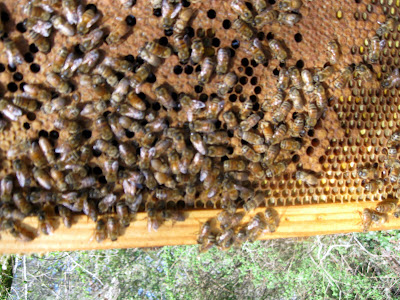 I only pulled up two frames but felt great about the capped brood and larvae. 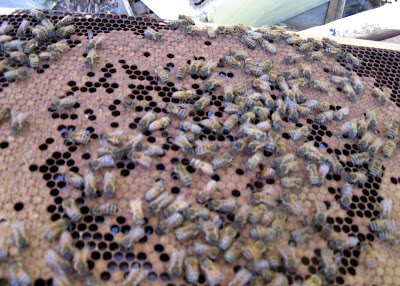 Concerns about this hive that must be addressed:
1. The full honey super above the brood box means that the queen is honey bound.  I need to checkerboard with empty frames or at least move the full box up to the top and switch the mostly empty top box with the second box.
2.  The honey box needs to be marked since that honey was made with "bee tea" and I don't want to harvest honey that isn't informed by nectar, but is condensed sugar syrup.
3.  This hive is doing well and I need to consider the possibility that it will swarm (thus the need to checkerboard).

Julia and I will inspect it and try to address all of the above issues.