How do you Get Beeswax Off of a Ceiling? (!) You Iron It, Of course.

As you know this has been a topsy-turvy month. I moved out of my old house and Jeff and Valerie moved into it. In the old house once upon a recent time, wax exploded in my kitchen, sending globs of wax all over the ceiling, cabinets and counter. What a mess!!

The house was going to be painted while I was at the beach this past week, so Jeff and I set upon the task of getting the globs of wax off of the ceiling. I learned a number of years ago how to get wax off of floors so I thought maybe the same approach would apply to the ceiling.

I bought a whole roll of brown paper, figuring we would need a lot.

We plugged in the iron and heated it up. I cut the brown paper into usable sizes. Even with the preparation, this was a hard task. It's not fun or easy to iron upside down like that while standing on a ladder. I had waited until Jeff could help me so I would have a spotter when it was my turn.

He's laughing in the picture - we both were - at the ridiculous nature of this task, but we managed to iron all of it off. 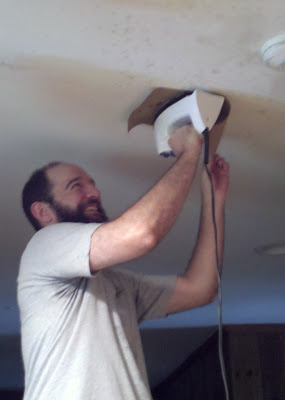 I told the painter about it before she came to give me an estimate. By the time she arrived at the house to do the estimate, she had checked with her painter colleagues and none of them had faced this problem before. She didn't have any idea what to do.

I told her Jeff and I would iron it off.

Imagine her surprise when she arrived on Monday to find nary a trace of ceiling wax. I immediately think of Alice in Wonderland in "The Walrus and the Carpenter" and want to say that forever more I'll read that line as "shoes and ships and CEILING wax, of cabbages and kings."

(I suppose it is important for the Walrus to talk of "sealing wax," however, among the many things.) 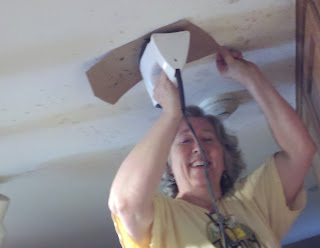 The miracle of ironing wax with brown paper is that the wax liquifies in the heat and soaks into the paper, leaving the ceiling altogether.

Does call for some awkward body positions, though! 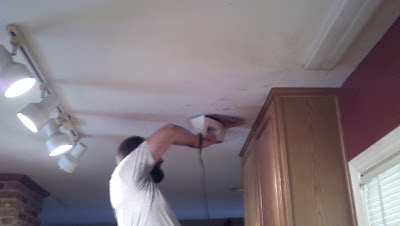 I will not have this problem in my new house. I didn't like the stove that was in my new kitchen because it had a gas oven but it seemed a shame to simply replace it. So I had a plumber come and install the all-gas stove into my bee part of my new basement.

Any further explosions will not be in a pretty cooking kitchen, but rather in a basement area set up purely for bee stuff and other messy business.  I plan to harvest honey down there, make lip balm, lotion, melt wax, all the messy stuff.  I can build bee equipment down there - it's really a beekeeper's heaven.

I had the stove moved down there and put in a utility sink right beside it so I would have hot and cold water.  There's a work bench - soon I'll post pictures.  I'm going to have about 1/3 of my basement devoted to bees.
Email ThisBlogThis!Share to TwitterShare to FacebookShare to Pinterest
at 10:14 PM
Labels: melting wax, wax removal