And for the Remaining Hive Inspections

Luckily it is Spring Break in Atlanta and lots of people are out of town.  I didn't have to be at the office today until 4 PM.  So today was a major bee day - I picked up five nucs, installed them in three places and inspected seven hives on this side of town.  Tomorrow (also a slow day) I will inspect the hives at Jeff and Valerie's (four of them), the hive at Blue Heron, and the hive at Chastain.

Next up was the other package installation at my house.  Unlike its 10 frame neighbor, this hive had not drawn out the majority of its box, so I didn't add a box.  I did see eggs and the queen - she was lovely but I didn't take her photo - in this box, so I feel fine about it.  They just aren't as energetic as the 10 frame.  It's funny - the package for the 10 frame had a ton of dead bees on the bottom, but this package had the least dead bees of all the packages I installed.  You never can tell about bees…… 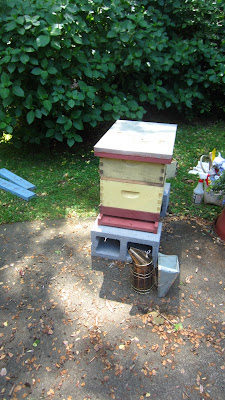 The little nuc split from Colony Square had failed to develop a queen, so I gave them a frame of eggs from Lenox Point last week.  I did have to drive the frame 25 minutes from my old house, so the eggs might not have been great when installed here. 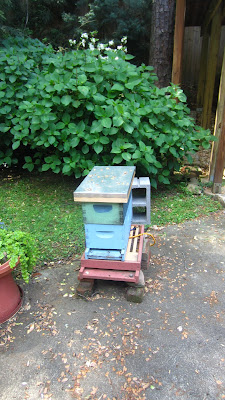 They had built a beautiful queen cell, however.  I very carefully returned this frame to the nuc and hope she'll do well once she emerges. 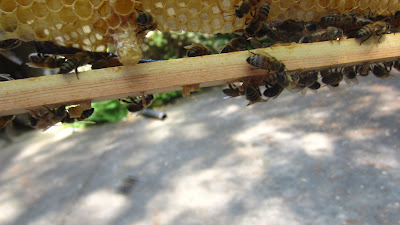 They had also made these odd attempts at a queen cell (see below in the upper center) but those are not queen cells. 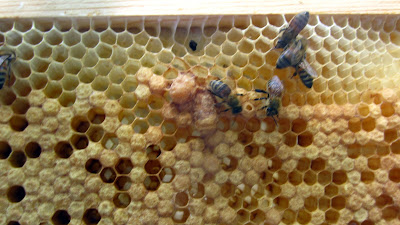 I also installed the last nuc this afternoon and saw the queen. She has a yellow dot on her back and is at 9:00 on the frame below. 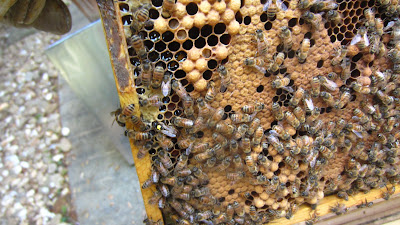 You can also see her on the end of the frame, pointing downward - isn't she lovely with her black abdomen? 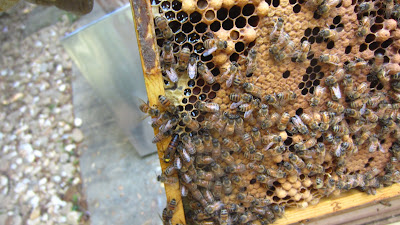 There were pretty cells in yellow wax in this frame.  These bees came from south Georgia.  I remember that our bees on the farm last year drew yellow wax early in the season. 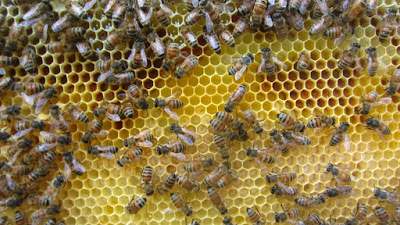 I also checked on the Decatur Swarm in the top bar hive.  They were doing OK - had begun drawing out about five top bars.  They had gone a little crooked at one end of all five bars, so I cut off the wax and took it inside.

I thought this was a secondary swarm and the state of the hive bore that out.  The queen had just begun laying (as in yesterday).  I only saw eggs and some tiny c-shaped larvae, and there was no capped brood.  I think this means she spent the last 10 days getting ready to go on her mating flight, getting mated and getting ready to lay.  Now she is working hard at it and hopefully this hive will succeed.

Below is the comb I cut out - I took it inside and will melt it down or use it for bee talks. 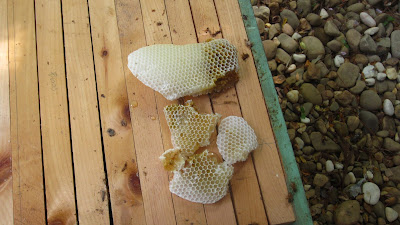 So after a long bee day and many bee blog posts, I bee tired and am going to bed!