Today it was finally an OK day weather-wise to check on the hives at my old house.  It was a deeply disappointing day.

First I checked on what we have called the swarm hive since we got a swarm in Dallas, GA for it originally.  I knew it was a dead hive so this was an autopsy while I waited for the temperature to move from 48 to 50.  I opened the hive and found that the first two medium boxes held eight frames each of capped honey that was in great shape.  The next box also had about half frames of honey.  But there were no bees anywhere.  No starved bees, no bees.

On the slatted rack I found a ton of dead small hive beetles.  I guess they planned on staying in the warmth of the cluster all winter and when there were no bees, they just died.  Amazingly, none of the honey was slimed in SHB fashion.  It was all untouched. 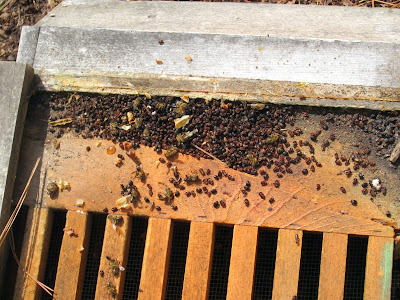 There were no bee bodies in the hive and on the screened bottom board were just a few. 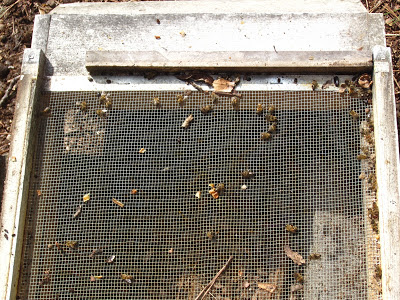 I packed all of the hive into my car.  I'll use one of the boxes of honey to demonstrate crush and strain when I give a talk on how to do that at the Forsyth Beekeepers on March 28.  The top box of honey I held back to put on one of the two live hives.

That hive had plenty of bees but felt really light.  I put the full box as the top box in this hive configuration.  There were a number of bees in the top box that I took off so since it only had one frame of honey still left (and that was only a partial frame), I put that box (with bees in it) over the inner cover so the bees would have access to that honey but it would not be the box they would rely on. 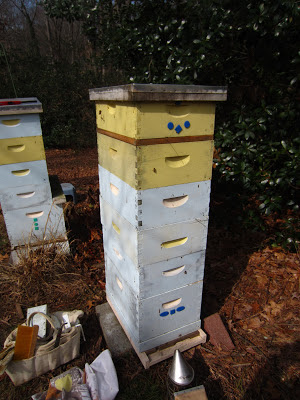 Then I opened Five Alive - it wasn't (alive that is).  There was not a bee in the hive, just like the swarm hive.  There were boxes of honey on it as well - at least 2 1/2, but I didn't have room in my car and needed to get back to the office (I have a real job when I'm not beekeeping!).  There were some dead bees on the SBB, but just a handful. 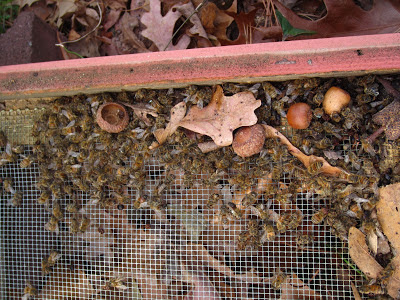 I'll go back over there and get that equipment and the honey.  I'll probably share those frames of honey with other hives that need feeding.

This is really strange.  I found the Stonehurst hives the other day sparse on bees with tons of honey (2 supers).  Today these two hives had NO bees - no brood, no nothing, but plenty of honey.  What could have happened to them?

Then I drove over to Chastain Conservancy to check on the swarm that Julia had installed in my hive over there on Friday.  There were no bees.  The swarm had not liked their new digs and had left.  A tiny cluster about the size of the palm of my hand were left in a top box - probably they were out foraging when the swarm left.  It was funny.  There were dead bees on the landing as if they had settled in and were carrying out the dead, but not a sign of the swarm. 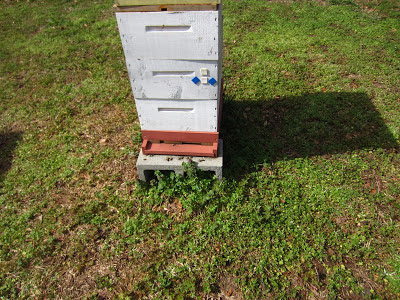 Meanwhile at home, the drone layer hive is flying like mad, carrying in pollen like mad, but has got a queen who isn't worth blowing up.

I do have empty basic hives everywhere some hive has died in hopes of attracting a swarm.  It is hard to hear of my friends who use oxalic acid, feed their hives, wrap them for our non-winter and have thriving bees while I am trying to go without poison, etc. and my bees are doing badly.

What a day!  Thought I'd report and go to bed....discouraged with this start of the year.
Email ThisBlogThis!Share to TwitterShare to FacebookShare to Pinterest
at 10:48 PM
Labels: bringing out dead, dead hive, drone layer