Hive Tally as of February 19

Today I went over to my old house to see what bees are flying.  Out of the four hives there, one died going into winter; Five Alive appears to be dead and smells dead (like small hive beetles were opportunists); the other two are alive and apparently well. 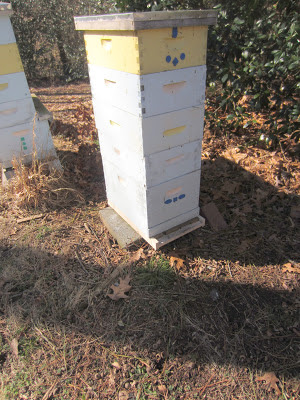 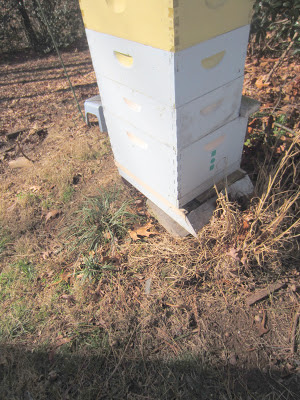 I then went over to the Chastain Conservancy to see how our bees were doing there.  My hive has died, but one of Julia's is still alive and well.  I had left honey on my hive, but it was still untouched (duh, the hive died).  I expect it went queenless into winter, but I'll open it up to see when I have more time. 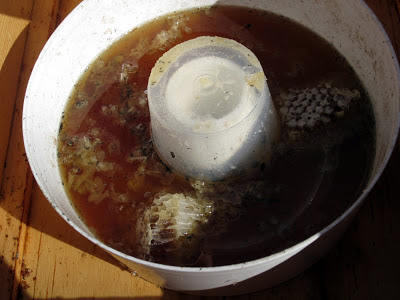 I ordered only one package this year and that was from Fatbeeman, so that I would have bees to put in this teaching hive.  Julia has also ordered a package from Don for the dead hive she has at Chastain.  We are driving up to get the bees together, which should be fun.

I thought you'd like to meet Chuck, the goat who lives behind my beehive at Chastain.  He is quite the climber and is standing on the roof of his goat house in the photo below: 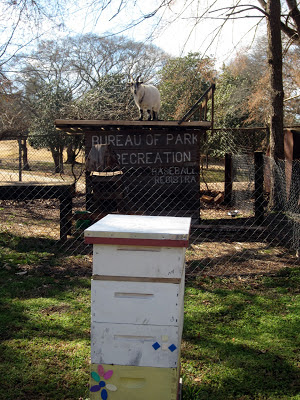 We'll install new packages here in the middle of March and have our first hive inspection for the Metro Atlanta Beekeepers club here on March 23.

I've ordered bees to replace the Chastain hive so I'll only have 8 hives as spring starts.

We will split and move the two hives at my old house in March.  I have yet to check in with Sebastian to see if there are bees flying at his house and I haven't been to Rabun County to check on those bees since it started getting a little warmer.

Note:  I heard from Sebastian today and the hive is ALIVE!  Can't wait to visit and see what's what over there.  I plan to split a nuc off of one of my home hives and split a nuc off of the hive at his house. Then I'll bring the nuc from his house to the Morningside Garden to replace the dead hive there and put the nuc from my house in his dead hive location.  Whoo Hoo.
Email ThisBlogThis!Share to TwitterShare to FacebookShare to Pinterest
at 9:35 PM
Labels: dead hive, winter bees