What Not to Do with a Smoker

My life has been really bee-busy lately and at the same time I've been really busy at work.  Also I keep my grandson on Wednesdays and Thursday from 3 - 5 and have my other two grandchildren at my house on Fridays all day.  So I've been going at a run for the last week or two between all of that.

The other day I went to the Morningside Garden to check on the bees.  I lit my smoker to inspect the hive.  I actually put a good bit of pine straw in it out of habit, but only needed to be there a very short time.

When I was done, I stuck a cork in the mouth of the smoker and threw it into the back end of my Subaru.  I ran home to do work there and didn't take any bee equipment out of the car.

Two hours later I went to my car to go back to my office.  I got in the car and was shocked that the car was all foggy on the inside.  At first I wondered what was going on because it wasn't foggy OUTSIDE the car.  Then my nose woke up and I realized the car was completely filled with smoke.  The cork had been knocked out of the smoker on the less than a mile ride home from the garden and it had been puffing along inside the car for TWO HOURS.  I could have won a smoker lighting contest with this smoker.

Now when I want the smoker to stay lit, it goes out every five minutes, but when it would have been perfectly lovely had it cooperated in that way, on this particular day, it stayed lit for over two hours.

Ten days later and my car still smells like a forest fire.  Every time I leave the car in my business clothes to go into my office, I think the people who come to talk to me are going to think I've been on a Girl Scout campout because I'm sure the smell comes into the office with me.

Today I took my car to a car wash where they do the wash by hand and are pretty meticulous with the inside.  The car still smells of smoke, but not as badly as before.

I am lucky - the smoker was right over the gas tank and at least the car did not catch on fire! 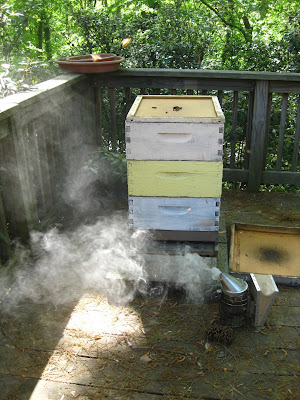 Note to all:  Do not leave a smoldering smoker in your car.  Worse things can happen than that your car fills with smoke, and that is certainly bad enough!
Email ThisBlogThis!Share to TwitterShare to FacebookShare to Pinterest
at 8:43 PM
Labels: smoker, smoker fuel, smoker lighting