Follow-up on the Queenless Half of the Even Split

Today my grandkids and I stopped by Ron's house to see how the two queenless hives were doing.  Colony Square had a queen cell when we moved it, so now three weeks later, the queen should have emerged, mated, and started laying.  The other hive at Ron's is the queenless half of Lenox Pointe.  (The half with the queen went to Sebastian's house.)

I only had fifteen minutes, grandkids and Hannah, my dog, with me so I couldn't do an inspection.  I went and observed both hives and took the top off of both hives but didn't take out any frames. 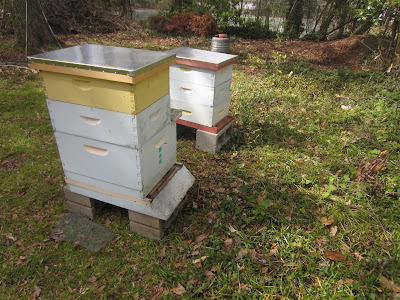 The hive on the left is Colony Square - you'll remember it as my most productive hive.  It's three years old and was moved from my old house.  When we moved it, we planned to split it but there was absolutely no brood as if the hive had swarmed or had some other problem.  We did find a queen cell - several of them - in the yellow box, so we moved the hive as a whole without splitting it.  The hive on the right is the queenless half of the even split of Lenox Pointe.  Both hives had bees flying in and out of them.

I didn't even take the time to light the smoker since I was not planning to pull any frames.  I took off the telescoping top and found what I found in both hives:  earwigs under the cover.

I lifted the inner cover of Colony Square and found that, true to form for this hive even in a new location, the top box had evidence of new wax (look at the second frame)
and appeared to be full.  So I added a new box.  The nectar flow is beginning and I don't want to dampen their enthusiasm for making honey. 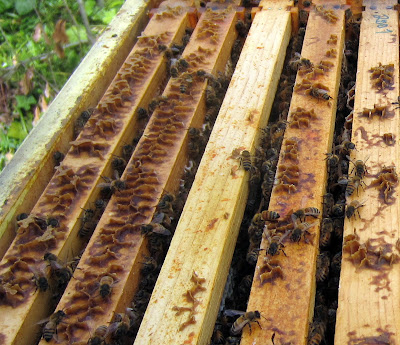 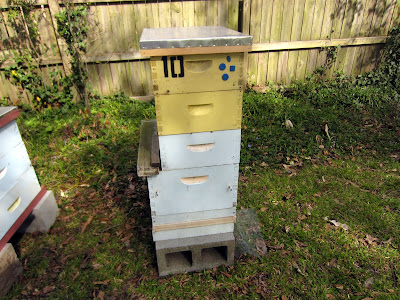 I peeked into Lenox Pointe as well, but saw limited numbers of bees and it was clear that they had not used the top box at all.  There were less bees flying in and out as well, as you might expect from a queenless hive as its population dwindles, awaiting the emergence of a new queen.  If I had had my smoker and time, I would want to look into this hive although for a queenless hive, it's really about a week too early to look in and see if there's a queen evident yet. 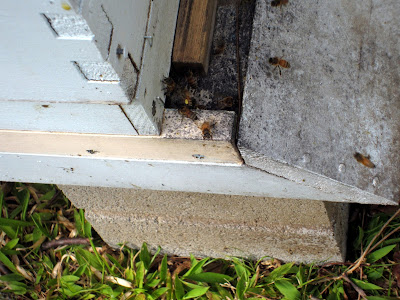 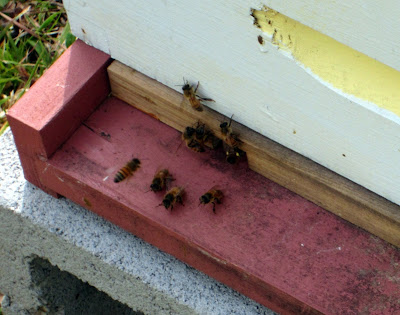 Both hives had bees bringing in pollen.  Since pollen is used for bee bread to feed larvae, it is often seen as evidence that the queen is laying, but I'm not sure of that in the second hive.

Next week I'll take the time to open Lenox Pointe and see if there's evidence that a queen emerged and is mated.  And when I do come to see this hive, I'll bring a frame of brood and eggs from one of my hives at home - perhaps the newly installed package - to add to this hive just in case.
Email ThisBlogThis!Share to TwitterShare to FacebookShare to Pinterest
at 8:12 PM
Labels: adding frame to queenless hive, earwigs, even split, queenless hive