Tom Seeley on Bees and Mites in the Forest

At Young Harris, Dr. Tom Seeley gave a fascinating talk on bees and mites in the forest. 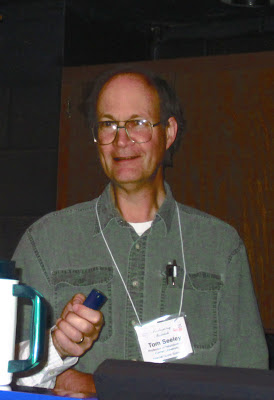 The first part of his talk was about how he finds bee trees in the forest.  He risks life and limb to find these bees with only his dog to rescue him should he fall in the woods or off of a tree!  He learned how to beeline with Edgell's book, The Bee Hunter.

He built a small box for putting a bee in and giving her sugar syrup.  After the bee has recognized the box as a source of food, she returns to her hive and recruits her sisters to come join her at the nectar source.  When a number of bees are feeding at the box, he closes the box up and moves it along the direction of the flight path they take when they leave.  Then he stops and opens the box and keeps on in this manner until he is really close to the bee tree.  Then his job is to look around and find where they are flying to.

He found wild bee trees in the Arnot Forest, owned by Cornell where he works.  He had found 11 colonies in 1978.  In 2002 there were 8 bee trees.  In 2003 he put up bait hives (this is where he climbs trees with no spotter other than his dog) to catch swarms thrown by the eight bee trees.  These bait hives had low mite counts.

He began to theorize about the low mite counts - what was it due to?


With our hive boxes, close together in apiaries, we subject our bees to drifting.  We also have low and large entrances, promoting more robbing.  We don't allow swarming, if we can help it.  More Varroa may be directly due to large brood nests and less swarming.

In trees, bees coat the inside of the hollow tree with propolis.  With our smooth sided hives, there isn't a need for propolizing the walls.  Propolis may protect the health of the bees in trees.

Since honey bees live differently, Seeley concluded that increasing colony spacing might reduce horizontal disease transmission.  Smaller hives and smaller colonies might result in less honey and more swarming but the pay-off would be better health.  If tall hives are used this will increase winter survival in cold areas.  Perhaps we should leave the inside walls of our hives rough to encourage the use of propolis to coat the hive interior, promoting better colony health.  Finally more drone comb (in the wild bees build 15% of their comb for the raising of drone) might result in better queen mating although might increase the Varroa.

There is more Varroa in crowded colonies because the drift of bees helps spread the mites from colonies that have fast-reproducing mites.

His take-home messages were:

As beekeepers we help the survival of the Varroa mite by:
There are feral bees and they are good for pollination, good for drone production, and through natural selection, resistance will arise in bees in the wild.

It was a great talk and I loved seeing photos of Seeley and his dog standing next to very tall bee trees.  Wish you were there!