In August, Jennifer Berry spoke to our bee club on the topic of Natural Beekeeping.  I had a hard time with her talk and didn't post about it, but I wanted to now before I get distracted with other things.

Jennifer Berry is Keith Delaplane's right hand person and a very good beekeeper with tons of scientific knowledge.  I think Jennifer Berry is so entertaining - she could be a stand-up comic quite successfully and so she's really fun to listen to, but this talk had me ready to jump out of my chair.

I should also say that when I was in college centuries ago one of my favorite courses (I was a philosophy major) was logic.  I loved logical reasoning and fallacies and really found it interesting to solve logic problems - my logic textbook was the only college text that I kept after college.

So when Jennifer started with a fallacy of logic, I had a difficult time.  The fallacy is called the straw man fallacy.

A straw man argument is one that misrepresents a position in order to make it appear weaker than it actually is, refutes this misrepresentation of the position, and then concludes that the real position has been refuted. This, of course, is a fallacy, because the position that has been claimed to be refuted is different to that which has actually been refuted; the real target of the argument is untouched by it."

What Jennifer said was that we don't keep bees naturally, do we?  After all, bees live in trees, not in boxes; bees get to choose where they live, but we choose where our bees live;  bees in nature requeen when they need to, but we decide when to requeen and give them a queen that is not their own;  wax foundation is not natural, bees are not native to the United States so even having them here is not natural, etc.

All of this was to prove that we don't keep bees naturally so practicing natural beekeeping is not possible.  This is the straw man fallacy because while all of those things may be true, none of them have anything to do with whether you use treatment or not in your beehives.  They are not related. 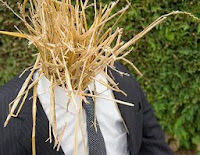 Proving that we don't start out with a natural situation does not mean that you therefore can't succeed at keeping bees without treatment.

She followed this by encouraging people first: not to believe everything you read on the Internet - probably a good piece of advice - and second:  to know what you are wanting when you purchase a queen.  Are you looking for a queen with hygienic behavior?  Are you wanting a queen who produces good winter bees?  What are you looking for in a queen?  Ask the breeder what he/she looks for in a queen that he/she produces.

Those two pieces of information were valuable and helpful to all beekeepers. 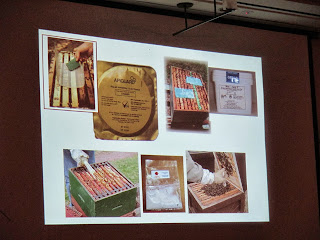 She went on to talk about the use of IPM, including screened bottom boards, freezing drone brood, all the usual suspects, ending with using chemicals, but she had lost me by then because I was so upset by her message to our many new beekeepers in the club that they can't keep bees naturally because, well, it just isn't possible since we don't start out in a natural way.