As I drove home in the Atlanta snow this afternoon, I talked to Joe Lamp'l of Growing a Greener World.  Joe took the MABA Short Course on the 18th of January and is preparing to be a beekeeper both in his own backyard and for his television show.

You may remember when he came to my house to film my bees.  At that time we talked about my helping mentor him as he gets started in beekeeping.  So today he called so that he and I could plan what he needed to order to get his bee endeavor started.  In the course of the conversation, he mentioned that he had just watched the movie, "More Than Honey," on Netflix.

As anyone who is watching the news knows,  Atlanta is shut down with the onset of the snow this afternoon.  Just about all businesses let their employees go home at about 2:00 so instead of rush hour happening over about a 2 hour period, everyone left at the same time.  Sadly, there are people still trying to get home (it's 11:25 at night now) and the Interstates are clogged and stopped.  Some school children have never gotten home today and are either spending the night at school or terribly enough, are stuck on the highway in their school buses.

Luckily I live about a mile from my office.  I also left at 2:10 and I didn't get home (a typical five minute drive) until 2:55!  Incredible.

So I am in my warm house and tonight decided to watch a gorgeously filmed movie: "More Than Honey." 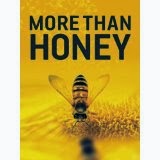 I watched it on Netflix, but it's also available on Amazon Instant Video and in other places.  I have never seen bees filmed so beautifully.  The movie opens with a video shot of a queen emerging from her queen cell, being assisted by the worker bees in the hive.  Every shot of bees is intimate and close up.  There is even a filmed drone congregation area and detailed film of the queen mating with the drones in midair.

If you have a chance, watch this movie.  There are lots of movies out there right now about how the bees are in trouble.  They all interview a commercial beekeeper, a scientist, a backyard beekeeper, etc.  This one is no different in how it covers this issue, but it is SO different in how intimately it is filmed.

Here's the movie's Facebook page and here is a page about the movie.  For a lovely bee experience, see this film.  The filmakers say that they went around the world four times to film this movie and the quality of it attests to that.