Bees at Tom's House - Second Inspection of the Year

When we first opened the hives at Tom's, we added a new 10 frame box to each hive.  These were foundationless frame boxes with one frame of drawn comb in the center of each box.

The first box has appeared to be the strongest hive so I wasn't surprised two weeks later to find that these bees had completely drawn out the new box and used all but the edge frames in the new box. 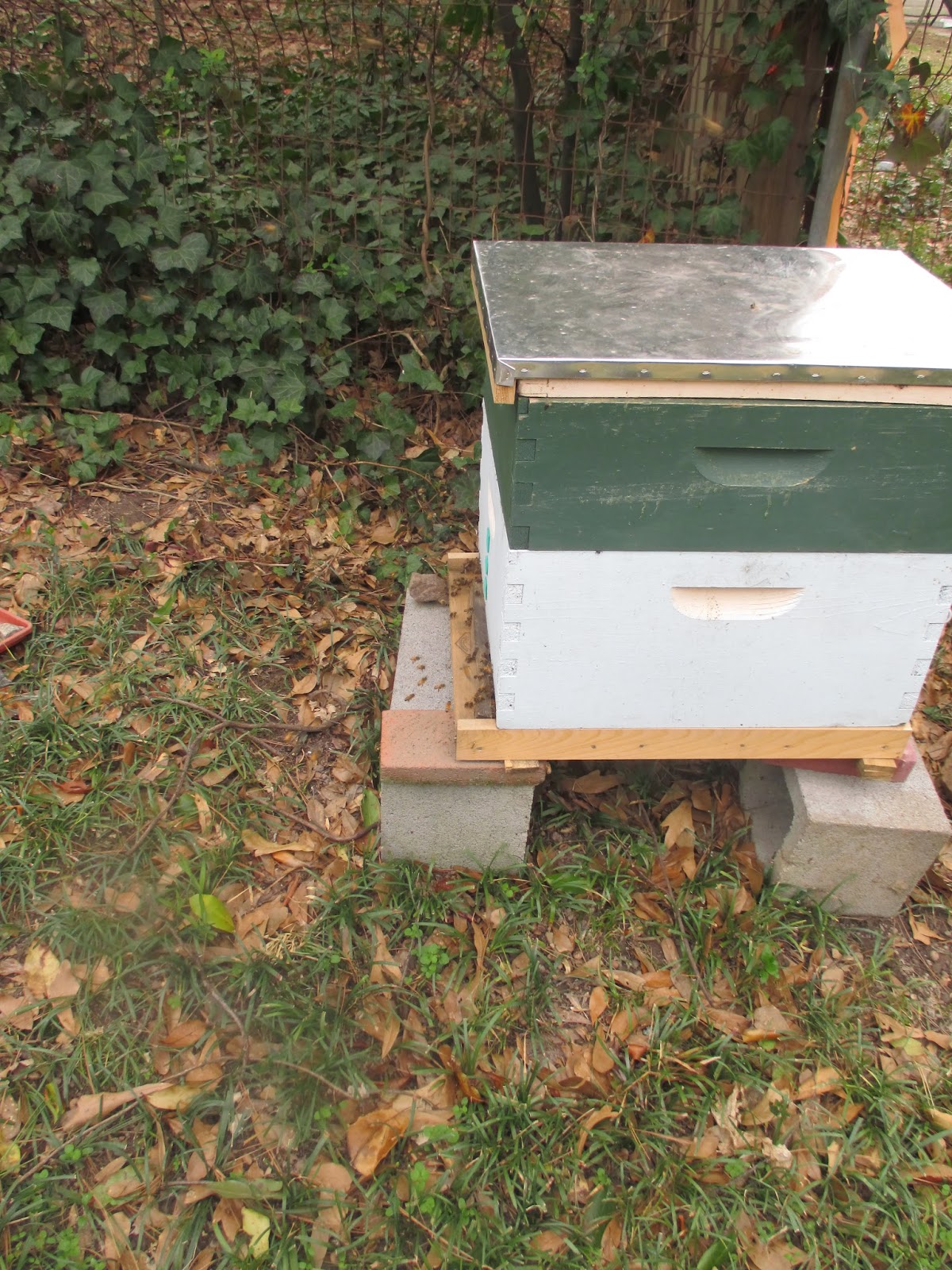 Here's what the last frame in the box looked like: 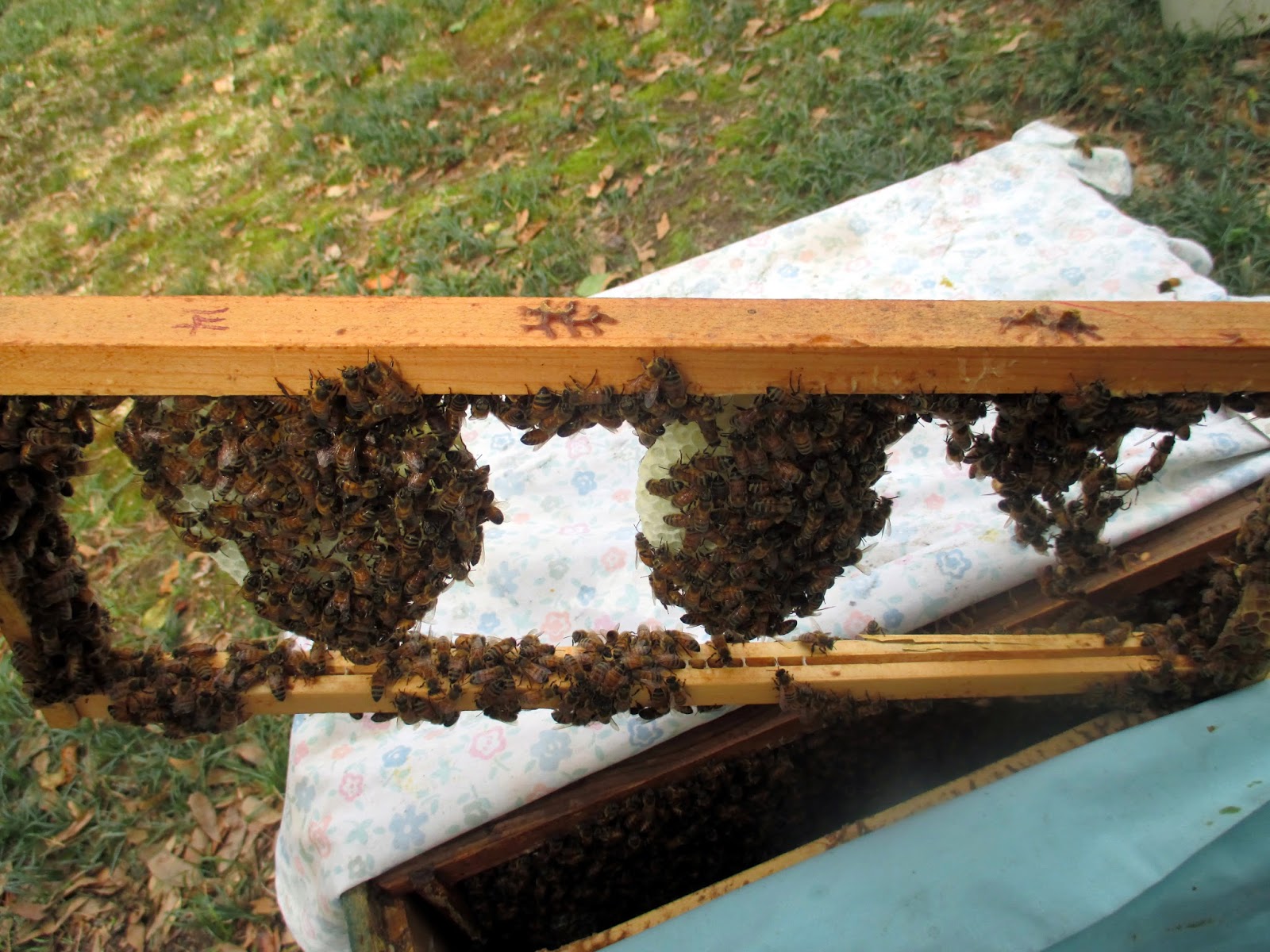 I love to watch the bees exuding wax and building the three teardrops with which they start most frames.  They are hard at work making wax and will fill it sometimes before the frame is completely filled, i.e., the queen will start laying or nectar will be stored in the teardrops before the rest of the frame has wax in it.

And then when I pulled the third frame in the box, there was Her Majesty!  I was thrilled to see her, long golden body, looking quite healthy.  And she laid an egg while I watched.  I carefully returned the frame to the hive, but not before taking several photos of her. 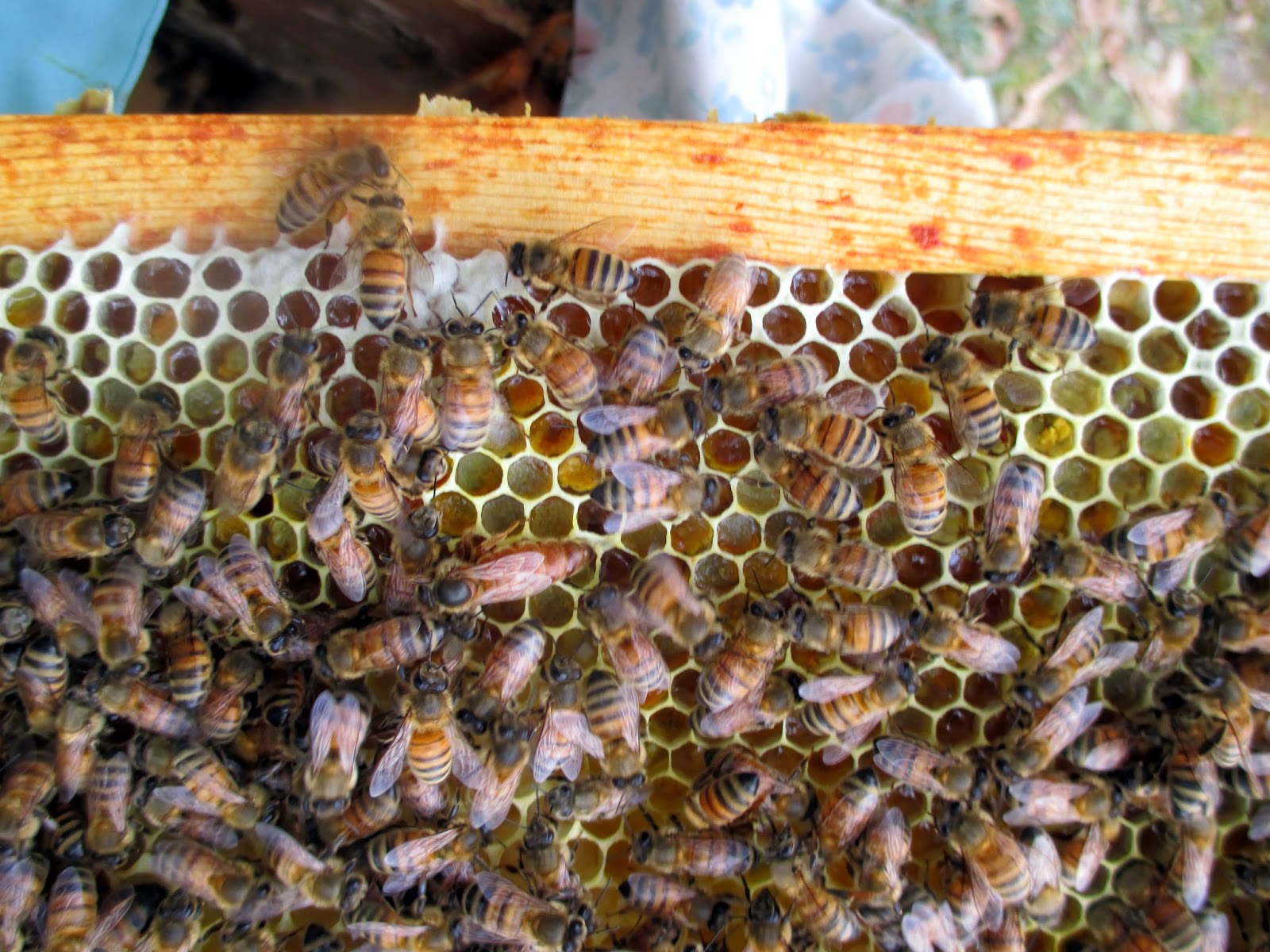 The second hive was built out almost as fully as the first.  They had made some crooked comb and I completely blame myself.  When you take frames out of the hive and cut out old comb, a remainder of wax is left against the wooden frame that suggests where the bees had built before.  The frames I put in these hives had been cut out but not "melted out."

As a result, I think these bees were following the guidelines left by some previous crooked comb builders.  It only has to be a problem on one frame and then the rest follow to match the first.  So one half of this box - five frames - had crooked comb at one end.  You can see it between the hive drapes. 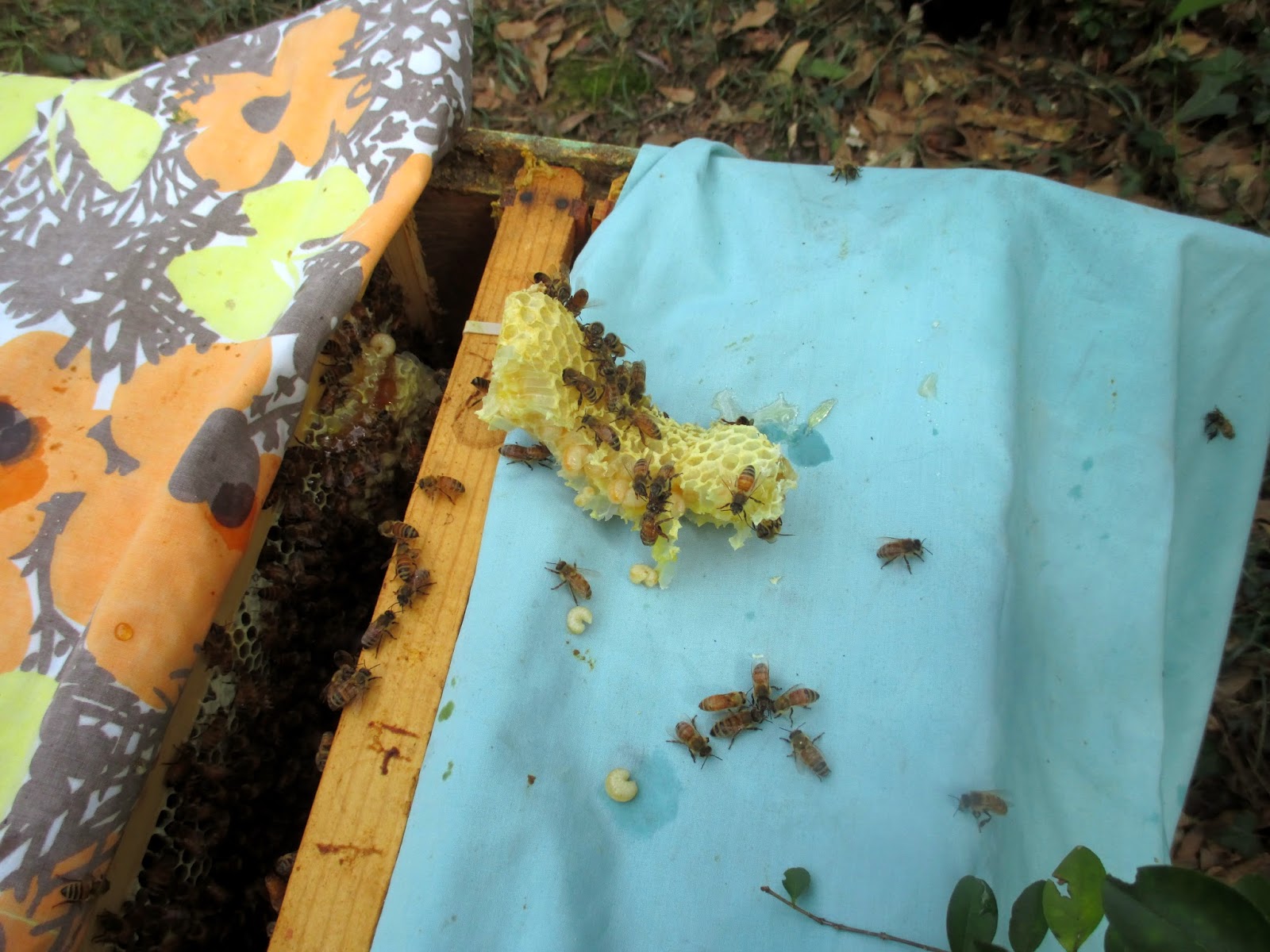 I hung each comb on the frame rack and worked on it there since I was alone and didn't have a helper to hold it for me. 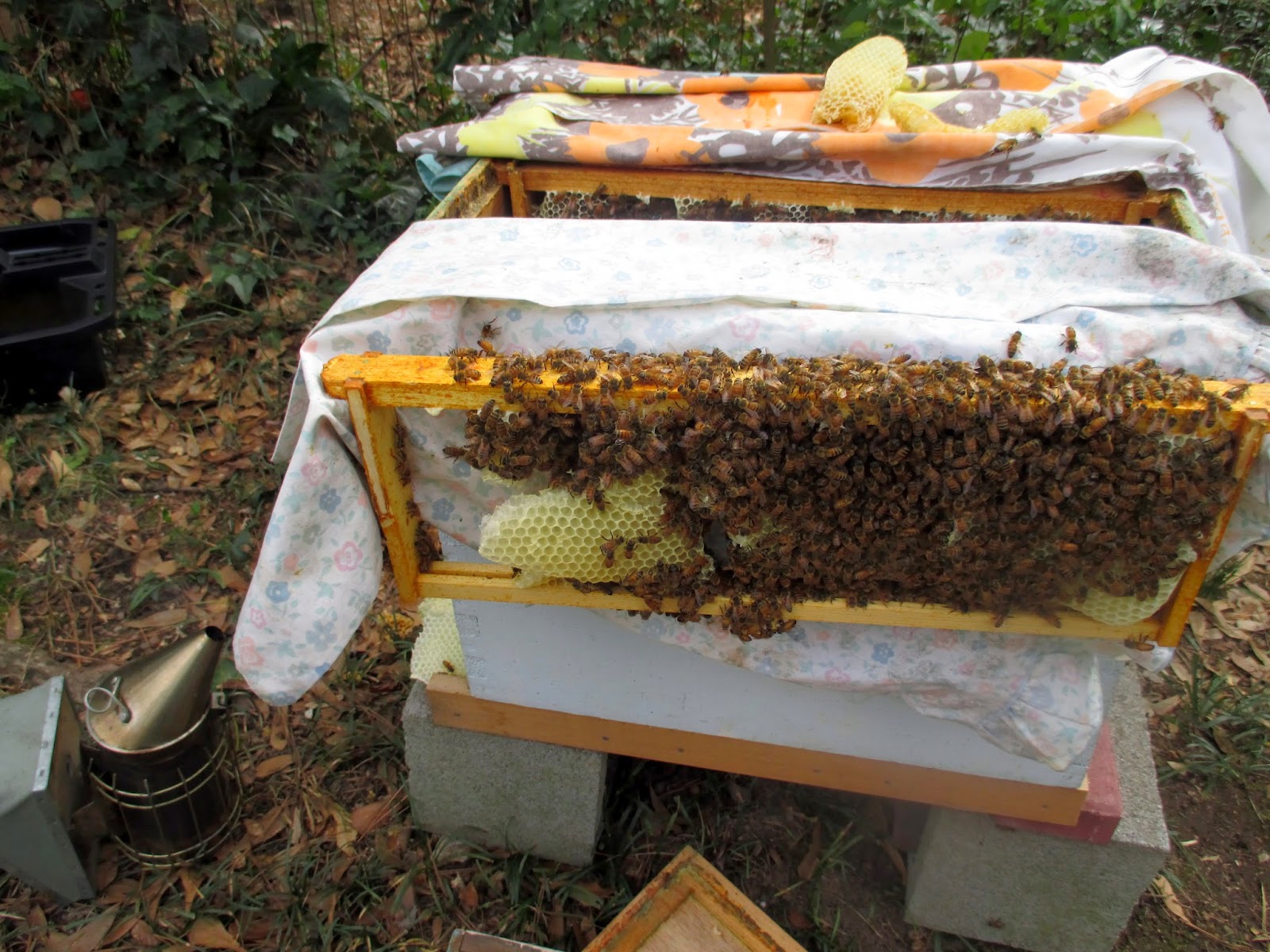 I cut out the offending comb and then rubber-banded the comb into position.  I did something else that you are not supposed to do, but I hope helped with the situation.  When I returned the five frames to the hive, I turned every other frame opposite of the way it had been sitting so that the cut out part was against straight comb on both sides.

This will confuse the bees as if I had rearranged their furniture without permission, but hopefully will encourage them to build straight comb. 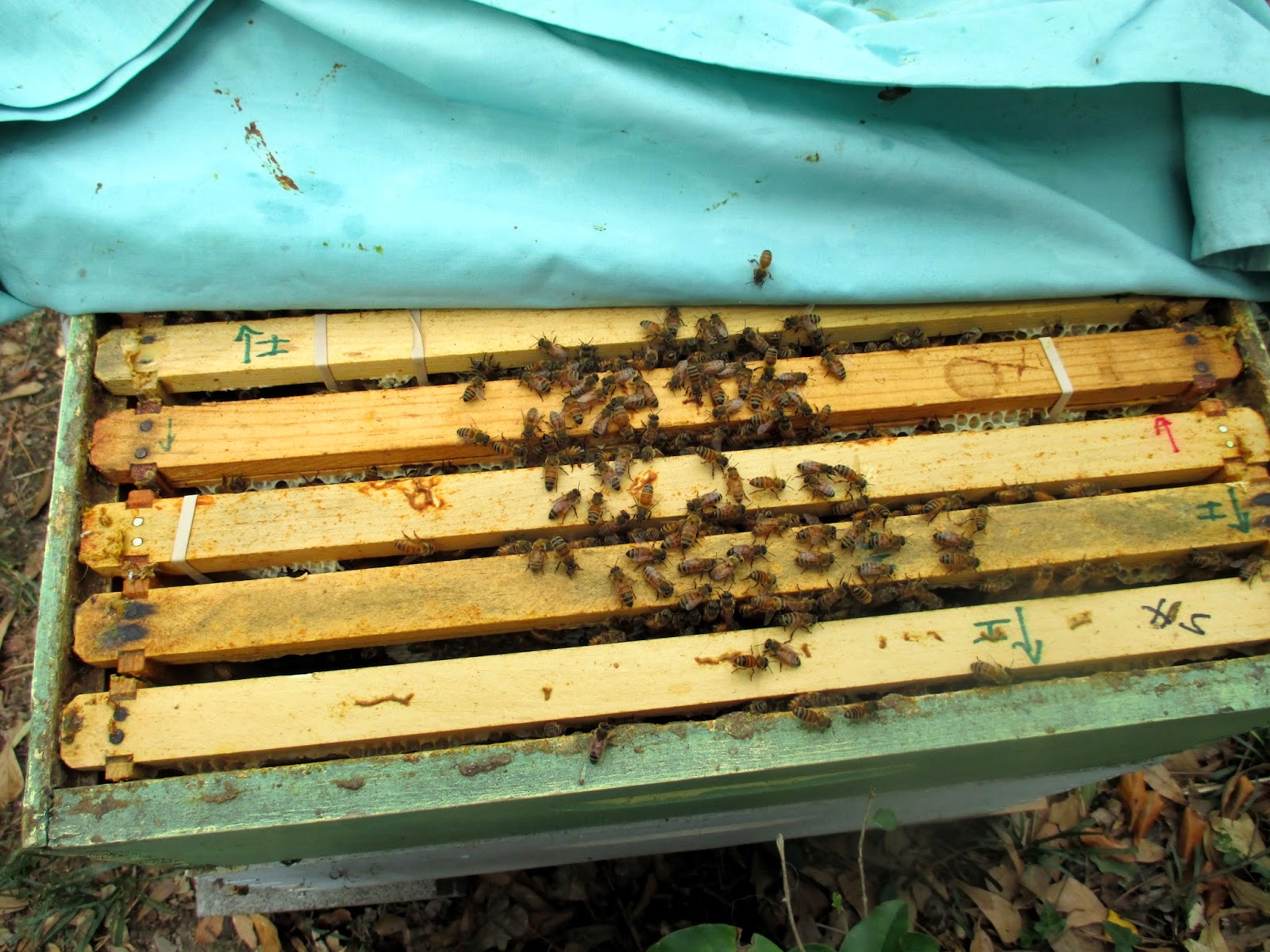 In the photo above, you can see how the rubber bands are at opposite ends in frames 5, 4, and 3.  Hopefully this will fix the situation.

I didn't see the queen in this hive - didn't even look for her because I was doing comb repair.  But the hive looked healthy and I did see new larvae.

The hives need new boxes and Jeff has them to put on the hives on Thursday which should be finally a warm enough day to open the hives.  The foundationless frames in the new boxes have been cleaned - which means that I have dipped the frames into boiling water for 30 seconds on each end to melt the old comb patterns.  Then I have glued in popsicle sticks.  Hopefully they will not build crooked comb in these frames.

These bees are doing great and I am happy.