Good Use for the Boardman Feeder

At this time of year, feeding the bees is not something anyone needs to do.  The bees in Atlanta are at the end of the nectar flow, but there is still some nectar to be had.  I haven't fed any bees this year in 2014.  All of my new hives were either nucs and were installed while we were having a nectar flow or the hives had overwintered and were just fine and not starving.

The Boardman feeder is particularly dangerous to use because it is like a billboard on the front of the hive screaming, "EAT HERE.  FREE FOOD!"

It's an invitation to robbing and that is a disheartening thing to happen to a beehive.

Last year at the Morningside Community Garden, we got complaints that my bees were showing up to take a swim at the neighbors' swimming pool.  They have a pool just over the fence from the beehives.  It's like Mr. McGregor's Garden - the bees feel tempted by the chlorinated water and are determined to visit the pool for a treat.  Only instead of going through a hole in the fence like Peter Rabbit, they fly right over it!

So to solve the problem last year, I put Boardman feeders on the front of both hives.  I filled the feeders with water, each with a drop of Clorox in it.  The bees got their water happily from the Boardman's and the neighbor complaints disappeared.

Since that worked so well last year, I've done it again on the Morningside hives. 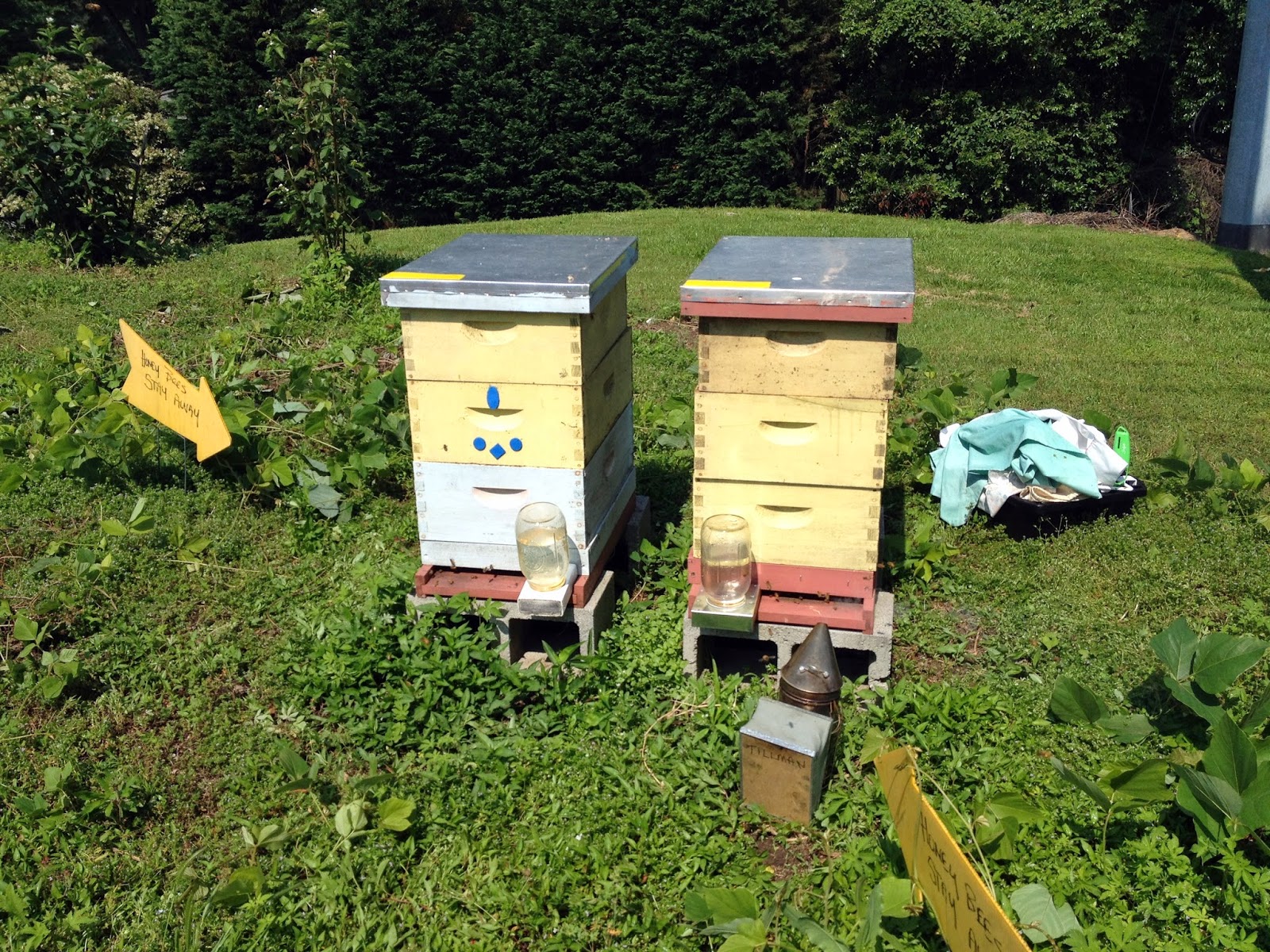 So far, we haven't heard from the neighbors.  I was away a couple of weeks ago and as I drove home I noticed that the top was off of the hive with the blue markings.  I walked up to check and found the top on the ground at the bottom of the hill.  The hives look in this photo as if they are on flat ground, but actually they are at the top of a hill, the dropoff for which is right by the blackberry bushes on the back left.

The top was lying face down at the foot of the hill about 15 feet below.  The hive was intact with the inner cover still tightly propolized.  I expect a storm blew the top off, but it seemed weird that it was located where the wheelbarrow and other equipment is kept and not directly below the hive on the ground.

So far it hasn't happened again, so I feel sure it was the wind.  Maybe someone saw the top and just moved it with the rest of the equipment????