My daughter, Valerie, and beekeeping son-in-law, Jeff, have bought a house.  Jeff had two hives of bees at the house they were renting and these bees had to move.  Jeff's new house doesn't have a good space right now for bees, so we needed to put the bees elsewhere.

One hive we planned to put in my friend Tom's backyard, where we had bees this past year.  One of the two hives had died and we wanted to replace it with one of Jeff's.  We planned to move the smaller hive to Morningside Community Garden where I had lost another hive.  I'll talk about that loss in another post and link it here when I do.

I have had a posterior tibial ligament injury all year and carrying the heavy hive down the hill in Jeff's backyard is not something I need to be doing.  We enlisted one of Jeff's neighborhood friends to help him load the hives into the car.

Gary was a good sport. 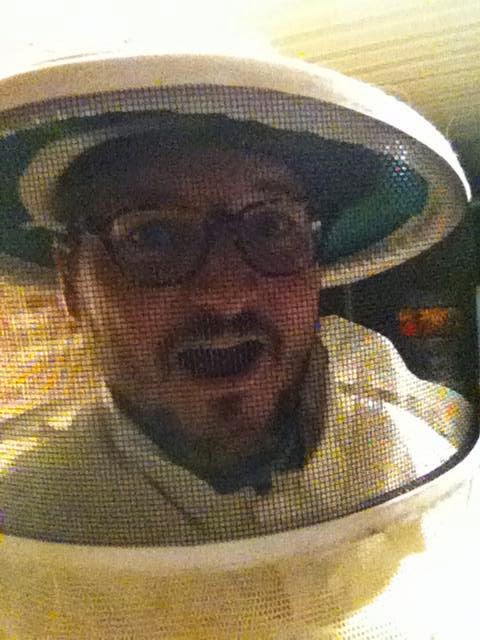 He suited up and was all ready to go.
The two of them looked like this in Jeff's former carport, before going up to the hives. 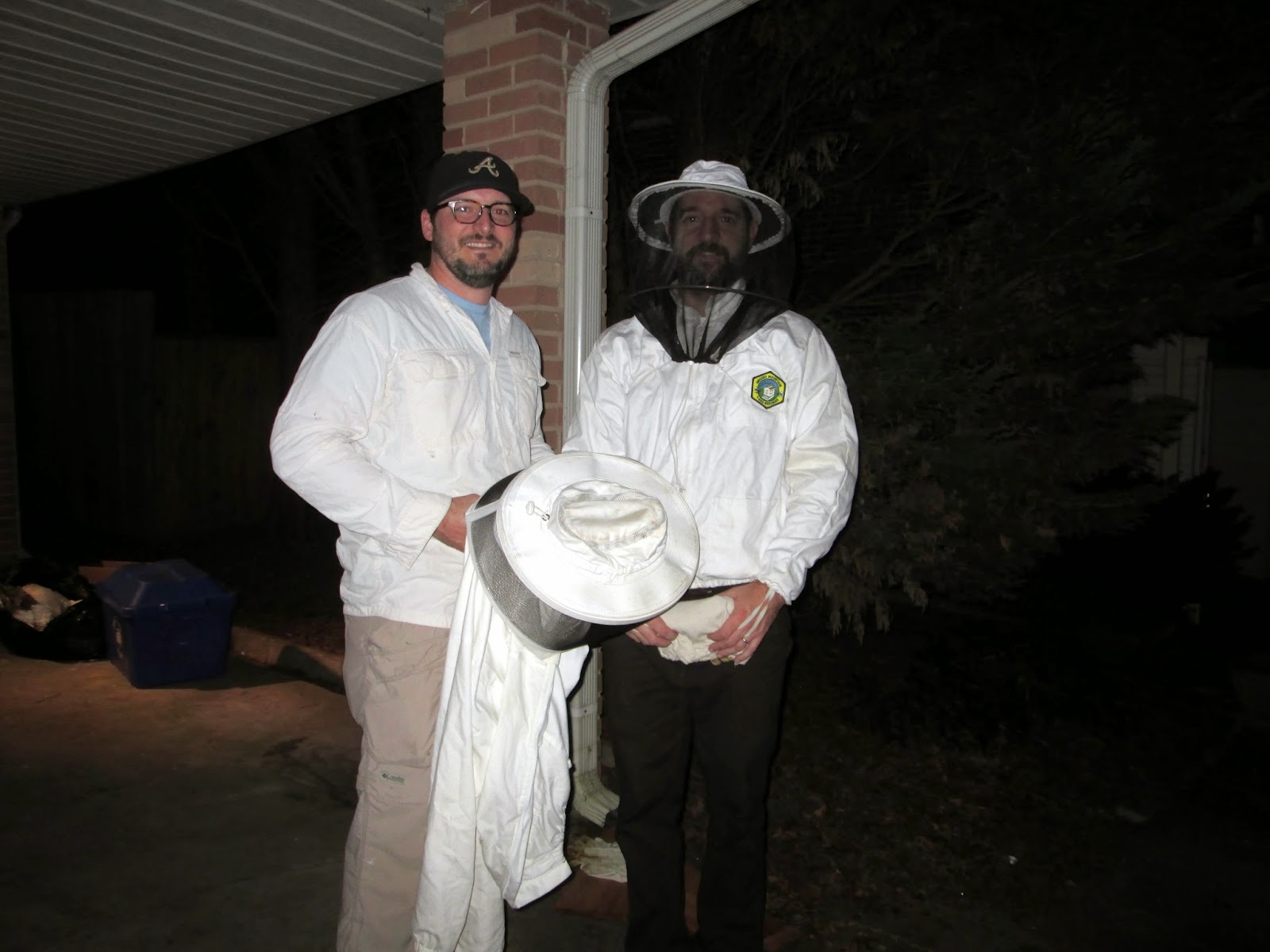 We finished strapping the hives and closing the entrances.  The first hive was very small.  We got the hive from Buster's Bees very late in the nectar flow at the very end of April and they had not done well.  As we stapled the entrance closed, not a single bee poked her head out.  The hive felt very light.  It was only a deep and a medium.  We strapped it with no curious bee showing at the entrance.
We determined that it must be an empty hive and that the bees had absconded.  We still had to move the equipment out of the yard so we put it into Jeff's car.

The second hive was one we installed at the same time, but they had made enough honey for us to harvest a single box.  The bees in this hive were not happy for us to block the entrance.  We found them flying out from under the telescoping cover when we went up to finish the strapping with Gary. 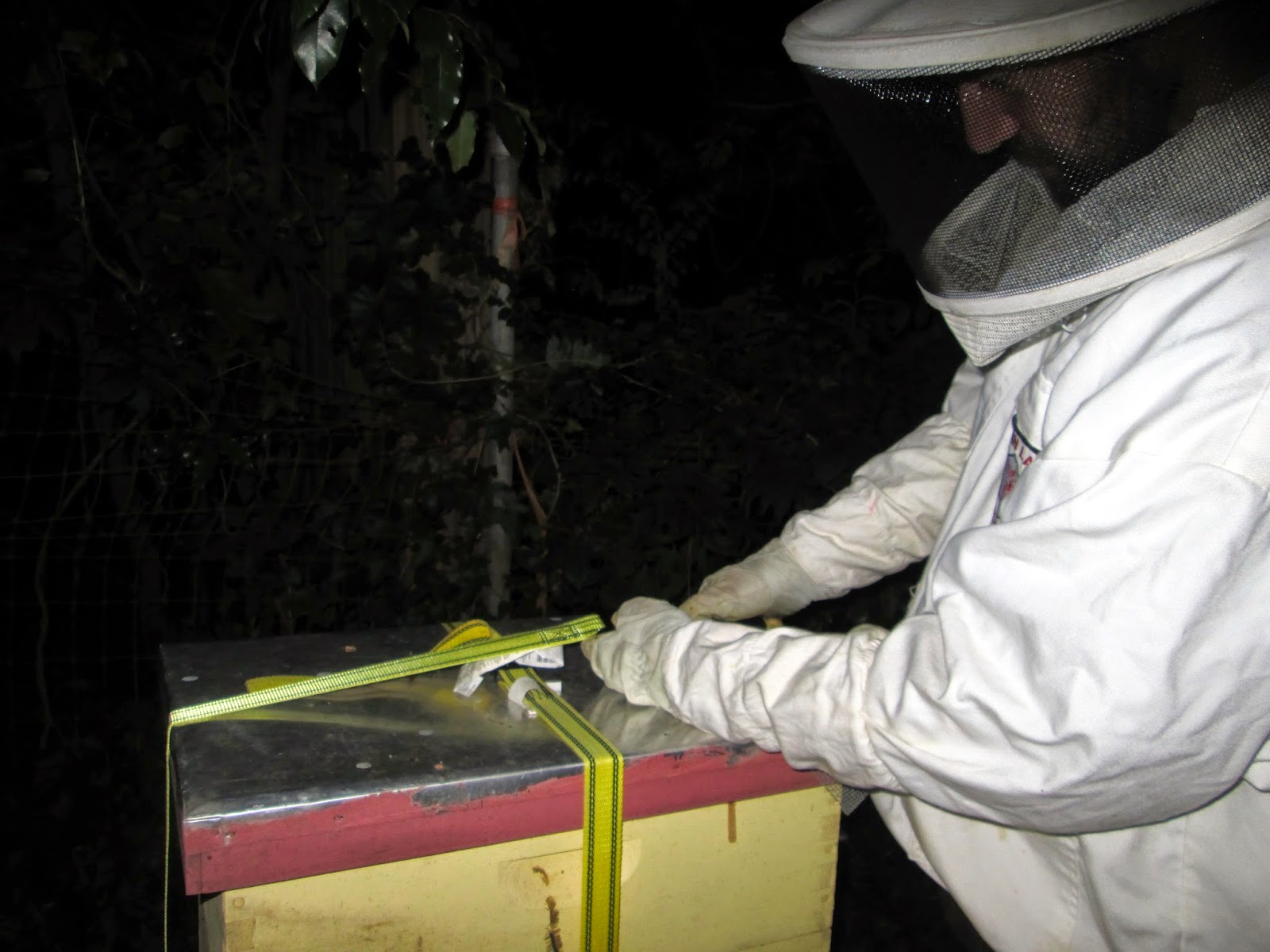 As usual when I keep bees with Jeff, I was the only one stung during the whole operation.  Once I was stung at the front of this second hive and another time when I got a bee in my hair behind this hive and after I finally brushed her out of my hair, she stung me on my ankle. 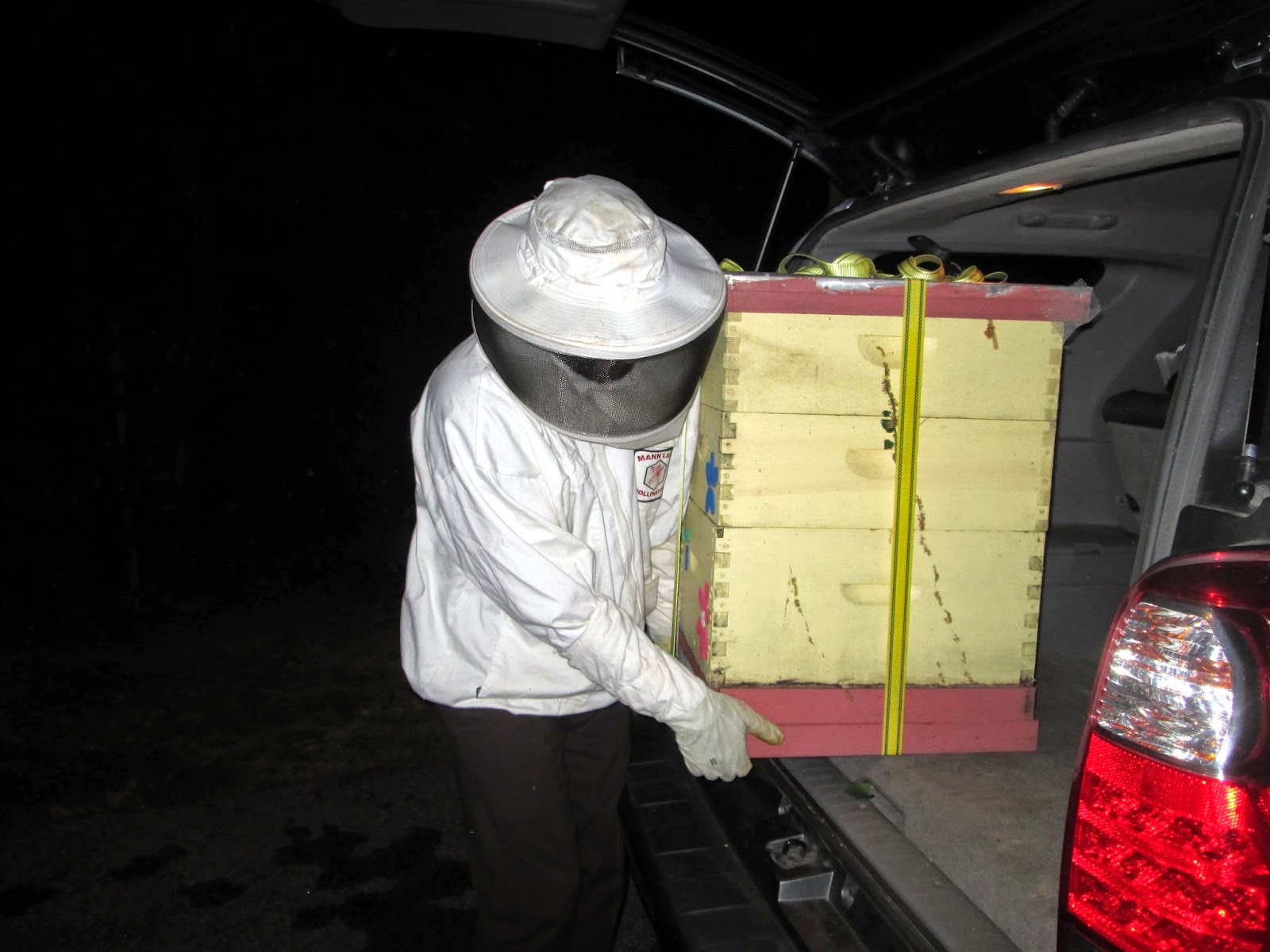 We drove the hive to Tom's house where Ella, his daughter, and his family all participated in our installing the hive. 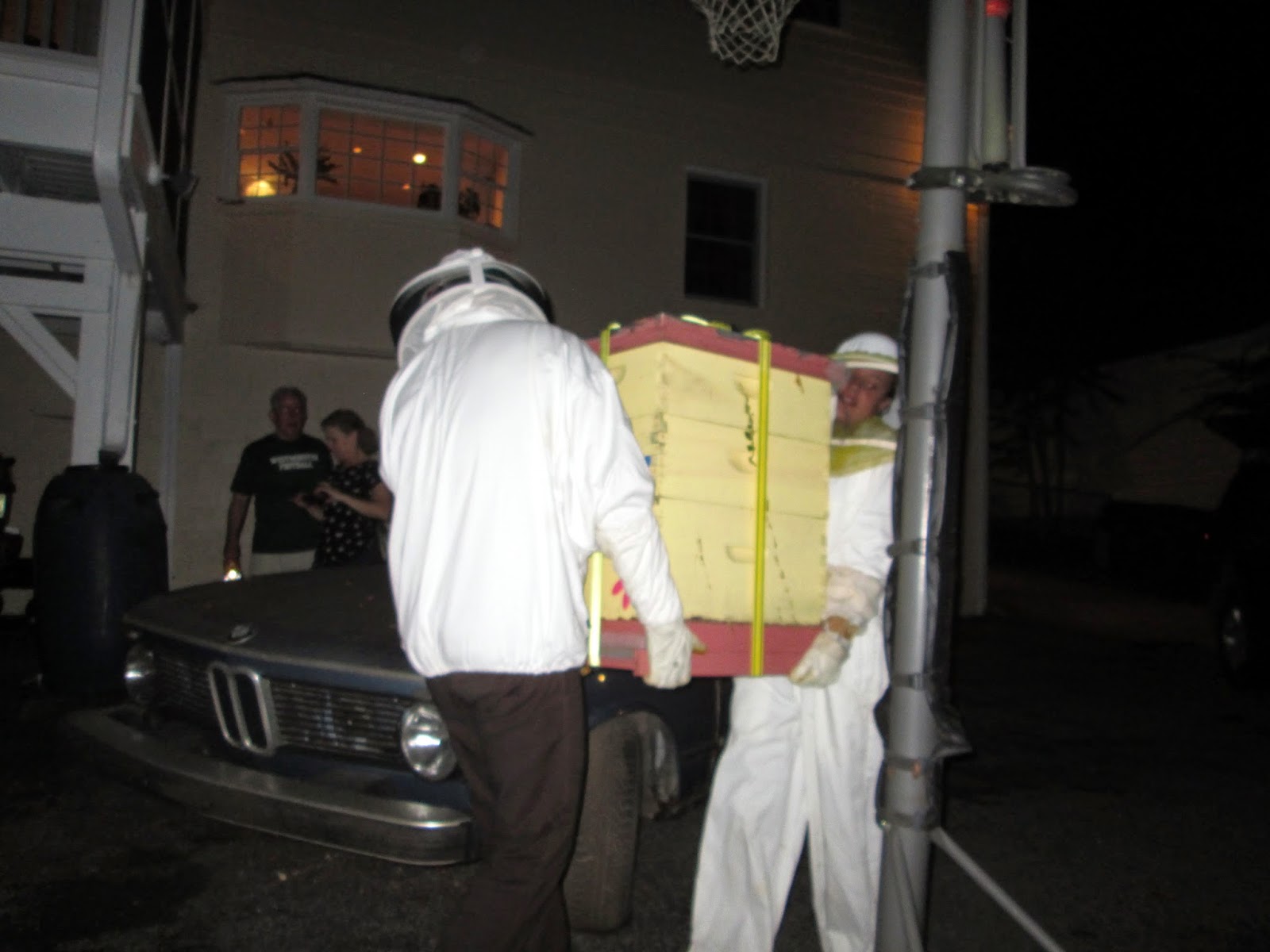 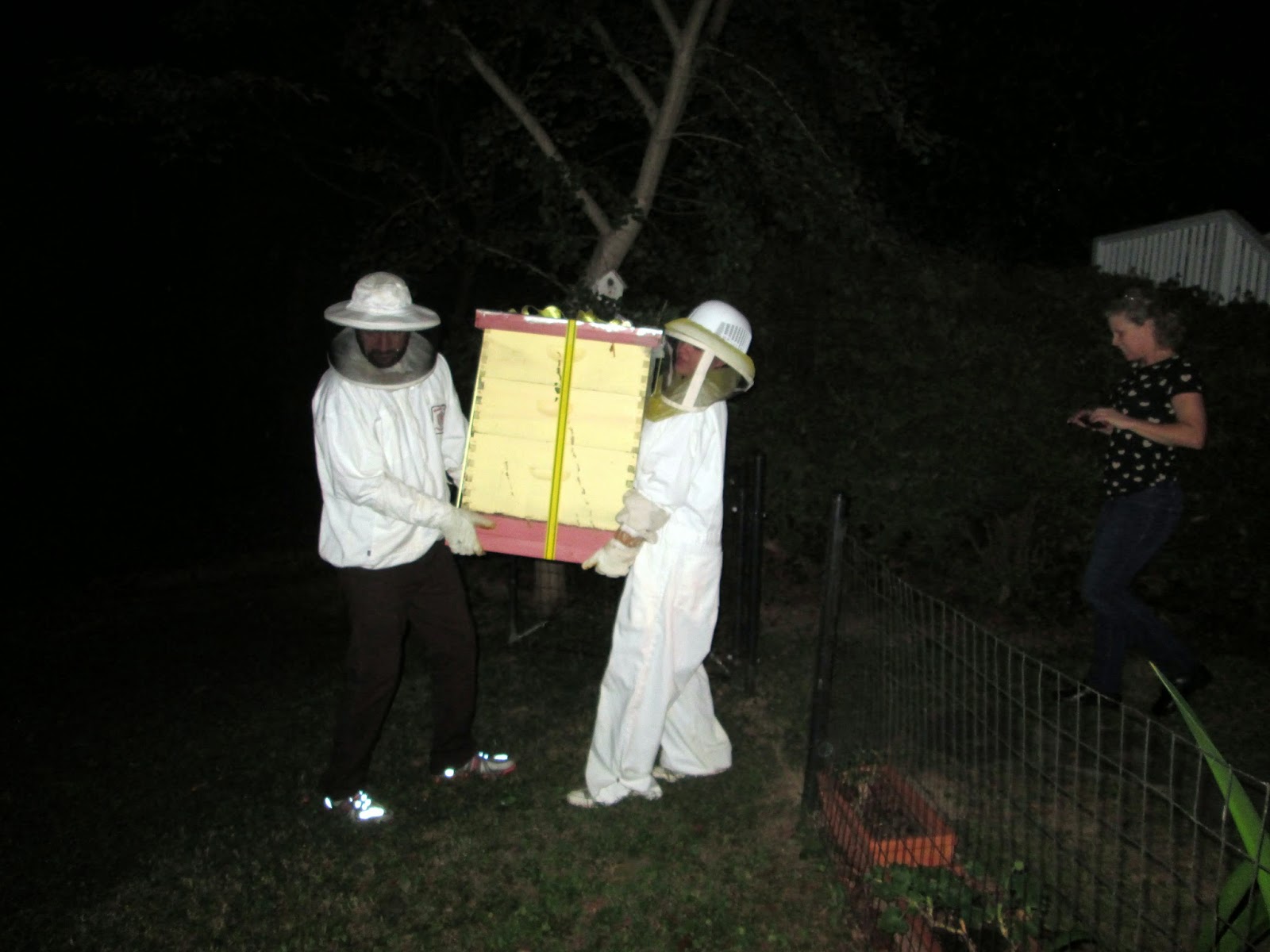 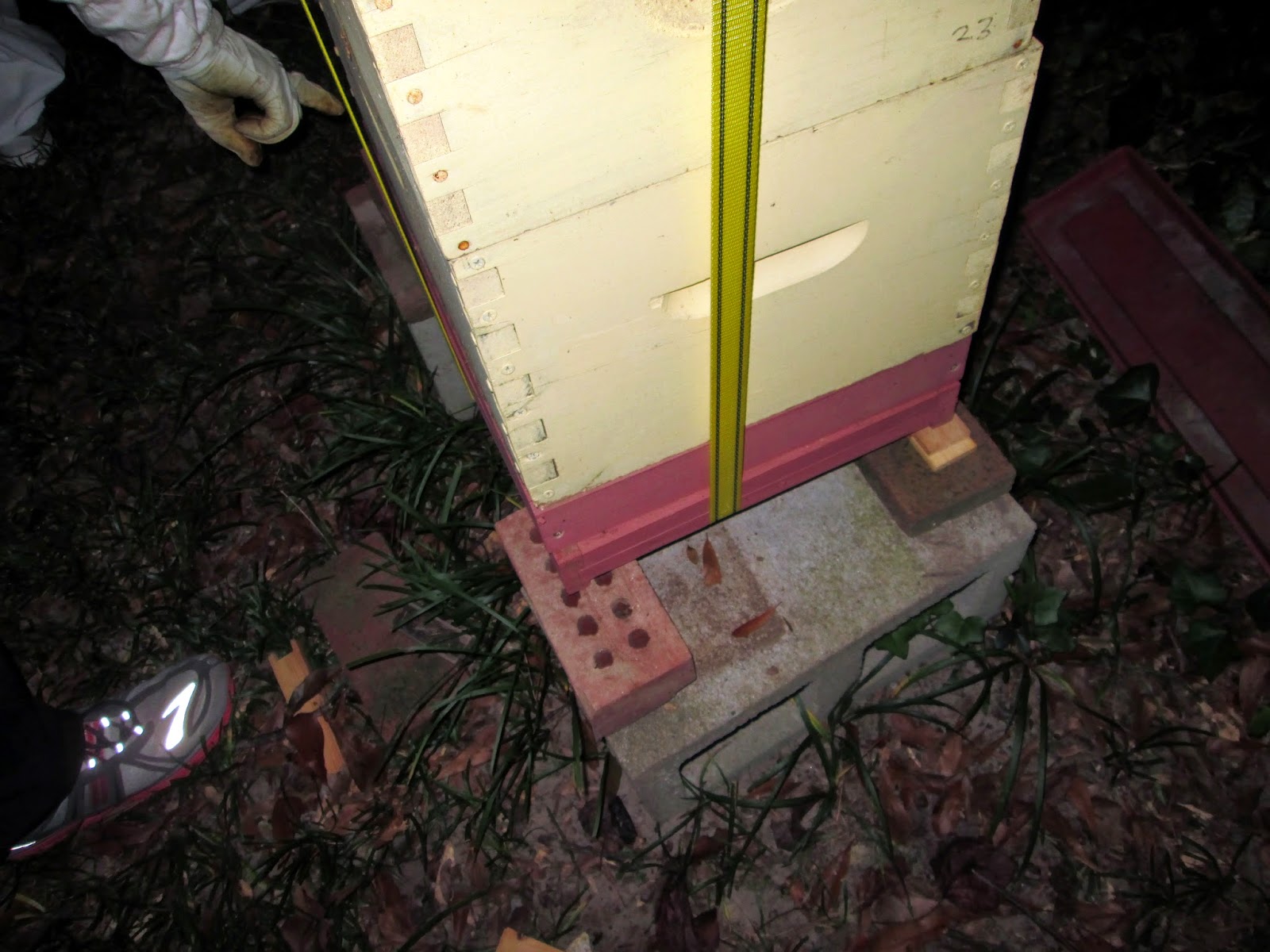 Jeff returned to feed this hive a quart of honey in a rapid feeder the next day.

Then Jeff and I drove to my house to unload the empty hive and extra equipment.  As Jeff opened his tailgate, NOW there were bees at the hive entrance.  We carried the extremely light hive to my backyard and set it on bricks.  We freed the entrance and opened the telescoping cover.  Tons of bees were there.

Since the hive is only a deep and medium and felt very light, we put a feeder on the top of the inner cover, filled it with honey, and closed up the hive.  They have been very happy in my backyard for the last ten days and seem to be adapting.  In spite of being light, they have not emptied the feeder which only held one quart of honey.