I left the swarm all night with my swarm box with a ventilated hive cover on the top.  The cover was open 1/2 inch so that if the bees wanted to come into the box, they could.

I arrived at 7:30 before sunrise, although it was getting light, this morning.  A car was parked in the driveway - which had not been true the night before.  The bees I had scooped were clustered together in the box under the ventilated cover. 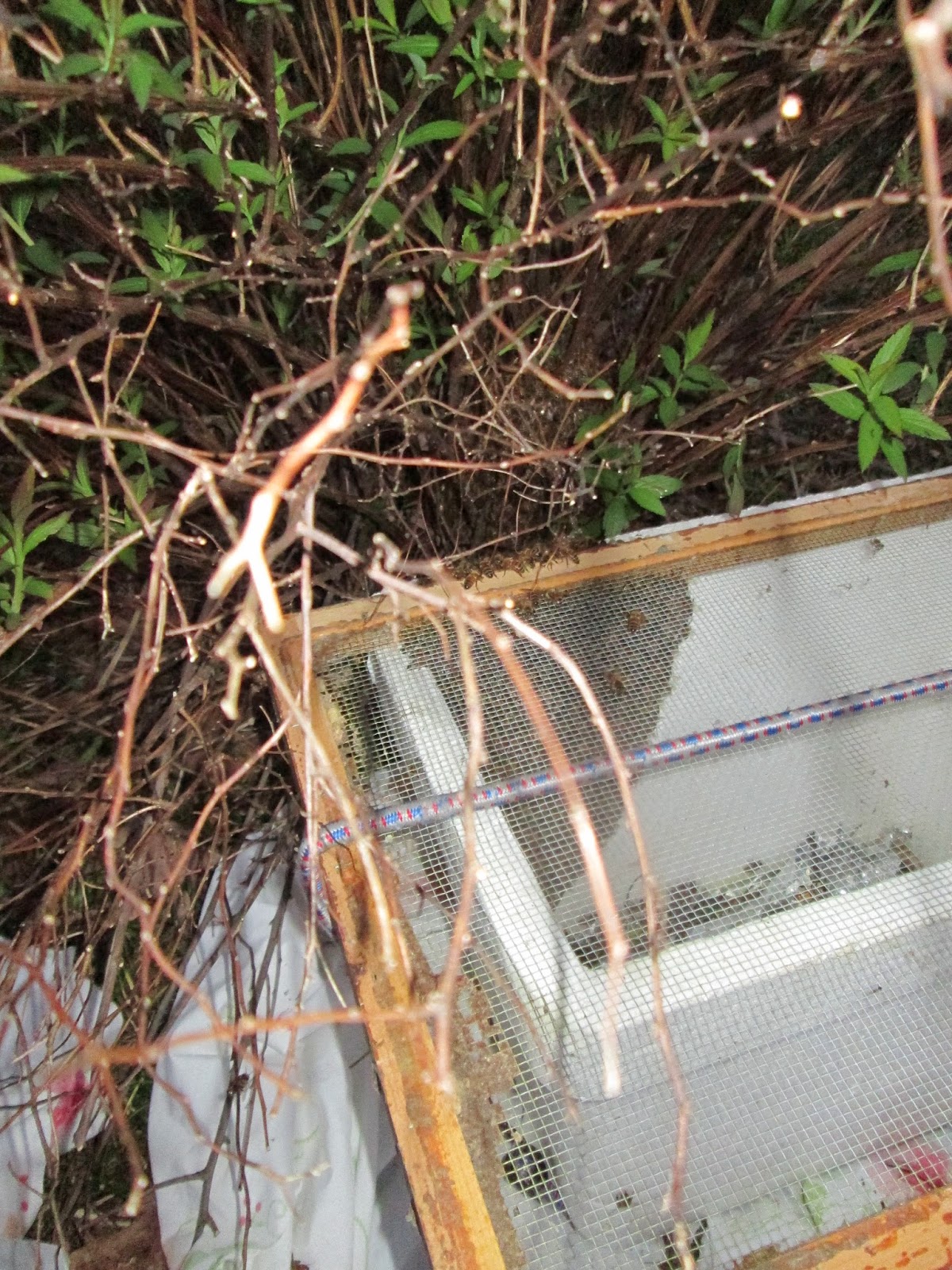 The majority of the swarm was still in the shrub.  This was not the scenario I had imagined, but as the sun came up, the scenario I HAD imagined began to come true.  As the sun came up, the bees in the box got all active.  The bees left the collection box and moved back to her Majesty in the shrub.  They used a branch as a bridge and all of them went across it as I watched. 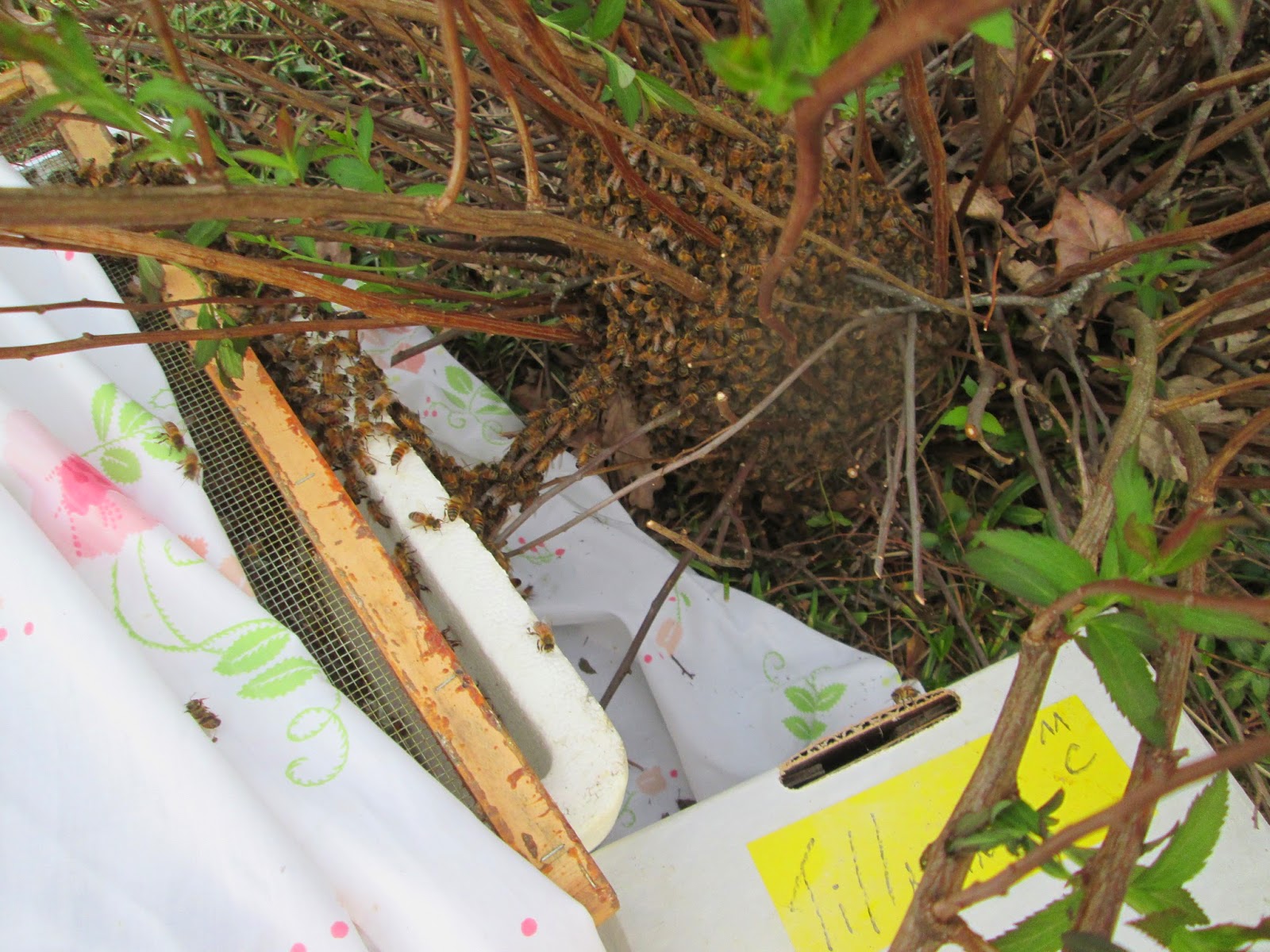 Now I hadn't a clue as to what to do.  I drove home (less than 5 minutes), picked up a cardboard nuc box, loaded it with five medium frames of drawn comb, smeared the entry to the box with lemon grass oil.  I took it back to the swarm location.  I set the nuc box down with the entry near the shrub and left for my 9 AM appointment at my office with little hope for collecting this swarm.  Before I left I wrote a note and put it on windshield of the car in the driveway:

There is a swarm of bees in the shrub at the street end of your driveway.
I am attempting to collect the bees.  All of my equipment and hopefully
the bees will be gone at the end of the day.  Let me know if you have
any questions.

At noon I had a break so I drove back over to the swarm (10 minutes from my office).  There I found an empty collection box and bees all snuggling up to each other in the shrub.  No action at all in the nuc box.

Disgusted with all the time I had spent on this, I threw the collection box into the car and changed the position of the nuc box. 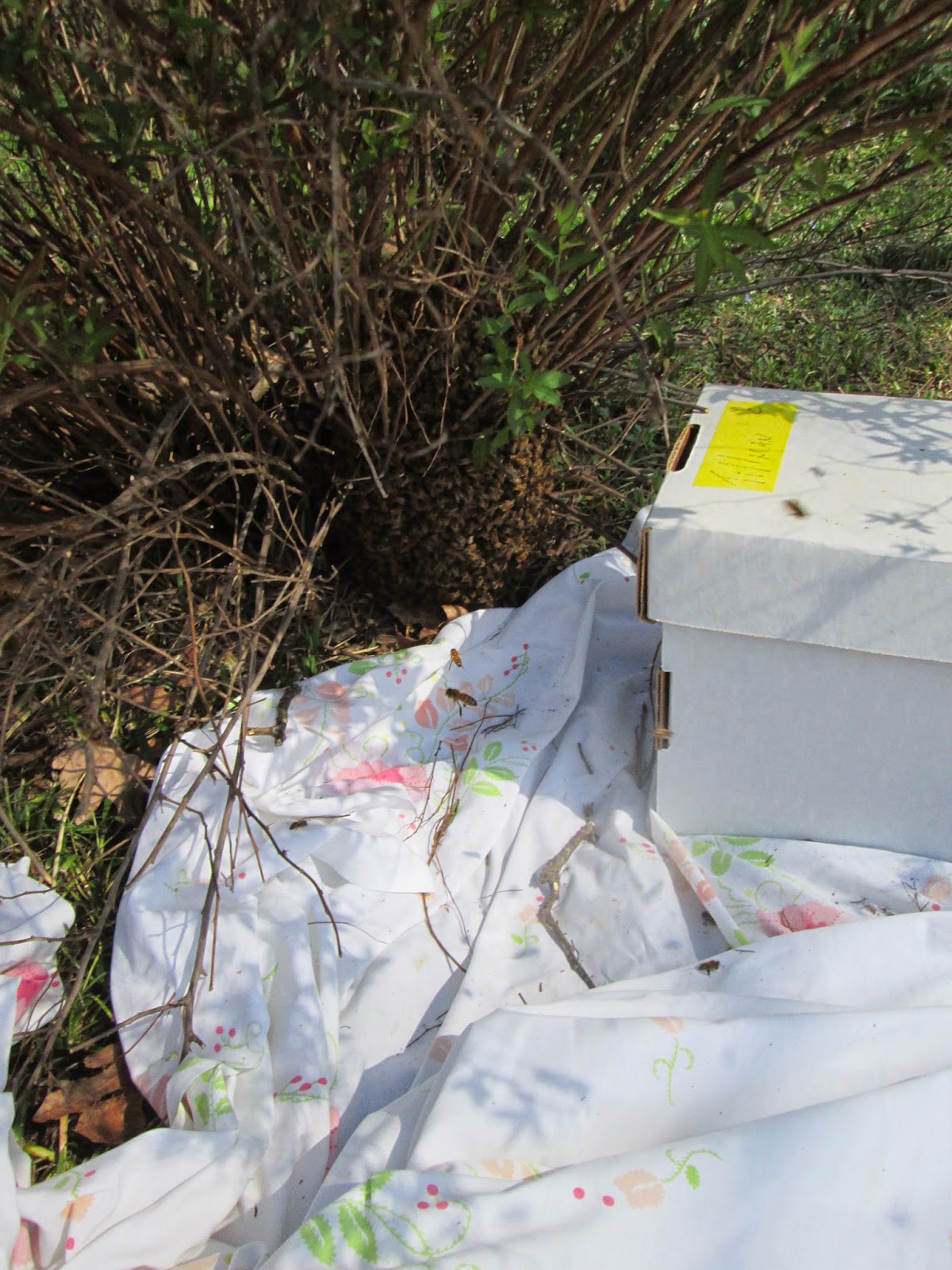 Again I returned to the office.  Around 5 PM I got an email from Anne, who had helped me with her flashlight last night.  She had walked by the swarm and saw the nuc box.  She said there were no bees on the shrub and bees flying in and out of the box!

My grandkids went home at 5:30 so I rode over to see for myself.  There were bees flying in and out of the box.  I decided to wait until dark to remove it. 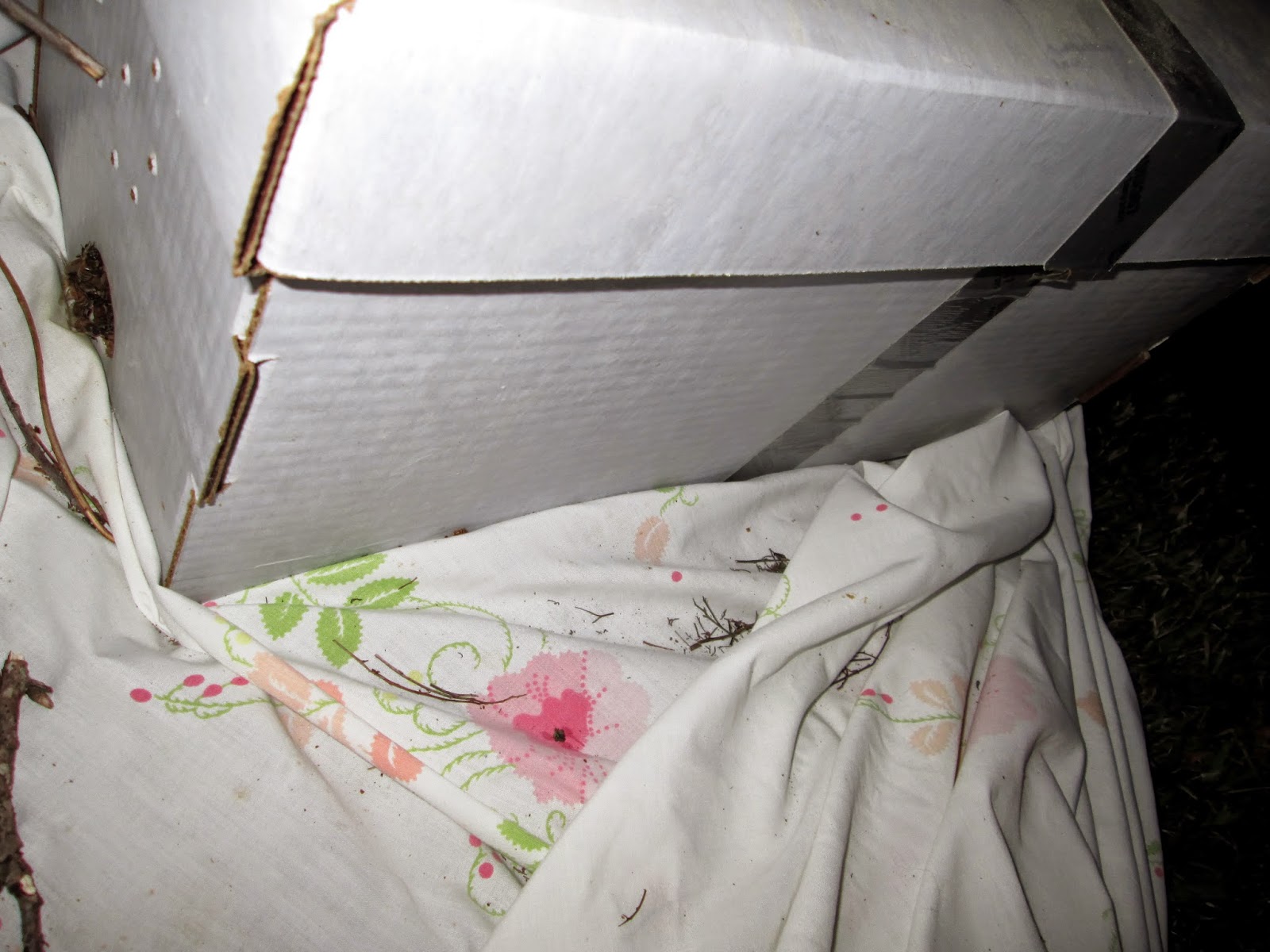 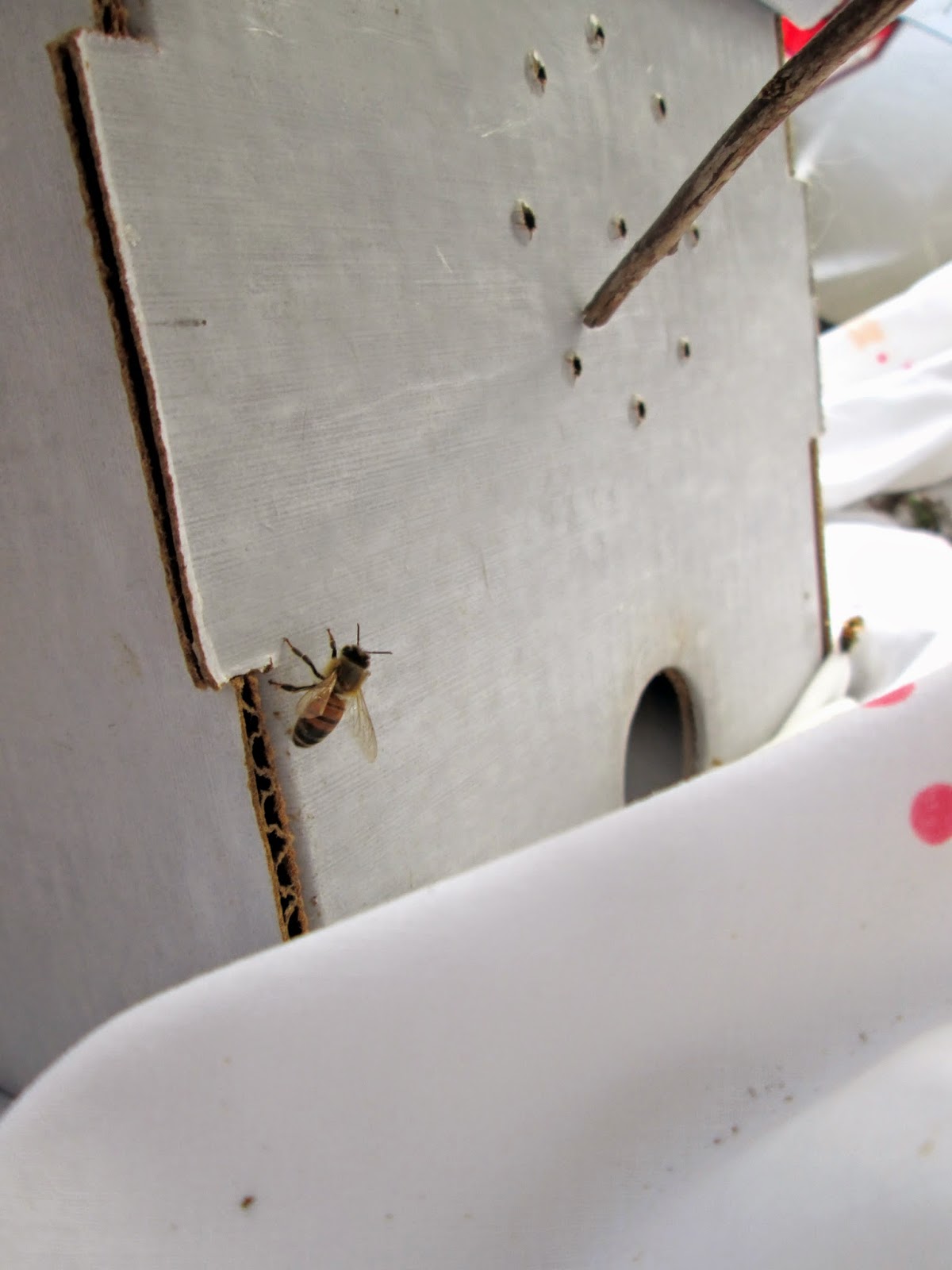 From the second photo, you can see that a ton of bees were not flying in and out.  Maybe there are only a handful in there and the rest flew off to a new home.

Anyway, I brought them home and set the box (which felt really light although I could hear an interior buzz) on an empty hive box until tomorrow when I will install it.  If there is a full hive of bees in it,  I'll let you know.

I should have just set up the nuc box last night - could have saved myself a lot of stings!