New Take on the Solar Wax Melter - Trying Something Different

I've got a lot of wax to melt and have been feeling a little frustrated with the solar wax melter method I am currently using. I hate wasting all of those paper towels and you can only do a little at a time with the Tupperware, the paper towel, the rubberband, etc.

So wandering around Youtube, I found another solar wax melter, fancier than my version below, but based on the same idea. I quickly went past the video and haven't been able to find it again, but thanks to whoever provided this idea.

I went to the grocery store and bought aluminum 8X10 cake pans with about 2 inch sides. I took the handy awl I have in my toolkit - don't ask - it's the influence of my father in my childhood and his ideas of what one should have in a tool box. I may have never used it before. I used it to punch holes in the bottom of one end of the cake pan. 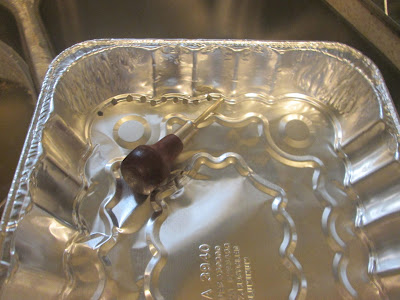 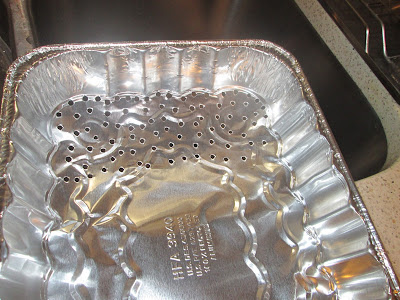 I also bought some plastic rectangular boxes and filled the boxes about one inch or so deep with water. I took my reliable on stand-by styrofoam beer coolers and placed a plastic water-filled box in each of them. The box was too large to go all the way down to the bottom but was large enough that it supported itself against the walls of the styrofoam cooler.

Then I put the aluminum pans at a slant in the cooler above the water filled plastic box. I made sure the end with the awl-punched holes was on the lower end of the slant.

I filled the aluminum pans with dry wax particles. 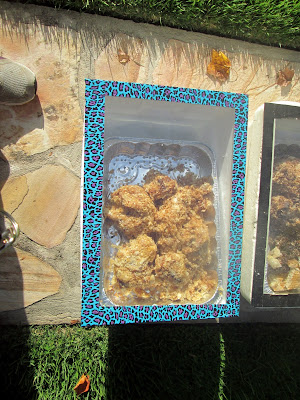 Then I covered the cooler with its pane of glass cover and left them to sit in the sun. Oh, and I lifted the high end up a little with an empty frame as support. 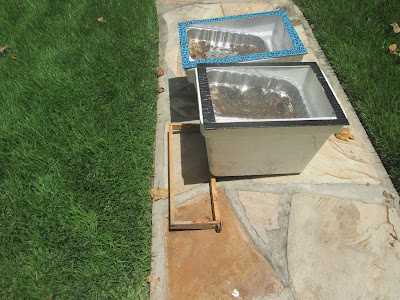 At the end of the day, the wax had melted and gone through the holes to float on the water below; the slum gum was all black and yucky, and I had lost no wax to a paper towel. 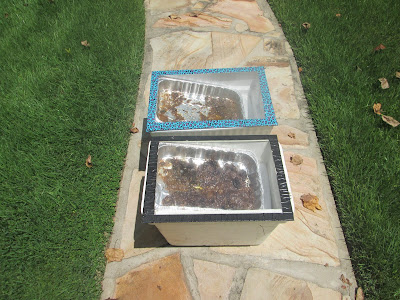 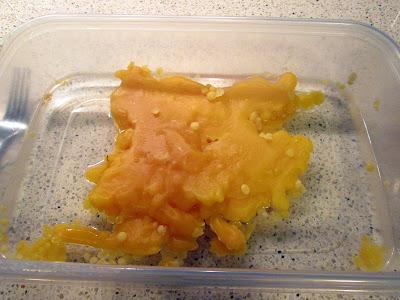 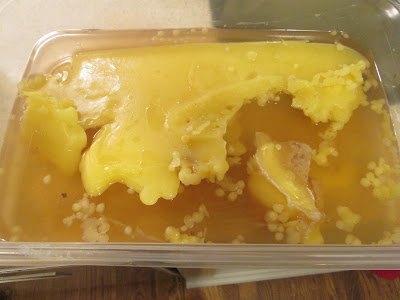 I have been using this for about a week now and have melted a lot of wax. Here's what I have gotten from my efforts so far. 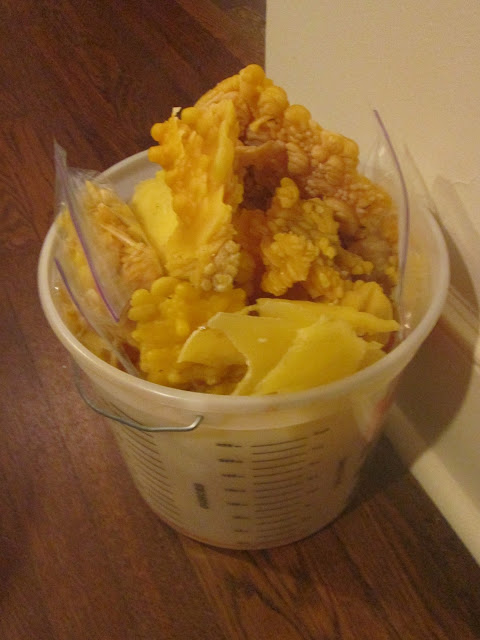 Advantages of this melter:

1. Larger quantities of wax can be processed at a time.
2. No loss of wax to the paper towel filter.
3. The wax is quite clean and shows no need for a filter - all the slum gum stays in the aluminum pan. The water works beautifully as it did in my old melter for providing a surface on which the wax can float.
4. The wax is often in small bits from dripping through the holes - this will be easier to measure for soap and lip balm than having to melt the huge wax block before measuring (that's what's in the small plastic bags in the bucket - small bits of wax)

Disadvantages of this melter:

1. I believe the aluminum pans will have to be replaced after ten or twelve runs
2. At the end of the day, when the sun is no longer beating down, the slum gum hardens to the bottom of the aluminum pan. I've had to put the slum gum pans in the melter for a couple of hours the next day and then wipe them out with paper towels before they are available to use again.
3. The above task requires a pot holder because the pan is so hot and it's nasty to wipe out the slum gum...yuck.
4. Costs from scratch about $15 - $18 to make because the aluminum pans were not cheap...$6 for the styrofoam cooler, $5 for the aluminum pans, cost of glass pane will vary. The other solar wax melter cost about $10 total but melts much less wax and is more bother.