The Thing about Keeping a Blog This Long is that I start to Repeat Myself!

So today and yesterday have been warm December days in Atlanta. At night we've had temperatures in the 30s but in the day, the temperature rises into the high 60s. My neighborhood is crawling with men digging mysterious holes in the area between the sidewalks and the streets. Rumor has it that Google is putting in the wiring for Google Internet - look out Comcast and AT&T. (I, for one, will be running to Google the minute it is available.)

Despite the loud racket of the digging and the numbers of cars and people, at one corner of my neighborhood is a Fatsia Japonica covered with flying insects (this was established in a blog post in 2011 - see how I am repeating myself?) Honey bees are all over the flowers on this shrub which is just starting to bloom.

There are 4000 species of bee in the United States. At least eight of those species were frantically visiting this plant when my dog Hannah and I walked by it today. I am disturbed by all the digging, but the bees appear not to care about Google and their industrious venture in my neighborhood.

I only had my phone so if you want to see good photos, revisit my post from 2011. Only the second photo actually shows a bee, but they were all over the shrub, I promise. Since the shrub is the only blooming plant in the area, it is a very popular place. 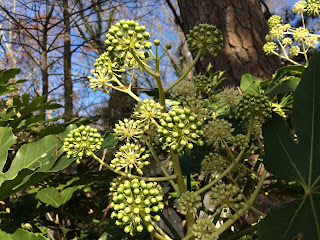 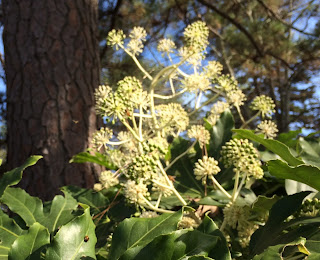