Winter, Summer, It's All the Same in Atlanta

OK, it's not unusual for me not to break out my winter coat until January and our worst winter months are February and early March. As a matter of fact, the two hardest snowstorms we have had the entire thirty-seven years I've lived in Atlanta were in March 1993 and in February 2014. In the March snowstorm the temperatures were in the teens and we had tons of snow (relatively speaking) and no power for over a week. In February 2014, I got home just fine in each of the two snowstorms two weeks apart, but many people were stranded on the Interstates since in Georgia we get layers of ice under the snow on the streets and driving is impossible.

But in all of those years, in November and December, while my winter coat remained in the closet, I would on many mornings put on my fleece jacket or vest. We did have one cold week here in 2015 during early December, but it only warranted a jacket in the early morning. By afternoon the temperature had risen up to the high 60s.

This Christmas week takes the cake. Yesterday the thermometer read 79.5 F - couldn't quite get to 80. I mean, really, it's DECEMBER.

So the bees are confused and this is bad news. Every day they are flying, using up energy and needing to consume their saved stores. There is an illusion among the hives that spring may already be springing - is the queen laying at her pre-spring rate? Or is she slowly increasing as of December 21 which is her usual procedure?

Right after the actual cold winter week, I saw evidence on one hive that they may have nosema. 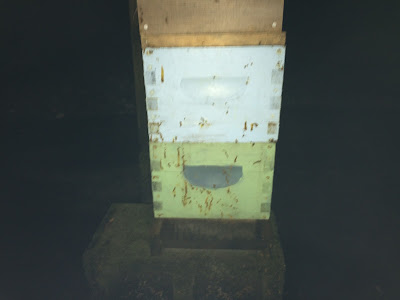 But that was several weeks ago and the bees in that nuc hive continue to fly as eagerly as the others.

I worry because I didn't feed my bees this year - I rarely do. Instead I harvested relatively little, leaving lots on each hive for the bees. The nuc in the photo and a sister nuc are from splits I made in late July after the nectar flow had long ceased. I gave each of those hives two jars of honey, harvested from another hive.

So in giving them that honey did I transfer nosema from the other hive to them?

I don't know, but we can only hope for the best.  I won't feed them anymore and cross my fingers that they make it through the winter. The two nuc overwintering hives are splits from my strongest survivor hive so hopefully they will have traits to endure their way through nosema or whatever else the varroa mite dishes out over the "winter," such as it is!
Email ThisBlogThis!Share to TwitterShare to FacebookShare to Pinterest
at 3:28 PM
Labels: making splits, nuc, overwintering in a nuc, survivor hives