The Value of a Beekeeping Mentor

When I first started beekeeping, I had many mentors. An Atlanta beekeeper came over pretty close to the arrival of my first hives and walked me through my first inspection. I went on hive inspections through my local bee club at the Atlanta Botanical Garden where there were beehives. Most of my local bee club believed in feeding the bees all the time and treating the bees for everything, so I couldn't find many/any like-minded beekeepers there. I relied for mentorship on people at Beemaster and Beesource online and felt wonderfully mentored.

Now that I've been keeping bees for eleven years, I have the opportunity to give back and I do a lot of mentoring new beekeepers. Beekeeper-wanna-bees, as well as new beekeepers, show up to spend time with me in my bee yard and I am glad both for the company and for the chance to teach someone something new.

I was contacted by a man in north Atlanta when he first got his bees. He came to our Meetup in Atlanta and had met me and wanted some hands-on help with his new hives. He lives about 25 minutes from me (Atlanta is really big!) but I went and was glad to go.

He had read a lot online and really wanted to be a natural beekeeper. He had regularly read Beesource and Beemaster and knew a lot, but was uncertain about his hives. The first time I visited, it was about reassuring him about his hives and helping him to know how to conduct a hive inspection.

He has a beautiful organic garden. 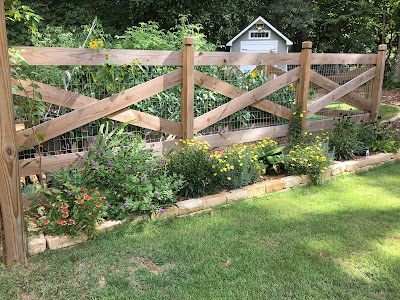 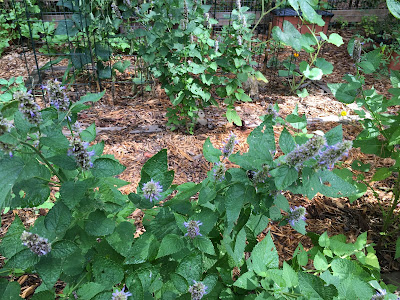 He requested a second visit because he was worried that he had a queenless hive. The closest hive in the photo below looked less active and he had opened it and hadn't seen any brood, any sign of a queen. 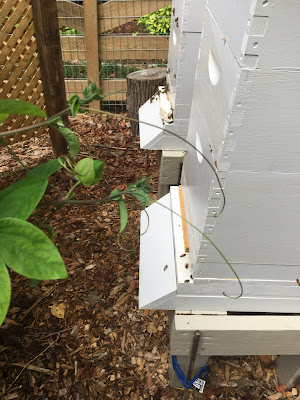 You can see less activity in the closest hive in the photo above. So we opened the hives and went through them. We started in the less active hive. We took off the medium boxes and got to his deep bottom box. I pulled out the next to last frame and there was dark biscuit brood in the center in a pretty good pattern. According to Billy Davis, that means the brood was about to emerge so it was about three weeks old. Also in that frame I could see brood and larvae at all ages and eggs. I showed him how to put the sun over your shoulder the better to see the larvae and eggs.

Every time I go, he comments on how patient I am. I am so not a patient person, but that was nice for me to hear because I think one of the benefits of beekeeping for me is that it slows me down and makes me behave patiently.

Turns out that he was panicked when he had read on Beesource that many people were finding that they had lost their queens here at the end of bee season. He had not looked through the entire brood box (must have started on the other side of the box) and assumed he didn't have a queen.

However, the hive was actually thriving and had a healthy, laying queen. The other hive was in equally good shape with a little more stores than the first hive. I asked him if he would like to take a frame of honey out of the hive so they could at least taste what his bees could do? He loved the idea so we took out a frame (giving me the opportunity to show him how to shake and brush off the bees).

I told him how to scrape it off of the foundation and crush it. He emailed me later in the day to say, "Oh boy, it is awesome!"

It's great to ask for help and guidance at any point, but especially when you are starting out beekeeping. I think the next time he is worried, he will look more carefully through the hive and maybe take reading glasses or a magnifying lens to help him see the eggs and larvae.

As I backed down his driveway, I could hear him literally giving a whoop of joy that his hives were OK.