It's Swarm Trap Time - Time for Traps and Swarm Lure

We are having a much warmer time earlier this year than normal and bees are considering swarming. I want to be ready so last weekend I set up three swarm traps.

My nuc which was a thriving hive, died in early winter because I didn't feed it. I had started feeding it but then I fell in October and didn't do anything for the hives after that. This huge nuc died and it made me ill to see all the dead bees. And to see the two empty bottles of food inside the top nuc box. 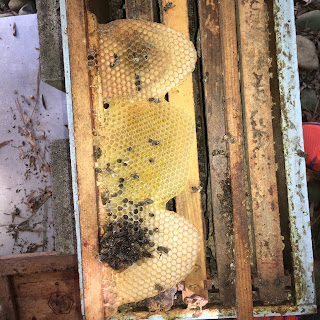 The last little bit of honey was consumed by the bees. They are head down in the cells as bees are when they starve. The rest of the bees lay dead in the bottom of the nuc box. 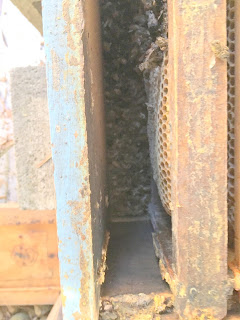 I was a neglectful beekeeper - injury is a decent excuse, but I could have gotten someone else to feed them.

So I took that nuc box, smelling of bee (which is often seductive to a swarm looking for a home), cleaned it out (dumped out the dead bees) and set the nuc up as a swarm trap.

At our GBA spring meeting on the 18th, I heard a really good talk by GBA member Paul Berry about the tons of swarms he caught last year (I think the number was 48!). He prefers nuc boxes as swarm traps. Since this is a medium nuc box, I put two boxes on the bottom board to intrigue the scout bees. 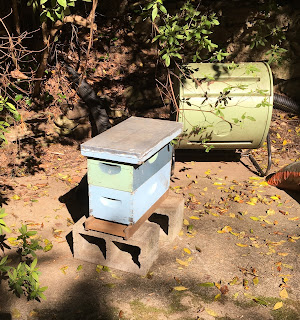 My house is built into a hill and my backyard is considerably lower than the street. So I arranged two other nuc boxes as swarm traps on my deck to attract either my own bees swarming or some from the many neighborhood beekeepers. 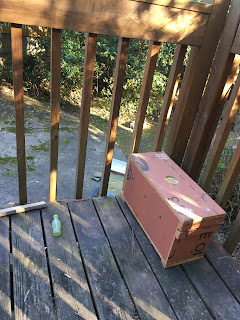 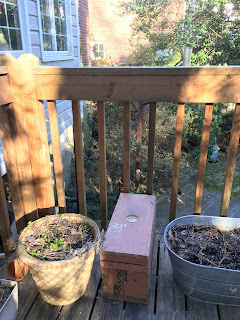 As you can see, I have jammed the entry of the nuc box up against the slats of the deck rails. I'm feeling a bit like Winnie the Pooh and am hoping that the bees will think these boxes are in a tree.

I did several things to make these swarm traps attractive. I put frames in the hive that were old frames and smelled nice and bee-ie. In the deep nuc boxes I put medium frames because I use all medium boxes. If I catch a swarm I wanted to move it to a medium box as easily as possible and the medium frames will facilitate that.

Finally I mixed up swarm lure. I don't think it's easy to find the recipe on my blog anymore since Google disabled Picasa web albums so I took photos the other day as I made more and here they are: 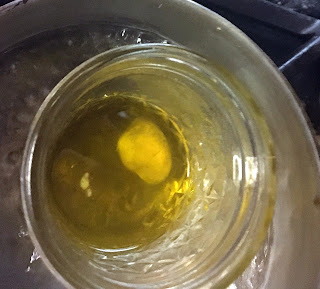 One square inch of beeswax in 1/4 cup olive oil, poured into a jelly jar and heated in a hot water bath on the stove. 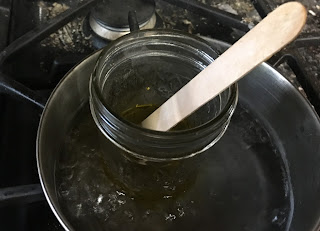 Melting happens faster if you stir - I use a tongue depressor. 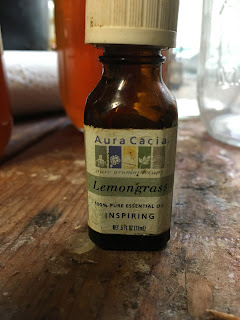 When it has cooled slightly, add 15 - 20 drops of lemongrass essential oil (the bees love it and the olive oil/beeswax mix makes it last longer in the hive). 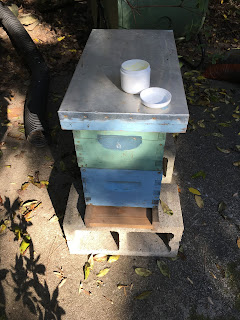 Pour it into some kind of container. It will solidify into a sort of lotion/ointment. Take it to the swarm traps and smear it. I smeared lure under the top edge of the entry and on the tops of the frames in the box. I also smeared some swarm lure around the hole in the inner cover.

Now I get to watch for a swarm to arrive!