Last bee season I killed my best colony. I didn't write about it because I was so, so ashamed of killing such a great colony of survivor bees. I had had them for about six years. I was trying to follow the plan of splitting your colony after the harvest to go into winter with extra colonies in case you lost any over the winter. I needed help to do it (I couldn't lift hive boxes last year because of a shoulder injury) so I waited about two weeks too long.

By the time I split the colony, making three three frame nucs in my queen castle, we were in a dearth. All three splits were robbed out and killed. I must have moved the queen to one of the splits by accident because the original colony was unable to make a new queen. So the three splits and the strong original colony all died.

That meant that going into winter, I only had one colony - a four-year-old hive that developed from a swarm I caught in my own neighborhood.

My friend Julia told me that a man from Wisconsin who had Buckfast bees was driving through Atlanta from Florida and still had some nucs available for purchase. The company was Fox Honey Farm and they were driving a flatbed truck through Atlanta with bee pick up between 5AM and 7AM on Saturday, March 17 in a Walmart parking lot on Cascade Road. What an adventure!

I ordered two - one for my bee-lonely backyard and one for a yard where Jeff and I are to be the beekeepers this season. And then I set my alarm for before the crack of dawn and drove very carefully to the Walmart parking lot. It's amazing how many people are shopping at Walmart before 6 AM!

Later that morning a high school student whom I am mentoring and I installed the two nucs. First we opened the entry and set the nuc that was staying at my house on top of the hive where it would live. Then we drove over to the house near Emory. 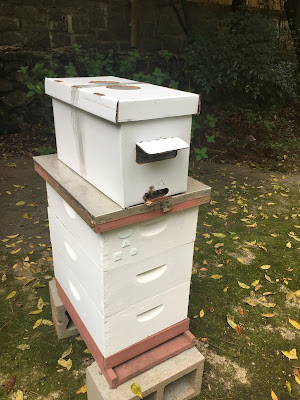 Aaron who was working with me had opened a hive with me before but he had never done a nuc installation. So he handled a lot of the hive installation at the house near Emory. 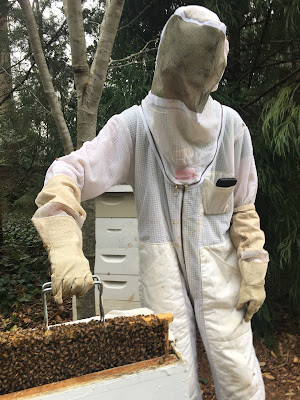 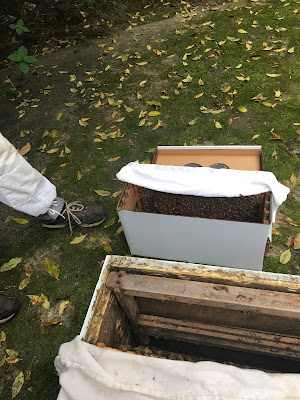 As I'm sure you know, you don't need a smoker during an installation, but we do use hive drapes to keep the bees as calm as possible. This was a very calm nuc and the installation went well. When we finished, the bees were starting to explore their new environs. 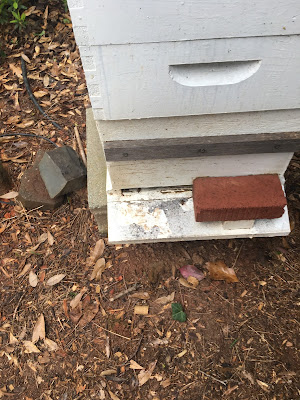 This old hive is right next to the hive in which we installed the nuc. It is unoccupied and the beekeeper who owned the hive has, as I understand it, left the country. It had three different sized boxes on it. I saw bees flying in and out of it - scouts looking for a new home, I'm sure. While we were there, we moved the shallow boxes off of this hive so if a swarm should decide to make it their home, we wouldn't have to deal with three different types of boxes.

Then we returned to my yard and installed the Buckfast nuc there. 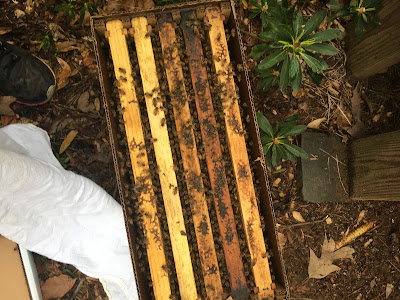 In both nucs there were five frames of brood, a tiny bit of nectar and no pollen that I saw. I put a full frame of honey from my freezer into each of these installations to give the bees something to live on until the nectar flow starts in a few days or so. 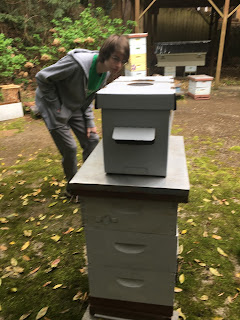 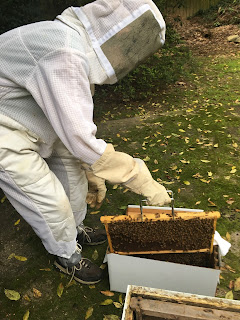 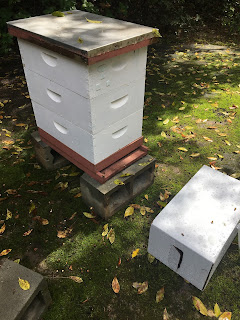 And then, following SOP, we left the nuc on its side facing the hive so that the remaining bees could join their mom and sisters.

I went back to the Emory installation the next week and it was doing great.

I saw the queen: 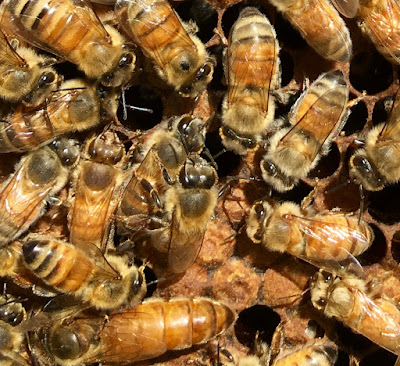 And I noted that the bees were drawing comb as fast as they could on the empty frames in the box with the frame of honey. 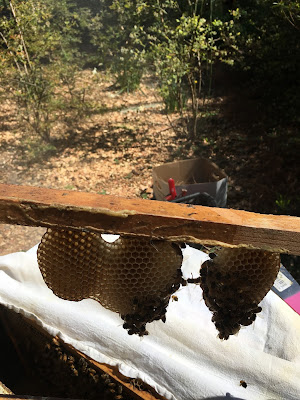 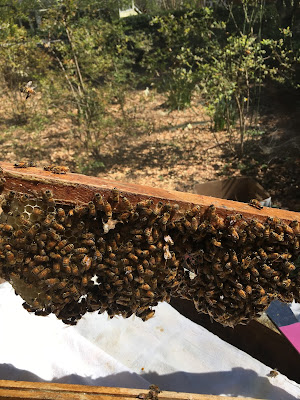 Live long and prosper, Buckfast Bees. I'm counting on you.