My friend Andy Marcus is an air conditioning guy in spring and summer, but during the calmer days of winter, he builds top bar hives. Julia ordered one from him and I saw it and loved it. I called Andy, who told me he had just enough time to do one more top bar hive this winter.

When he finished it, Jeff and I went up to get it. Andy lives near Dahlonega, GA. We took Jeff's car, which is bigger than mine, because the hive is HUGE. It was a cold, misty, rainy kind of day in early February.

We were blown away by the gorgeous top bar hive that waited for us at Andy's house. Here it is with Andy, the builder: 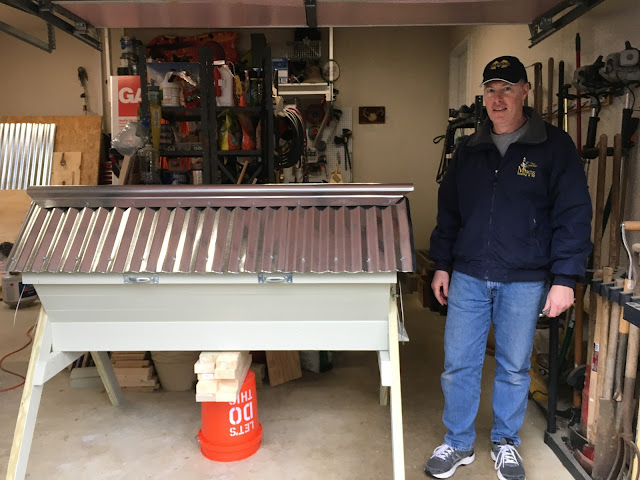 To put this in the car, we had to remove the legs! Both of my sons-in-law carried it out of the car into my yard where it sat on a stack of hive boxes, waiting for me to paint the legs.

Last weekend, Jeff worked to attach the now-painted legs. Literally as he tightened the last bolt, my phone rang with a swarm call to pick up a swarm not too far away on an arbor - it was such an exciting swarm collection that I will do a separate post on it.

So here it sat in my backyard waiting for the swarm to arrive! 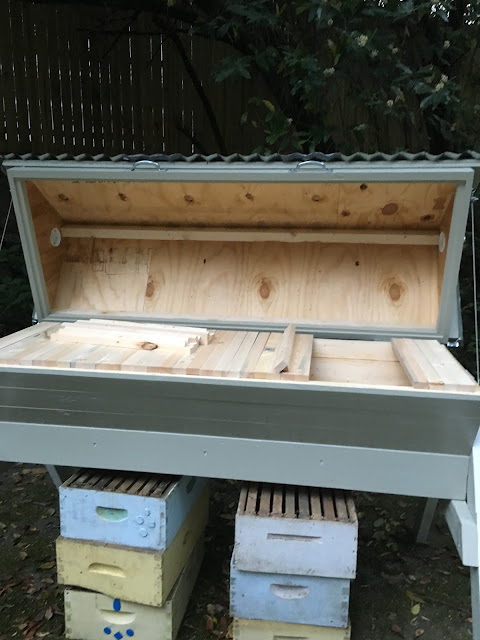 The hive boxes are under it because the top bar rested on the boxes while we worked on getting the legs attached.

I could sleep in this box - it's as big as a coffin!