MapMyDCA.com and my friend Julia

My friend and beekeeping buddy, Julia Mahood, is a multi-talented woman. Among other things, she designed the license plate now sported by lots of Georgia cars; she was beekeeper of the year for GBA in 2018; and she is a Master Beekeeper. She, her son Noah, and I went together to Lithuania on a beekeeping tour back in 2013.

Always up for becoming an even better beekeeper, she is working on her Master Craftsman level of certification. The focus of her research for this is the drone bee. She has developed a citizen science website for mapping where the drone congregation areas are throughout the world. If you know where one is or are just interested in drones and their behavior, you'd enjoy her website.

So imagine my delight when wallowing in the middle of the depression of social isolation and never seeing anyone I care about in person, Julia suggested that I meet her in a field where she is catching and marking drones. It would be easy to do that and stay six feet apart!

I believe the way it works is she is interested in how often drones who don't "get lucky" return to the same DCA. She catches drones, marks them in a color representing this DCA, releases them and returns another day to see how many of her painted drones she catches a second time.

On this day, she was using a helium weather balloon for catching the drones. 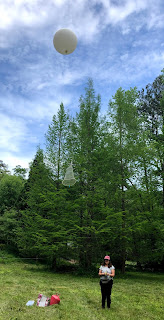 The helium weather balloon is about a yard in diameter if not a little larger and flies high above the trees. If you look at the photo of Julia holding the balloon down at a lower height, you can see the trap hanging about ten feet below the balloon. The trap has a velcro part at the top where the drones can't escape.

Julia told me that drones only have enough fuel to fly for thirty minutes before they need to be back in the hive for more honey (fuel). So she flies her balloon for about five minutes at a time and takes three minutes or so to mark the drones before releasing them and sending them on their way.

In the photo below, if you look closely, you can see lots of little black dots, all of which are the comet of drones trailing the trap. The trap is baited with queen lure hanging in it (which entices the drones). I am sure the little black dots are all drones - Atlanta air in the pandemic is remarkably clean because there are no cars on the road since everyone is staying home! 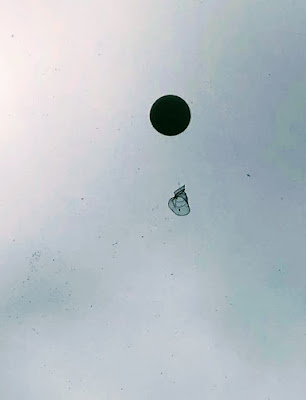 Once back on the ground, Julia takes the drones out of the trap one at a time; marks their backs with a permanent red marker and releases them. At another nearby DCA, she uses a yellow marker. So if she sees her red-marked drones in the yellow district, she knows that the red-painted drone frequents more than one DCA. 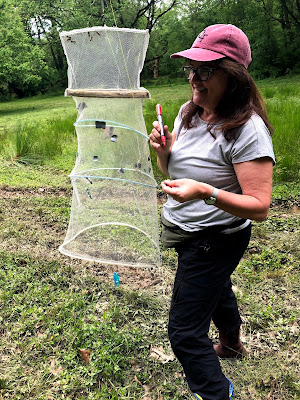 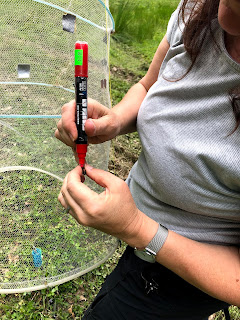 It was interesting to look closely at the netting of the trap - it's a wide netting and very soft, unlike what I have seen in fabric stores. 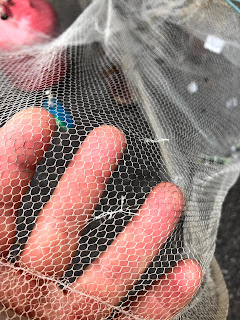 At the end of the whole process (Julia has found that she catches the most drones in the 4PM - 5PM time slot), she puts the balloon in her car and drives home very carefully because the balloon is so BIG that the hatchback will not fully close! 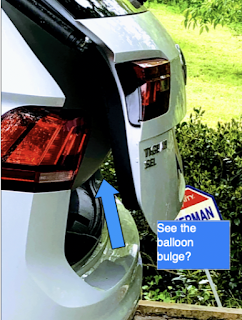 Julia's project has made me much more interested in the drones in my hive and more curious about their behavior in general.