No Weed-Whackers, No Wind, but an Emergency???

During the coronavirus consciousness about social distancing and not gathering in groups, we are not having in-person hive inspections for MABA, my local bee club. I'm the chair of the hive inspection committee and have felt a great responsibility to figure out a way for the newer beekeepers in the club to have the opportunity to see inside a hive. 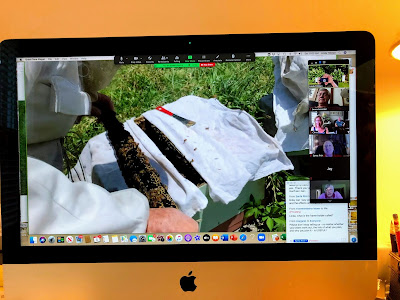 My solution, albeit not at all professional, has been to video my hive inspections with my iPhone. I dutifully bought a light tripod from Amazon which is easily added to my kit that I carry to the hive. I put the phone in the mount on the tripod, push the "video" button, step in front of the camera and start my hive inspection.

I've run into numerous issues. I always seem to go to the hive when someone in the area is weed-whacking - either in the yard next door or Georgia Power has sent their yard guys to weed-whack the community garden. The wind up on the hill is always blowing like it's March every single time, making loud whooshing sounds as it goes over the mic on the phone. And sometimes someone, urging commands, walks their dog right past my hives.

And then there's my iPhone itself. It has a mind of its own.

I'll go through a whole hive and then find that right in the middle of my inspection, the phone simply turns itself off. Once it was because my memory was full, but I've deleted everything so that doesn't happen but even now, it just turns itself off with no obvious cause. Bees often fly into the phone screen while I am filming, but that shouldn't turn off the video unless they perfectly head bump the round circle with the little red square in it. I would think that would knock them unconscious and maybe I am missing their tiny bodies, lying unmoving on the ground at the base of the tripod.

I prefer to blame it on the iPhone having a mind of its own.

So this Thursday, it's a miracle - no wind, no weed-whackers! I set up the iPhone in the tripod and like Santa Claus, checked it twice, and it appeared to be running in video mode. Blissfully chatting about what I am seeing in the hive, suddenly I hear a voice from the phone: "What's the emergency?"

I ran to the tripod to find that the iPhone had called 911 and the operator was patiently waiting for me to describe whatever tragedy I was enduring. "I'm sorry, M'am," I said. "I'm a beekeeper filming a hive I am inspecting with my iPhone. I guess the phone called you by mistake. I'm fine. Please don't send anyone!"

Thankfully, she believed me and the fire truck, the ambulance and the police did not appear at the community garden!

PS: If you push one of the volume buttons and the button on the opposite side of the iPhone at the same time, your phone will call 911. #nowIknow  That's what was happening as the tripod gripped the iPhone horizontally.