Riding in my father's car when I was young was like inhabiting a library of information. An unabridged dictionary was always in the car to settle any word identification discussions. He was a bird watcher, so there were stacks of field guides with Peterson's Field Guide to the Birds on the top of the pile. He was also interested in mushrooms, so there were books about mushrooms. My mother loved and could identify any wildflower or tree, so for her the car contained tree identification books, Gray's Manual of Botany and the three books that comprised Britton and Brown's Illustrated Flora.
Britton and Brown's three books were a botanical key so you could identify an unknown plant. I vaguely remember that you had to determine if the plant had leaves that were opposite or alternate and whichever answer you gave led to the next question and the next until you finally determined the identity of the plant.
If you had the answers to each question, you could get closer and closer to its actual identity.
Wouldn't it be helpful to have something like that to figure out what might be wrong with your bees?
Jamie Ellis and others (Dewey Caron, Debbie Delaney are among the authorities who contributed) have created TheBEEMD - now on the web. What it intends to be, as I understand from listening to the latest edition of Two Bees in a Podcast, is like WebMD for bees. I think it's like my mother's botanical books - a key for identifying bee troubles by following a set of questions and answer choices which lead you to possible solutions. On the podcast they suggested that we go online and put in a common situation and see where it takes us. I tried but unfortunately used two situations that maybe they didn't see as problematic enough to put in the database.
I am often asked at this time of year about bearding and if it means something is wrong or that the bees are about to swarm, etc. So I put that in and it didn't go anywhere, but maybe they didn't consider that a problem. Then I looked for the difference in robbing and orientation - another question I am asked a lot -and that isn't there either. The answer that leads you to robbing says seeing wax crumbs on the landing in cool weather, but we see wax crumbs in extremely hot August here when robbing has occurred. The BeeMD answer helps you understand what evidence indicates that robbing has already occurred, but doesn't clarify what robbing looks like. I would like it to have both.
So here's how the experience goes. First I have to decide what part of the bees/beehive is the area of my concern: 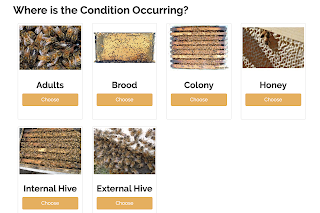 So for the purposes of exploration, I chose Internal Hive.
Then I saw: 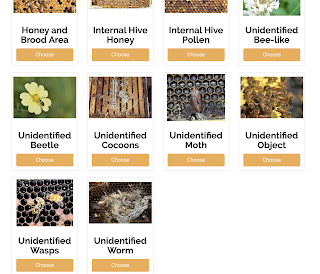 So I chose unidentified worm. I was hoping to see how they determine the difference between a wax moth larva and a small hive beetle larva. Here is what I got: 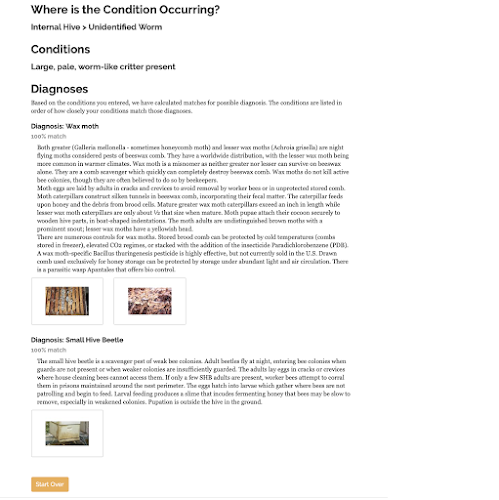 Now, you'll notice they don't have a photo of the small hive beetle larva. On the podcast, they said they had a hard time getting enough/the appropriate photos. There are tons of photos on the Internet of small hive beetle larvae and there are ways to distinguish them from the wax moth larvae, but I imagine there were issues of a proprietary nature. Also some of the areas are incomplete. When I chose "Honey" as my area of concern, there were no questions, no answers, and no diagnoses. I wanted to see if they addressed a box of honey as a barrier to the queen or if they addressed wet-capped vs. dry-capped honey.
I think BEEMD is a work in progress but a really helpful tool if you want to understand how wax moths take over when a hive has died or if you are worried about being queenless, for example. It provides pretty good descriptions of bee diseases. And they want feedback so if you can't get the answer to the problem you are observing in your hive, click on Contact us and fill out their feedback form.
BeeMD feels like a project in its infancy with miles to go to be the comprehensive tool that it has the potential to become.
Here's the edition of Two Bees in a Podcast where they discuss TheBeeMD:
Email ThisBlogThis!Share to TwitterShare to FacebookShare to Pinterest
at 2:51 PM