What to do when you have a pesticide kill

The horror of a pesticide kill is extensive. It starts when you see the basketball sized pile of bees dead outside the hive; it continues when you smell the stench of hot dead bee bodies; and it gets worse when you find even more dead bees on the screened bottom board of the hive. I went through all of this when my best hive was killed last week.

The first step was to recognize the reality of the death of the hive. I just didn't want to believe it and took off box after box and looked at frame after frame, hoping it wasn't true. The hive had almost three full boxes of bright white new wax filled with nectar and some capped honey. The hive beetles had begun their opportunistic sliming of the lower boxes, also with some nectar-filled frames. UGHHH.

The next important step was to report the kill. I felt a little reluctant - what were the officials to do? Bees fly three to six miles for nectar and the source of the poison could be anywhere. But my friends urged me to report the kill. In Georgia, this means contacting the Department of Agriculture and filling out a form.

However, the form is designed for farmers and not for beekeepers. Here's the link, if you are in Georgia. Here is the form - the required responses are starred: 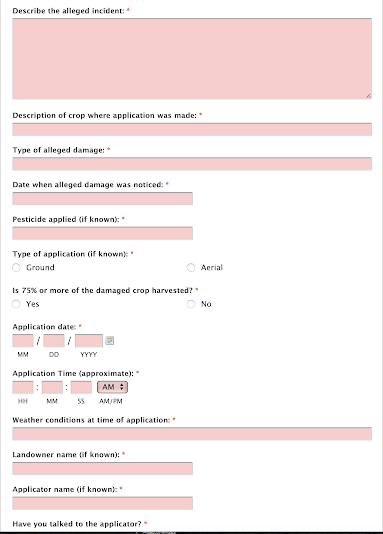 This is not the complete form but as you'll see, most of the questions are irrelevant to beekeepers. Description of crop where application was made: That would apply to a field, but not to the flowers all over the surrounding area where the bees collect nectar
Application date, time, weather conditions at time of application: On some rare occasions, the beekeeper might see and know this stuff but there is no way.
I picked up the phone and called: (470) 270-3044, the number of the Dept of Ag for pesticide kill reports. I left a message, shook my head and truly didn't expect to hear back any time soon. To my surprise, the phone rang minutes later and it was Katibeth Mims, calling me back from home during her lunch hour.
After I described the situation to her, she promised that an inspector would be in touch with me on Thursday or Friday (the next day or the day after). That very afternoon (Wednesday), Brad Baker, the inspector assigned to my case, called to arrange to meet me at the hives on Thursday. Since I know the hive was alive and vibrant on Thursday, April 29, the bee kill likely happened sometime between Friday and Sunday morning. (April 30 - May 2)
Brad was the nicest guy. He arrived ahead of me and when I arrived ten minutes early myself, he had already interviewed the neighbors and checked out the area in which the hives and garden are located. The neighbor directly beside the garden on the downhill side acknowledged that he had sprayed for mosquitoes a few days previously. On May 3 and on May 4, about when the bees died, my neighborhood where the bees are had erratic blasting wind bursts due to a tornado WARNING. And it was windy anticipating the storm on Saturday, the first. The mosquito sprayers are not supposed to spray in high winds, but who knows.
Brad explained that he didn't know much about bees but he and others are sent for backyard beekeepers and their bee guy with bee knowledge goes out to the commercial complaints. He was thorough, filled out tons of paperwork, collected samples of the dead bees and the vegetation around the hive. I tried to tell him about the bees and how I knew it was a pesticide kill. 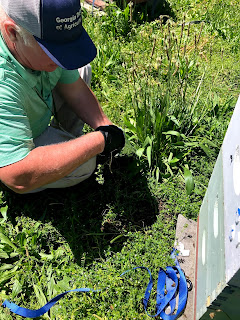 Brad Baker collecting samples of the pile of dead bees. 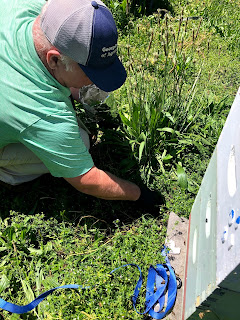 There were lots and he took any number of handful to pack his sample bag. 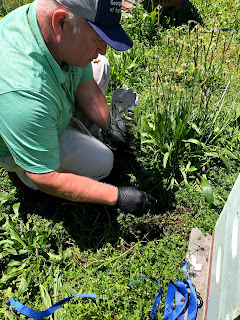 They were packaged in aluminum bagging and he wore gloves to diminish the chance of contamination. 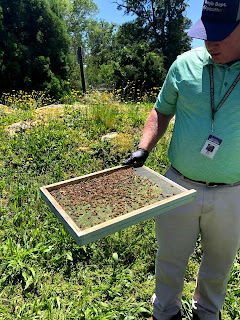 Here are the dead bees on the screened bottom board. 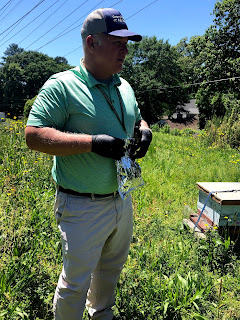 Brad seals up the sample and then took it to his car to put it in a cooler. 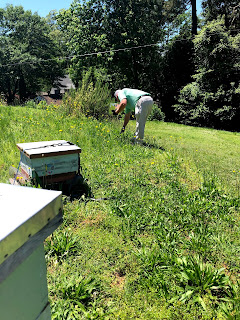 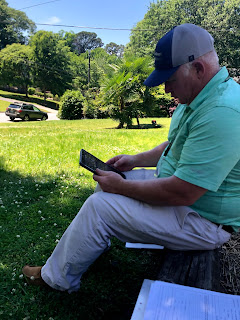 Then Brad and I sat for a long time on one of the pilings lining community garden plots while he filled out loads and loads of paperwork. 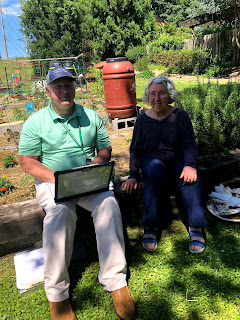 I asked one of the gardeners to take our photo while we were working on the forms.
So now what happens is that Brad sends off the samples to the lab in Tifton, Georgia, where they will try to analyze what caused the bee death. It may take a little while.
In the meantime I divided the white wax honey between two healthy hives - the other hive at Morningside and a hive in my front yard. Hopefully the bees will cap it and I can harvest it.

Email ThisBlogThis!Share to TwitterShare to FacebookShare to Pinterest
at 2:57 PM