Bee Crisis at the Atlanta Airport

A fellow MABA beekeeper got a call from a commercial beekeeper in Alaska yesterday. The beekeeper was calling to report that a huge order of packages had been rerouted in error from Sacramento to Atlanta instead of Alaska. Makes you wonder, doesn't it, if the cargo handler could read - the only thing Atlanta and Alaska have in common is that they both start and end with the letter "a."

So hundreds of packages of bees which should have been in Alaska three or four days ago arrived at the Delta cargo building yesterday. Many were dead. The beekeeper who got the call, Edward Morgan, arrived at the airport and assessed the situation. The bees would not make it until they could leave again at 3:30 on Monday (today) to continue to Alaska and the ones surviving would surely not make it alive to Alaska.

An emergency email went out to the members of the Metro Atlanta Beekeepers that if you could and wanted to try to save these bees, they were yours for the taking. Just come to the airport. My friend and partner in beekeeping at SPARK Elementary, Meghan, took her daughter and went down to the Delta Cargo building. They brought home fifteen packages of mostly dead bees.

The packages were nailed together in groups of five and wrapped in soft window screen wire. 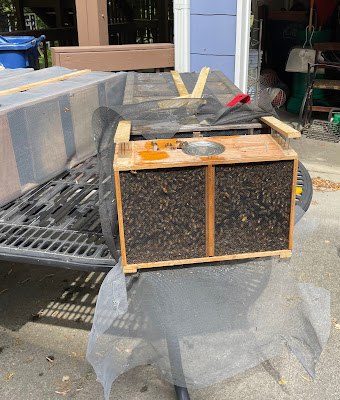 It must have been so hot in that cargo container. Only the bees in the end packages showed any signs of life. One difference in Atlanta and Alaska is that it is already pretty hot here and the bees must have died of heat, crammed into that container.
The package facing us in the photo was the only one of the fifteen with a fully live queen. We checked the queen in every package - all were dead except for one other. That one barely moved. We exchanged the cork in her queen cage for a marshmallow and when she began eating it, she perked up.
We put the fully live queen in between the frames in a hive box and set up a hive box over a telescoping cover to catch all the dead bees. We poured the live and dead bees out of the package. 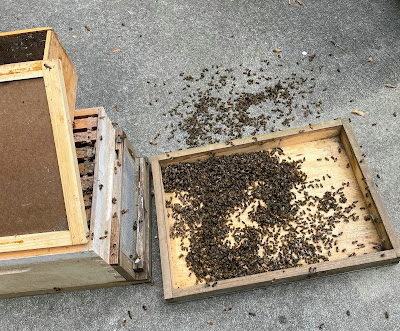 The live bees are in the hive and the package box sitting on top of the hive. The bees you see there are all dead - the ones in the telescoping cover and the ones on the ground. It was heartbreaking.
A few of the fifteen packages looked like this with a few live bees clinging to the screen: 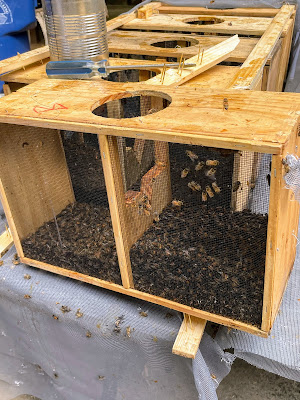 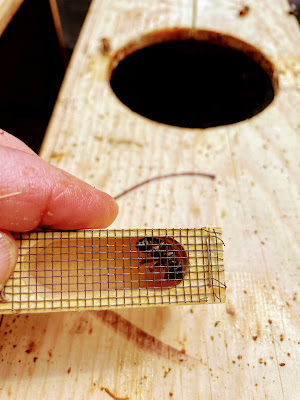 Meghan kept the dead queens to put in alcohol to make swarm lure.
In the end, the bees moved into the large hive with the queen. You can see them moving into the hive.
The marshmallow-feeding queen went into a nuc box. The bees on the nuc box are clustered over the queen cage. Meghan moved the hive down into her yard and left the nuc box open on the driveway near the now all-opened packages. 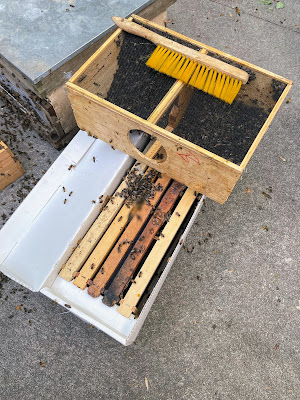 We put two opened packages with the most live bees facing each other above the frame with the queen (we added another to the configuration in the above photo). We figured with a live queen maybe most of those bees left in the packages would go down into the nuc box by morning.
This was a terrible loss and tragedy. However, at least twenty beekeepers went to the airport to take bees to rescue. All were not lost, but thousands of bees suffered death in this awful situation.
Footnote: This horrible incident was covered by the New York Times on Sunday, May 1. I didn't know until I read the NYT article that the bees were unable to access their food/liquid because all of the packages were upside down, meaning the syrup in the cans would not be coming through the holes in the bottom of the cans. When Meghan and I went through the packages she brought home I was struck by how full the syrup cans all were.