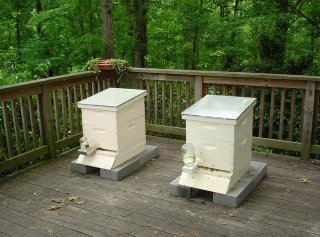 April 28, 2006: Built and painted medium supers. Built foundation frames for one of them (Destin) Will install tomorrow. Better build shallow supers before I leave for the Folk School – they may need them sooner than later.

April 29, 2006: Took FOREVER to light smoker – must get cedar chips. Thought dryer lint might work as well. We used to use that at Girl Scouts.

When I lit smoker and opened Destin, they had built comb above the inner cover. Also saw 3 small hive beetles – or some kind of beetle on the inner cover. Brushed them off but couldn’t find them to kill them. Destin has drawn out the comb on 8 of the 10 combs and is starting on the outer edge – perfect candidate for the new medium. I put it on with great relief.

I looked at Bermuda but it isn’t built out as much – about 6 frames are fully drawn. They haven’t touched 1 or 10 but have begun expanding wax on 8 and 2. I still think I’ll go ahead and add the super just for consistency and because I’ll be at the Folk School for a beekeeper class next weekend and won’t be able to work with the bees.

Early afternoon built frames for the super on Bermuda.

Waited until the end of the day to put on the super. Much easier to light the smoker this afternoon. Must get some chips. They are still busy bees in Bermuda but not as crowded or vigorous as Destin.