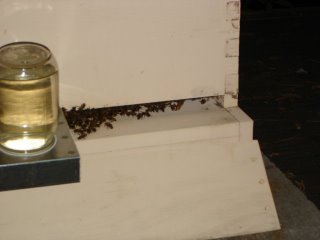 April 26, 2006: Opened the hives to check on the overcrowding because in spite of ventilation and SBB (screened bottom board), they are clustering (bearding) outside the hives in the evening – lots of them.

Inspection on each hive: I pulled up the frame 2 and 9 on each hive – Destin beginning barely to draw them out. I need a definition of what “drawn out” looks like. Bermuda is completely not touching 2 or 9. In general seems to be a weaker hive.

Successes: I managed to light the smoker and keep it lit. I upset the bees in spite of being as quiet as I could but I didn’t get stung. I was a little awkward with the hive tool, but I’ll get better. Also refilled both syrup jars. Forum discussions indicate to remove the syrup jars when the super is added so as not to contaminate the honey produced with syrup.

The medium super arrives tomorrow. I’ll paint it and get it up and running as quickly as possible – maybe add it on Saturday. These pictures were taken at 10:45 PM - and many are outside the hive.