Robber Screen for the Construction Challenged 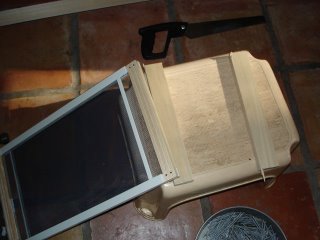 I wish I had taken shop - I liked Home Ec but I wish I had learned more about hammers, nails and saws. My father is very "handy" and has complicated tools like metal lathes and drill presses. When I was little, I could watch him work in his workshop, but I couldn't help - only watch.

I did learn a few practical things by osmosis, I guess. I know to put soap on a screw before turning it and it will go in smoother. I know to think about where the screwdriver will go when it slips instead of using it and having an unforeseen accident. But I can't easily build things on my own. 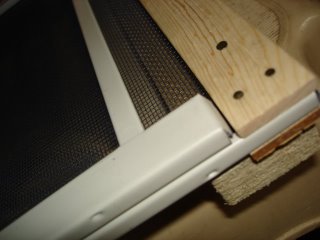 The theory of the robber screen is that you are placing a barrier in front of the hive entrance - thus keeping out the robbers - and making a new entrance several inches above the original one that the resident bees will use. The residents will find it because they will work hard to find a way to get to the queen.

I cut a piece of molding 1.5"X.75" and nailed it
to the wood at the edge of the adjustable screen. 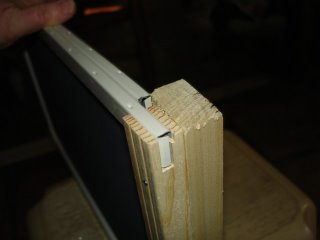 The screen at its original width was too wide for the front of the hive. With the molding nailed in, it blocks the main entrance and creates an entrance about 10 " up from the original. 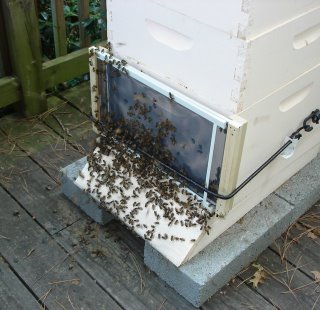 I then took the contraption I had nailed together and used bungee cords to hold it to the hive.

The bees in Bermuda (where the screen has been attached) were furious. They declared it loudly from the front of the hive. I left for the evening hoping they would find their way into the hive.

Email ThisBlogThis!Share to TwitterShare to FacebookShare to Pinterest
at 11:20 PM
Labels: robber screen