My bees are SO SMART!

So you'll remember that I panicked on Monday when I opened the hives to find that Proteus had built crazy comb. Mostly the bees had built up from the bottom rather than down from the top starter strips.....and they had built comb bridging from one frame to the other so that I couldn't remove any frame without making a messy, honey-gooey, drippy - well, you get the idea - in the hive.

After getting advice from my fellow beeks on Beemaster, I opened the hives again on Monday afternoon and cut all the bridging comb and moved it to the base of the frame.

Today, armed with rubber bands (the very large kind), I opened Proteus again with the plan of using the rubber bands to "tie" in the comb that I knew I was going to have to essentially cut and paste to remind my bees that comb should stay IN the frame - I think it's the equivalent of telling the bees that they have to color inside the lines.

Well, I opened the hive and those girls learn FAST. None of the combs had bridging comb between the frames. Some of the frames in the center where the mess was the worst were kind of fat, but still within the frame. There were only three with problems and I solved those by cutting and not with rubber bands. HOORAY 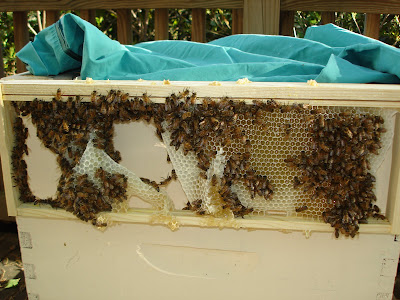 I've always worked the bees with gloves on and today I only wore a glove on my left hand. It was freeing to have my fingers not have those leather extensions that the too-big gloves cause. I didn't get stung. BTW, it's cold in Atlanta today so the green thing on top of the hive is a pillow case that I used to cover the open hive while I worked on the messy frames. 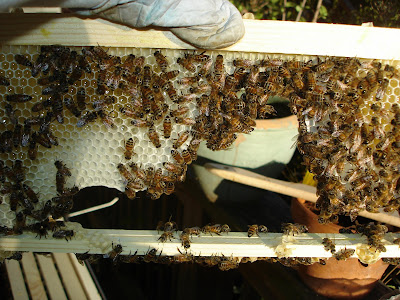 Not too bad, huh? 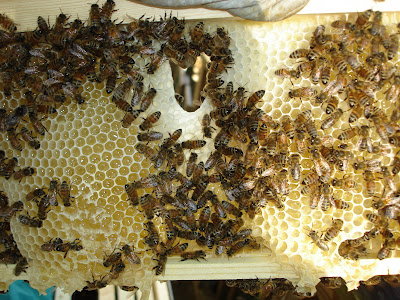 In Mellona, the other hive with starter strips, the bees had chewed away the wax that I had put in the bottom groove of three frames, so I took it out altogether. I replaced frame #5 with a drawn out frame from last year to help them get the message about coloring within the lines. But the bees in Mellona don't seem to have the same mind of their own that the bees in Proteus have, so they probably would have done fine with just the starter strips.