Set up Weak Hive with a New Medium Box

The last time I looked into Bermuda, the weak hive, the bees were increasing in number and the queen was expanding her brood pattern to five or six frames. I removed a frame of honey from last year (we have a nectar flow on now from the tulip poplar, among other plants and trees) and replaced it with a frame with a starter strip of small cell.

It's about a week later and I think I should give them more space for brood, so I set up a second medium. I wanted to inspire these bees for small cell, so I put in nine frames of starter strips and one frame more or less in the center (with ten, where is the center?) of almost a full frame of small cell. I did this to give them more of a guide. 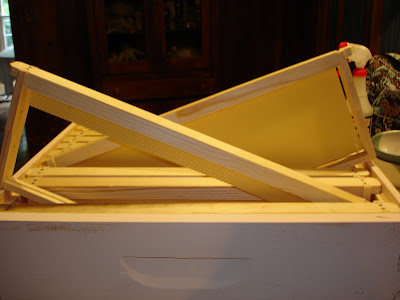 Since I'm regressing this hive to small cell, I dated the frames so that I will have some idea when I replace them next year. My understanding of small cell is that the bees will have some trouble with it this year, regressing to smaller cell, but not to the natural cell size until one more "regression." To accomplish this, I'll need to replace brood frames again with small cell, so I dated these. Next year I can pull some of these 2007 frames and put in starter strips again, and my now much more adept bees will draw exactly what they need....assuming they live through the winter. 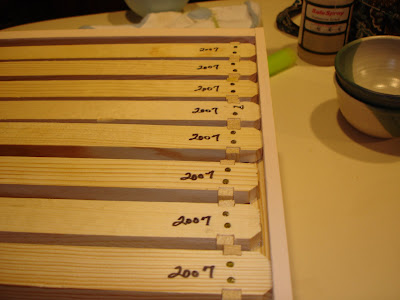 Here is Bermuda with her new medium super. I installed it with great adventure. It was quite cold in Atlanta for April 9 this morning. When I went to the hive around 11 AM, it was still only in the high 40s. Ordinarily Bermuda has been a placid, slow moving hive, so I wasn't too worried about opening the hive just long enough to put on this box and replace the inner cover and telescoping lid.

I put on my veil and went to the hives, carrying my hive tool in one hand and my gloves and camera in the other. I set down the camera (and absent-mindedly, the gloves as well) and opened the lid of the hive. The hive was quiet, but when I removed the inner cover, they were no longer quiet and placid. The bees were thick on the top of the frames and flew out angrily and I was stung on each hand.

I hurriedly put on my gloves and in the process, trapped a bee under my glove, who of course also stung me on my left arm. This shocked me and I dropped my camera, breaking it.......costly beekeeping moment. The picture below is the last picture taken with the camera before it gave up the ghost. 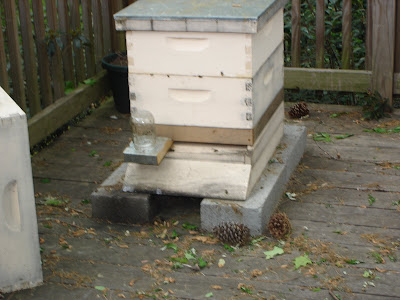 Oh, by the way, after waxing in the starter strips, I poured the remaining wax through panty hose (new) into a bread pan as a mold. The double boiler top in which the wax was melted still had wax residue on it. I poured boiling water into the pan and the wax now hardens on the surface of the water. I can pick it up and add it to my frozen wax cappings in the freezer. "Waste not, want not," the old folks say. 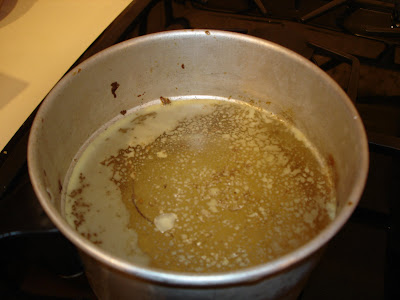 Extra costs of beekeeping this week:

1. I had to buy a new chest freezer. My 30 year old freezer finally died, not of its own accord but because a critter in my basement ate through the electrical cord and by the time I noticed it wasn't working, it was past repair.
2. I have to get a new camera since mine died when I dropped it today.

Lesson learned: Put camera on strap around neck rather than wrist.

I needed a new camera - this one has been taking rather blurry pictures and just yesterday I was thinking that perhaps I should look into a new one. Also the one that I broke was only 5 megapixels -

I came inside, read reviews, and immediately ordered a new camera which should be here in about a week, but probably no posts before I get new pictures. I've ordered one with higher resolution and with an anti-shake feature to control the blur. It will be better in the end for both the bees and my grandbaby. However, I ordered an economic camera given that my camera is always subject to sticky hive stuff as well as the possible casualty of a fall from a high place.

This is a wonderful but more expensive hobby than I imagined!