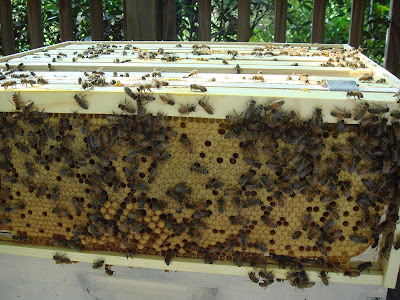 Bermuda has been slow to build up. Today every frame in the brood box that I pulled looked like this - covered all over with capped brood and with a section of drone comb somewhere in the center. They had drawn every frame but one in the second box.

In the first box I took the two outside undrawn frames and moved them in to the center of the box with drawn comb on either side.

The ladies in this box sit on the front porch all the time and don't seem to be foraging like the other hives. Given how much they sit, I thought there would be no work product in the hive, but they have been busy. I left them with a new medium with starter strips of SC. We'll see how they do.

I did a powdered sugar shake on this hive as well as the other two that I inspected.

Mellona, my largest, most productive hive, is buzzing with bee work every time I go near it. These girls have been working hard and have a number of supers filled with capped honey. Here's an example of their beautiful honeycomb drawn completely by them from starter strips. Looks yummy, doesn't it? 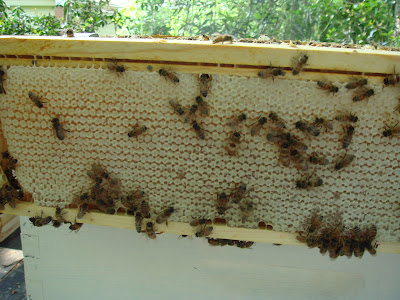 When I inspected Proteus, I was tired and didn't do a thorough job. 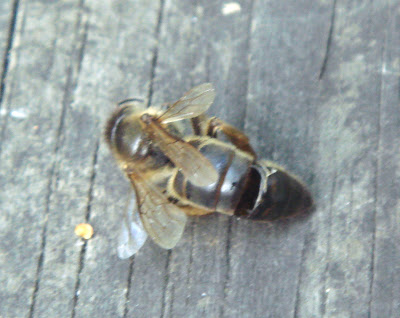 I needed to look into the brood box at each frame to see if there had been a supercedure or if there were swarm cells. The hive has been moving very slowly - filling supers very slowly and drawing wax like molasses in January. I have wondered if they still have the original queen and if they are making wax and brood.

Proteus has quit drawing crazy comb, and did have at least one very heavy, very full of honey super. They only have brood in the bottom box, which surprised me. However, I had been stung once by then and was tired and very hot, so I'm saving a thorough inspection of Proteus for another day.

Right before I began looking at Proteus, I had scoured the deck trying to find the bee that had been in the center of the bee-ball from the gift swarm yesterday. I remembered the bee because she was all black and not striped like my other bees. I found her dead and I am pretty sure this is the queen. She is probably a virgin queen because her lower abdomen is small.

I'm hoping that she has a sister in the new hive who is queen, but I'll wait to inspect this "extra" hive until the end of next week. That this queen is dead took the wind out of my sails - which is probably why I had little energy for the inspection of Proteus' brood.