The Small Swarm Nuc Has a QUEEN! 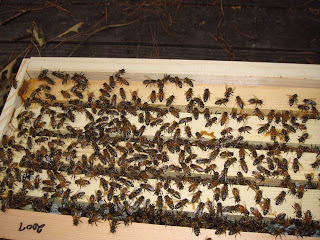 Today I opened the small swarm nuc and was greeted by many happy bees. I crossed my fingers that there was a queen. I checked the first frame from the old nuc - darkest one in the picture - no activity. I checked the second where I found capped honey around empty cells where the borrowed brood from Bermuda had long since emerged, but no eggs or larvae.

Then I took out the third frame and there it was - many, many cells of very, very young larvae, larvae in every stage - in the upper center you can see a larvae being capped. I saw eggs - she is there this very minute doing her queenly duties.

How exciting is that! Between my efforts to give them brood and eggs and their incredible ingenuity that allows them to create a queen - not to mention that the queen survived her mating flight and returned to the hive to start her job, I now have a new hive started! 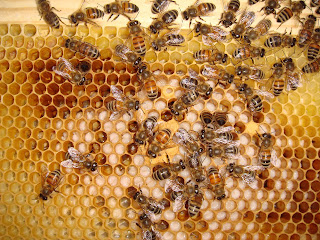 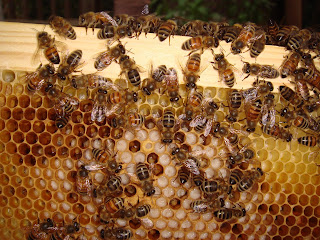 I really feel like a beekeeper now - one year and two months into this endeavor.

Other items from this morning's inspection:

I also returned honey dripping frames to Proteus for clean-up but didn't disturb the hive since it hasn't been a week yet since I put the queen excluder in place. The harvested honey frames I had were from removing 6 frames in the full honey super above Box 1. This meant that I had 6 dripping frames and 4 SC starter strip frames to put on the box.

I peeked into Bermuda and they were working away.

When I got to Mellona, I took the box of beautifully capped honey that I am going to make cut comb or chunk honey with off of the hive. I did this in a back-friendly way using two empty supers. I took one frame at a time off of the hive, shook the bees off, and put it in an empty super covered by a sheet. When I had five full frames in that super, I carried it inside to my kitchen. I then took an empty 8 frame medium box and put the other five frames into it.

When I do this usually I shake the bees on the individual frames back into the hive, holding the frame over the open hive. I had closed the hive up by the time I got to these last five frames so I shook the frames in front of the door. Bees fell on the deck in front of the hive in the cluster you can see in the picture.

I left the open box on the ground beside the hive so the remaining bees can make their way back to the hive on their own timetable. Within 10 minutes there were no bees on the ground or in the empty super.

It dawned on me as I got ready for work this morning that I need to put a super on Mellona - they now have no space and I won't harvest this cut comb honey until Tuesday night, so I'll hurry and get a box ready for Mellona to keep them having enough room to be happy. 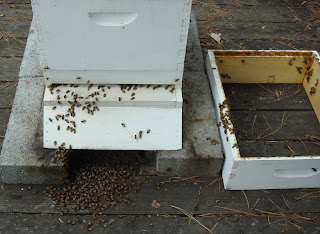 Note: I came home at lunch time and took the now bee-free box sitting beside Mellona and filled it with frames from last year out of my freezer that had comb remnants on them for starters for the bees. I threw a helmet on over my work suit, went out in my sandals to the hives, opened Mellona, and added this super now filled with frames for the bees to use for themselves.
Email ThisBlogThis!Share to TwitterShare to FacebookShare to Pinterest
at 11:56 AM
Labels: adding frame to queenless hive, capped honey, cleaning honey supers, queen bee, small swarm