Will Proteus become Proteus A and Proteus Bee? 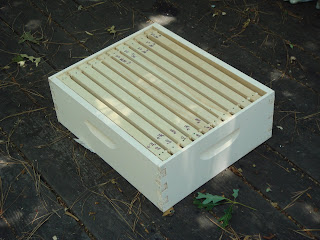 I posted on Beemaster because Proteus is a hive that is arranged in an unusual way. 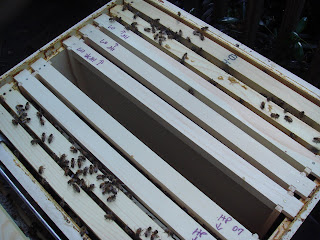 I also wrote about it earlier on this blog. Today I went into the hive to see if I could be a good beekeeper to these bees.

It's possible, as mentioned earlier, that Proteus is a two-queen hive. Sometimes, as Michael Bush writes about it, it is efficacious to have a two-queen hive. But the way I see it, my bottom box is honey-bound and the queen has no room to grow, so it's up to me to find her some space.

As I see it, with Hive Box 2 being filled with capped honey, it is highly likely that there is a queen, laying and growing brood in the bottom box (Box 1). I saw the queen in Box 3 above the honey, laying eggs. She is a young queen, unmarked - not the original queen in this hive as the season began. I had added Box 4 about 3 weeks ago when Box 3 was fully drawn comb.

At the advice of people on Beemaster, this is what I did today. I prepared a new super to put on Proteus (see first picture). BTW, I bought the medium frames for this box from Walter T. Kelley. This is the first time I have ordered frames from Kelley. They are built differently from other frames that I have. I found them easier to put together than my other frames from Dadant, but rougher in their construction.

I used no smoke today to keep the queen from moving somewhere strange. As a result I got stung on my left thumb - this after being stung on my right thumb on Monday!

I went to Proteus and removed Box 4 (four frames of comb/honey and six frames partially drawn or unaddressed). I also removed Box 3 (where I saw the young queen laying). I then took Box 2 (full of capped honey) and removed the center six frames. I replaced those frames with five of SC starter strips and one full frame of SC foundation. You can see its picture in the middle.

To complete this part of the operation, I had to get the bees off of the six honey filled frames. I shook the frames hard above Box 2 and most of the bees went back into the box. Then I used my bee brush to removed the remaining bees and put the honey frame into the new super and covered it with a top.

Here's the theory: Proteus may have a queen in both Box 1 and Box 3. To determine this, I put a queen excluder (I've never ever used one!) between Box 2 and Box 3. 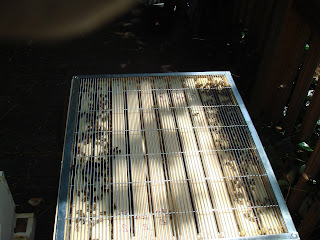 This now means that Box 1 which was full of brood and possibly houses a Queen A has Box 1 as well as the empty frames in Box 2 to build up the bee numbers. I kept two frames of honey on either side of the center and put the empty frames in the center, with the full frame of foundation at position #5.

The queen excluder will keep Queen A (if she exists) from moving above Box 2. See the bees below the excluder, clustering on the four frames of honey.

One thing I didn't think about until I read a post about something else on Beemaster: The drones in the upper hive group (boxes 3 and 4) will not be able to go through the queen excluder because they are too large. In order for this to work, the hive has to have an upper entrance. Thankfully, since I prop the top of all of my hives with a fat stick, this hive does have an upper entrance through which the drones can come and go (as well as the other bees if they choose).

At the end of a week or so, I'll check to see if there is new brood in both Box 1 and Box 3. If so, I have a two queen hive and will split the hive into Proteus A and Proteus Bee. If not, I'll simply remove the queen excluder and let Proteus continue in its unique approach to life as a hive.