When I inspected a hive last week (the smallest swarm hive), I found that I had put shallows in a medium super and the bees had built burr comb below the shallow frames in the space above their bottom box. I scraped off most of it and put the comb filled with nectar on top of the inner cover for the bees to save the nectar. 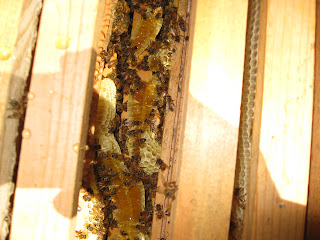 In place of the shallow frames I put in medium frames. Some of the medium frames had popsicle sticks for starter strips and some had wax starter strips. I put a frame with a full sheet of foundation in the center. This week there was more burr comb and instead of building comb from the top of the frames, the largest comb they had drawn out was the one below which they built on the bottom of the frame. 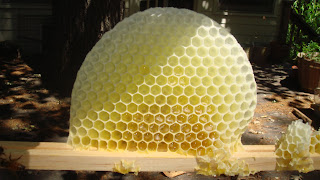 Again there was burr comb on the edges of most of the bottoms of the frames on one side of the box. I don't usually smoke the bees after an initial puff at the door. To get them out of the area with the burr comb, I did smoke them and they disappeared down into the hive.

This time I carefully scraped all of the burr comb off of the tops of the frames and off of the frames below. I have to train these girls to draw their comb straight and pretty. You can see below the amount of burr comb I scraped off - it will be nice for the solar wax melter, but what a waste of energy for the bees in this hive. 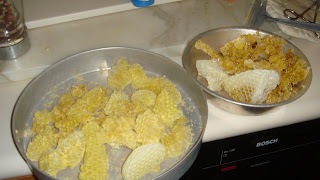 Thankfully, Bermuda has some beautiful capped honey in her next to the top box. I will take it off this weekend before the bees can track pollen and dirt over the gorgeous white comb. Isn't it pretty? There's a whole box of this. It does have a problem that I'll have to address. In frames 4 and 5, which were put in the hive without foundation, the bees have built one very wide comb. The comb is straight and goes the right direction, but instead of filling one frame's depth, they used two.

I both have no idea how I'll get the bees off of that particular duo comb and don't know what to do with it. If I can get it out of the hive in one piece, I'll take pictures. Then I'll probably crush and strain it. 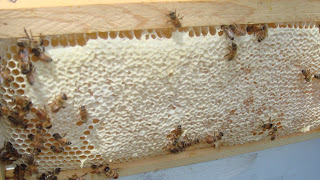