It's time to Name the Hives

So all the hives are growing appropriately and now it's time to give them names.

From left to right on the deck we have Bermuda, Mellona, Aristaeus2, and Hyron.
This hive below is the nuc that arrived queenless (or apparently so). The supplier gave me a new queen who was released but disappeared and there still was no laying activity in the hive five days later.
I believe this hive had a virgin queen from the beginning and she is now laying well.
"Hebrew scholars offer other possible Semitic origins of devorah,the modern Hebrew word for bee. They consider ancient cognates like the Aramaic for bee, debarta, and its Syriac cousin, deboritha, as well as the Hebrew word for honey, debash. There is another shoresh (three-letter word root) brought forth for consideration: the Mandaic Aramaic dibra 'back, tail, hence 'bee's stinger' (?) to be compared with the Arabic dubr 'backside, tail.'" I found this quote here.

I think since this hive is closest to my neighbor's yard and in full view and since this hive is directly beside the path the yard guys have to walk on to work in my yard, Devorah seems like a gentle name for a hive which at the moment appears to have a gentle feel. But with the sting of the bee implied in the origin of the name, we can also expect Devorah to keep the hive safe. 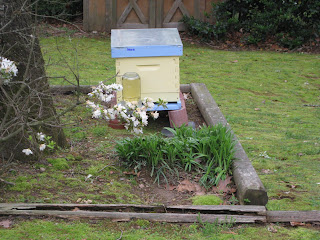