In Bermuda I had noticed a huge honeycomb and knew I had to take it out of the hive today. The bees had taken advantage of the foundationless frame and it looked to me as if they had built comb hooking it to two side-by-side frames. 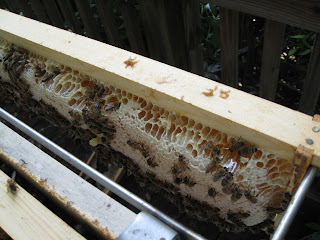 The other side of the comb was beautifully capped honey - I wish it had looked like this on the other side. I could have boxed it for cut comb honey. Looking like it does, I can crush and strain or cut it for chunk honey in a wide mouthed jar. I'll probably do the chunk honey so I can remember what this huge comb looked like as I enjoy the honey. 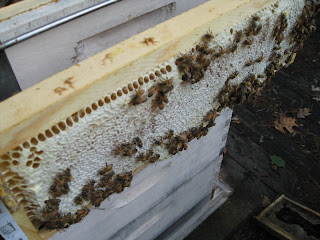 Here's a side view and you can now easily see how the comb was expanded under the second frame but not attaching to it. 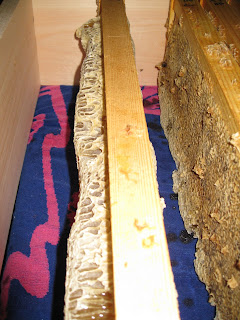 There's another comb in this same box with the same configuration (two frames with one very fat honeycomb), but they hadn't capped it enough to take it off of the hive. I'll fill the empty spaces in this box with frames WITH foundation to get these bees back on track.