When I set up my two non-deck hives, Melissa and Devorah, my daughters told me that my backyard wouldn't be touched when the yard guys came. Sure enough last week, they worked on my front yard but completely ignored my backyard.

Today I was there when they arrived. I stopped one of the men and asked him about the backyard. "We're too scared of the bees," he said. I asked if he would do it if I gave him a net for his head. "OK," he said but he looked skeptical. The fellow working with him told me that he himself was allergic to bees and his throat swelled shut if he got stung. "You don't need to be in my backyard," I said.

The first guy put this camping mosquito net I have over his head and proceeded to weed whack and blow off the backyard. He seemed somewhat reassured when I told him that bees don't really hear and that the loud noise wouldn't bother them. He should, however, try not to fling stuff into the front of the hive. He did a fabulous job, the bees ignored him altogether, and I took his picture while he worked. He didn't get stung and we agreed that I would leave this camping headdress on a hook in my carport so that he could work in the back this summer. 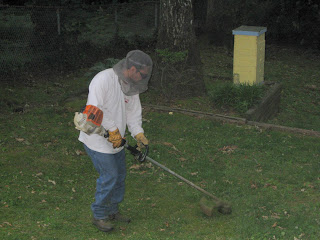 I kept my fingers crossed the whole time because it was very cloudy and thunder was starting. The bees can be easily aroused under those conditions, but the bees in both yard hives did their thing and ignored his yard work.

Of course, I gave him a jar of honey and promised more when I harvest this year! 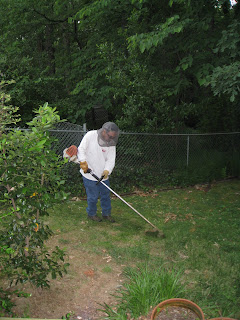 Email ThisBlogThis!Share to TwitterShare to FacebookShare to Pinterest
at 5:47 PM
Labels: bee veil