I'm very glad to share with all of you some of what I learned at Young Harris. You realize, of course, that you are only getting my take on what the speakers shared and that may not be entirely accurate! I encourage you, if there are beekeeping gatherings - meetings, conferences, local speakers - in your area, go to hear them.

Beekeeping is an art as well as a science. I learned SO much at Young Harris, as I did last year as well. Every speaker brings his/her own perspective and good ideas.

We were so lucky to have with us Kim Flottum, editor of Bee Culture magazine and author of The Backyard Beekeeper. I heard him speak on two topics.

Here he is talking about "The Many Uses of Nucs." He doesn't think of nucs as devices for making splits. Instead he uses nucs as a source of "spare parts" in the bee yard. By this he said he meant that with a five frame nuc that is thriving, you could take out a frame of brood or honey to give to a hive in need of either. And the use of nucs can provide special "spare parts:" extra queens, should you need them. 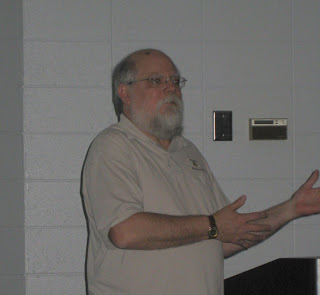 In addition to the above wisdom, he suggested a unique method of requeening. He starts the nuc with five frames (his rationale for the five frame nuc is that it is convenient to buy nucs that size). He only uses medium boxes, so he buys medium nucs.

He puts together the nuc with 2 frames of mostly eggs, one of sealed brood, one of honey and pollen and one foundation or drawn comb. He takes these frames out of strong hives and gives one shake to get most of the bees off of them, leaving the young nurse bees still on the frame, before adding them to the nuc. This is the core of a hive and with these resources, they make themselves a queen.

After the queen is up and working the nuc to build it up, if Flottum has a queenless hive, he removes five frames from that hive and substitutes the five frames from the nuc and presto! he has requeened. The five frames he removed from the hive go into the nuc (including a frame on which there is a queen cell or a new egg) and he begins the process again. Sounds like no fuss, no bother.

He sometimes even overwinters nucs...and he's in very cold state, not Georgia where we should fairly easily be able to overwinter a nuc colony.

After his talk, I went to the Brushy Mountain vendor table and ordered two medium nucs. I've had queenless situations in both of my two beekeeping summers and this sounds like a painless way around the problem. 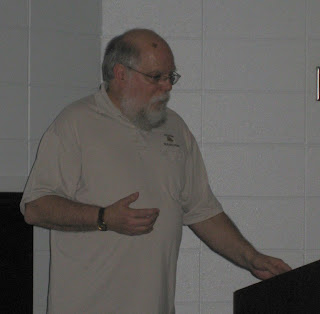 In the second talk I heard Kim Flottum give, he talked about using the web to access beekeeping resources. I must admit that I have never looked at the Bee Culture website as anything other than a link to the magazine. Well, think again. It's a fabulous link to so many helpful beekeeping resources.

For example, if you click on The Science of Beekeeping, it takes you to the many universities who have bee labs, newsletters about apiculture, and research information. Among many others Flottum talked about the University of Nebraska where you can read about the origin of the powered sugar treatment for varroa mites, UC Davis, which has an outstanding newsletter from the Dept of Entomology. Assuming you don't get distracted by the wisdom-filled university web pages on bees and bee labs, if you continue scrolling down the science of beekeeping page, you can find links to the Department of Agriculture for all the states and for Canada.

You can also click on "Catch the Buzz" to sign up for Flottum's own newsletter. Since he had praised a number of University entomology newsletters, he joked about how after his talk, all of us would have very full email boxes!