I had the privilege twice today to hear Ross Conrad talk about his methods of beekeeping at the Young Harris Beekeeping Institute today.

He discussed a way to handle American Foulbrood without burning the hives. He advocates removing the bees from the affected hive, shaking them into new hive boxes with new frames, all new equipment. Then he burns the old frames. He scorches the boxes, covers, bottom boards, etc. like I did for the boxes donated to the Girl Scout troop.

He notes that the above process allows him to save the bees. What is destroyed are the frames of larvae contaminated with AFB, but the bees are not sacrificed. In general each time he was the speaker he clearly communicated that he was oriented to the bees' needs rather than the needs of the beekeeper.

I hope never to encounter AFB, but what I most learned from was the second talk I heard.

As I understand it, this is what he advocates:

We want to promote strength in our hives. This often means promoting the growth of local bees. If you order bees from other locales than your own, then you are asking the arriving bees to adapt to your climate, environment, etc., but if you are using your own strongest bees to expand your stock, then the bees have already demonstrated their ability to thrive in your environment.
Taking this further, he also prefers to use queens that his bees make rather than purchasing queens.

Following this logic, if you have a strong hive then that hive should be one that you capitalize on by expanding it through making nucs.

From his strongest hives that he would most like to duplicate, he makes five frame nucs using as the center frame a frame of new eggs and young brood. On either side of the center frame he puts a frame of larvae and capped brood. Then the last two frames are frames of honey to support the new nuc.

It will take the nuc 16 days to make one of the eggs into a queen. Then the queen has to harden, orient and go on a mating flight. This can occupy a number of other days. By the time she starts laying, there has been an approximate 3 week interruption in the life cycle of the varroa mite. Since the adult varroa mite lies in wait for the tiny larvae on which she lays her eggs, the varroa mite stops in her tracks until the new queen starts laying. Without tiny larvae on which to lay her eggs, the varroa mite can't reproduce herself. This is the cycle disruption.

Ross leaves the nuc alone for 30 days and then inspects it. If there is evidence that the new queen is laying, he moves the nuc into its own hive box. Now his apiary has another hive derived from his strongest hive. And the varroa mite has been stymied for three weeks. 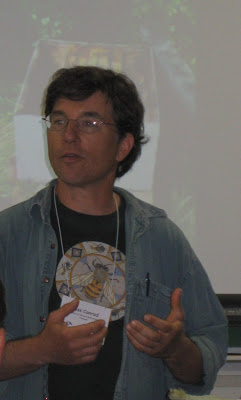 One of the best things about listening to Ross is his obvious earnest, genuine interest in the bees. He has thoughtfully come up with a system that supports this caring for the bees and expresses his own organic approach to the world. 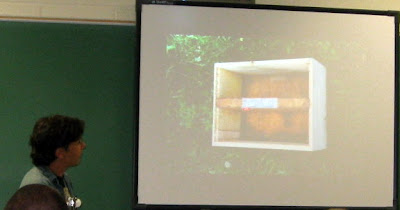 Sometimes he puts two nucs into one hive body to get them started. Here is a rather faded picture of a slide he used to show the division of the hive.

He uses a special bottom board with cut out entrances for both nucs, one on one side of the box and the other on the opposite end. the center is barricaded by a division feeder with all space covered, blocking the movement of the bees from one side of the hive box to the other.

In general I enjoyed so much his positive, genuine approach to beekeeping. I bought his book:
Natural Beekeeping: Organic Approaches to Modern Apiculture and had him autograph it for me!