At the end of the day when hopefully most of the foragers were home, I put the absconded swarm hive and the weak swarm hive together. I carried the absconded hive back up on the deck and put it in combination with the Hyron hive that has been weakly surviving all along.

Hyron was my first swarm hive back on April 1 and has not built out of the first box to this day. It's a sad little group. There is a queen and brood but it never has taken off. Hyron2 which was robbed out and absconded appears queenless at this point although most of the bees are in the box.

I opened up Hyron and put newspaper over the top of the box. I cut several slits with a knife through the newspaper to facilitate the bees chewing through. The idea is that by the time the bees in the upper box chew through to the lower box, everybody will be friends.

I removed the Imrie shim and the feeder bag - I actually don't know what to do about feeding and will post on Beesource and Beemaster to find out how to manage this. 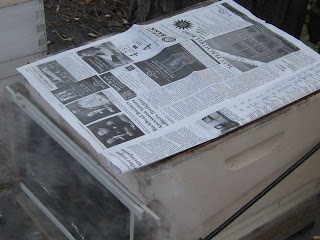 When I put Hyron2 on top, I left the Imrie shim, but didn't replace the baggie feeder. I don't want to encourage any food fights as they get to know each other. Keeping the shim on does give me an easy option for feeding them in about a week when the combination will hopefully be successful. 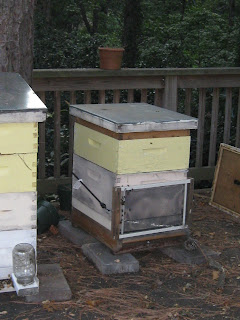 I also removed the robber screen. I thought since there's not really anything to rob out right now, it isn't really necessary. I also thought that it would be easier for them to carry out the newspaper shreds if I didn't have the entry blocked. 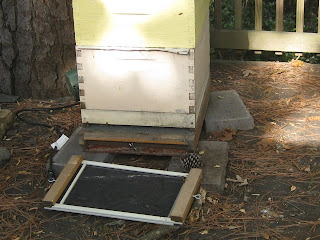 It was cooler than usual this morning but already the bees at this hive were orienting. I expect that it will go well and I am keeping my fingers crossed for a successful hive combination. 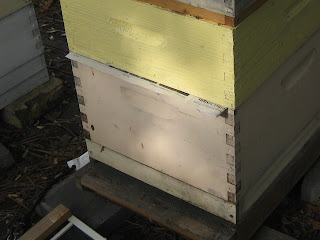 Email ThisBlogThis!Share to TwitterShare to FacebookShare to Pinterest
at 10:03 AM
Labels: hive combination, newspaper combine, swarm