I am SO prepared for the small hive beetle. I have made Sonny-Mel traps from sandwich boxes, I have ordered and own AJ's Beetle Eaters, I have two of the Hood beetle traps. But this year I'm not using any of them. Knock on wood, I have rarely seen a small hive beetle this year. Amazing luck for me and certainly good luck for the beetles who would meet a vinegar/oil ending should they have visited my hives.

I'm not totally free of the pest. Yesterday I saw a few in my two hives that are in my yard and not on my deck. The bees don't like the SHB and when they see one, they pursue it aggressively.

In the picture below two separate bees are aiming for two different small hive beetles. They run toward the beetle and try to discourage its presence in their domain. I smashed the six I saw with my hive tool. 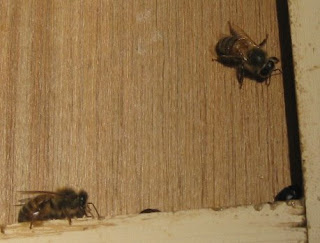 The picture below is a small hive beetle that I injured with my hive tool. The bees finished him off. 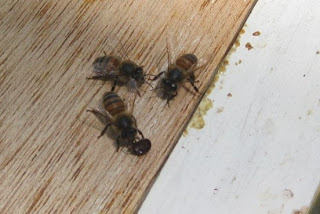 Then, as they would with a member of their own kind, a bee (not well-focused) picked up his little carcass and removed him from the inner cover! 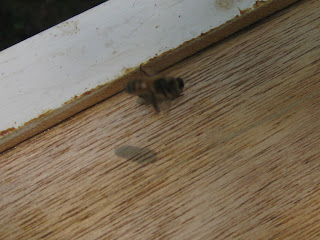 I have strong hives this year that seem to be keeping the SHB in check. However, I have all the equipment, including a mouth aspirator to suck the little guys into a trap, for any occurrence next year!

Email ThisBlogThis!Share to TwitterShare to FacebookShare to Pinterest
at 9:51 AM
Labels: SHB, SHB trap, Sonny-Mel trap