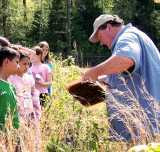 Keith Fielder, [if you click on the link, his write-up is on page 3] a Master Beekeeper in the state of Georgia, was the speaker this past Wednesday at the Metro Atlanta Beekeepers Association. He spoke on Bee Biology for Dummies. I enjoyed what he had to say and learned some things I didn't know.

1. Bumblebees scent-mark the flowers they visit. This explains why some flowering plants have one or two bumblebees one day and are covered the next.

2. Flowers have a negative charge. The hairs on a bee's body have a positive charge. Since negative and positive attract, the bees are literally drawn to the flowers. Pollen is also attracted to the positive charge on the bee. And interestingly enough, women's hair is negatively charged so when bees fly into your hair, according to Keith, they are drawn there and can't prevent being pulled into your hair!

3. The pollen basket isn't really a basket at all but rather a concave surface covered with stiff hair. The bee combs the hair on its body, gathering the pollen on its body hairs and bringing the pollen into a ball on its leg.

4. And, away from bee biology into commenting on the hive, Keith said that the honeycomb is the "liver of the bee colony" in that it absorbs all the yuck that comes into the hive. This is important rationale for getting rid of old comb on a regular basis and bringing new comb into the hive.

We are very lucky in Atlanta to have such a wealth of wise beekeepers who come to speak to us.

Keith Fielder is full of knowledge. This is the fourth time I've heard him speak.

Our speaker in October for his second visit to our club this year is Dr. Keith Delaplane.