This was a bad day in the beeyard. Today I found that three of my hives are queenless.

I have known a number of people who "keep" bees - which simply means they have hives and those hives they leave pretty much alone. I have been that sort of beekeeper since the beginning of July. I opened the hives to harvest the honey but I haven't made a deep inspection of any hive in over a month.

I have lots of excuses. This hasn't been a great summer. My dog died unexpectedly at the end of June. My grandson and my daughter and son-in-law moved to Virginia at the end of July. And I've been teaching a 10 week semester at the Emory med school in the physical therapy department - twice as long as my usual summer teaching with them. But actually none of that justifies doing a poor job as a beekeeper and I have not been paying the right kind of attention to my bees.

The combined hive that I was concerned about had no queen. There are bees in the hive but it's really weak - I even saw wax moth worms on some of the frames. I don't know what to do with those bees who represent two poor hives, now without a queen anywhere and absolutely no brood or larvae. I had a baggie of sugar syrup on the hive that I put there last week and it hadn't been touched. I closed that hive up and thought that tomorrow or Sunday I'll shake those bees into another hive.

Then I went to one of my yard hives to check on it and found it completely queenless as well. All of the frames in the brood box looked like the one below. There was honey - about a box - and another box with no honey. 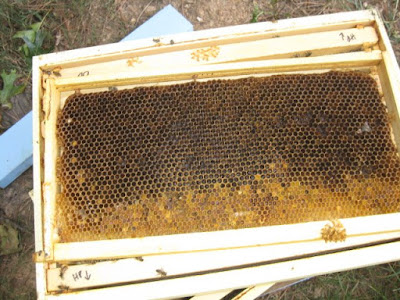 The wax moths had come in and there was wax moth debris all over the inside of the hive. This hive had a lot of bees in it, though, so I did combine it with Aristaeus on my deck. 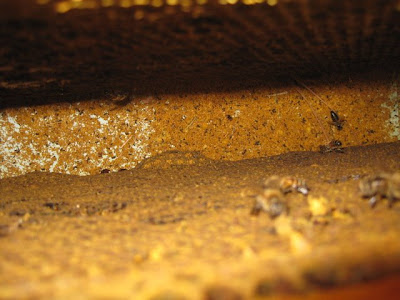 I took the "brood box" - a misnomer if there ever were one since there wasn't a single capped cell and no larvae or eggs - and put it on top of Persephone with a sheet of newspaper in between. 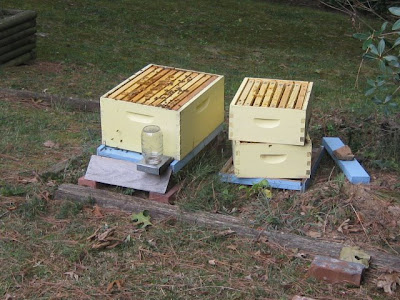 The remaining two boxes I put on the bottom board and covered them. Tomorrow I'll shake the bees from those two boxes into the top of the combination where their sisters are.

Here's a picture of the combination. I hope this works. The hive below is quite strong. 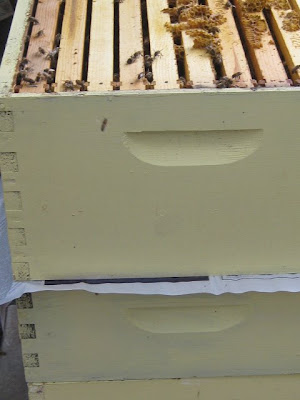 And then sadly enough, I opened Devorah - my last yard hive. It was boiling over with bees. In addition it had two boxes solidly full of capped honey. I went down into the bottom box and there wasn't a single capped brood cell, no eggs, no larvae, no queen to be seen and certainly no evidence of a queen.

This hive looks so strong that I hate to lose it. I ordered a queen from Rossman that should arrive on Wednesday or Thursday. Meanwhile I will see if I can get a couple of frames of brood from Mellona to add to this hive. If they don't make a queen themselves at least it will give them something to do while we wait for the new queen.

So here's the end of the summer tally:
So at one point this summer I had eight hives - I'm down to four thriving hives and one bustling but queenless hive that may not make it although I have ordered a queen.

I feel despondent about my bees. I should have been paying better attention so that I could have addressed this problem before it got so bad.