Devorah--the Re-Queened Hive and Her Progress

Right before Labor Day I installed a new queen in this queenless hive. There was absolutely no brood in the hive and the cells in the brood box were polished clean. The bees were angry and the hive was not doing well, as would be true of any queenless hive.

I installed the new queen and went out of town. When I returned the queen had been released and the hive seemed to be buzzing along.

Today I inspected to see if she had actually begun laying. My first sight was this wax moth worm being dragged out by a house bee. I took the shot after the house bee had returned to the hive. My heart sank at the idea that wax moths had overtaken the hive. 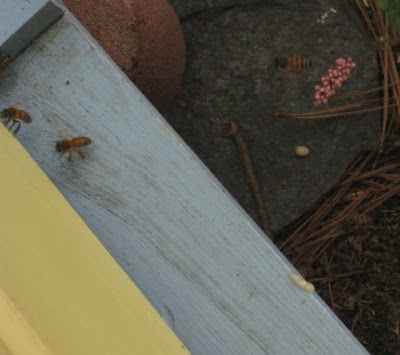 I also saw small hive beetles, as I did on this inspection in all of my hives. Here's one just hanging out with the bees. 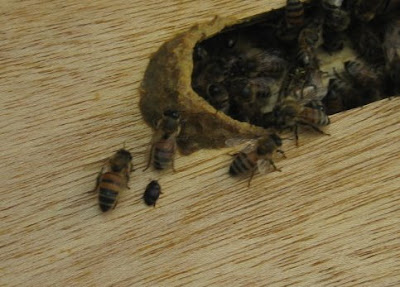 But when I opened the previously empty brood box, I found to my huge relief, there were brood cells, capped and ready to emerge. I saw some larvae but didn't look at more than three frames in the brood box. I just wanted to make sure there was capped brood and I didn't want to take the risk of smushing Her Majesty. So relieved to see capped brood, I closed up the hive and left.

In a couple of weeks, I'll check again. I didn't do a powdered sugar shake on this hive because the varroa cycle was interrupted by the queenless problem. However, I may do a shake on my next inspection of this hive. 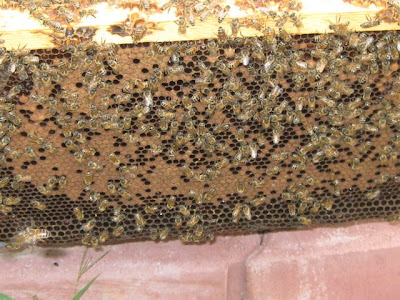